Who is Andrea Sloan?

"Who is Andrea Sloan?"

That was my daughter's question as she strolled through the living room the other night. She'd seen my tweets and Facebook posts. She'd noticed how I've been begging friends to sign Andrea's petition. But she, like many others, had no idea who Andrea Sloan is.

Hmmm... How to answer that one. Well, to start with, there's this:


And then there's the backstory: Andrea has been waging war on ovarian cancer for the last seven years. She has faced chemo, radiation, surgeries, and stem cell and bone marrow transplants. Now her cancer has returned, and her doctors say her bone marrow can't tolerate traditional therapies.

This experimental drug offers Andrea's best chance. Her world-class doctors at M.D. Anderson have seen it work well in clinical study participants, and they want Andrea to have it. The FDA says that even though the clinical trials are full, she can get it if the company will agree.

Therein lies the rub. So far, BioMarin says no. But more than 20,000 of us aren't accepting that answer.

Certainly, many who have signed her Change.org petition did so on principle alone. She's running out of options, this pharmaceutical company has her best chance, and by acting on the "compassionate use" clause, they can allow her to benefit from it. Most people "get" compassion—even when corporations don't—and that's enough to warrant signing an online petition.

For others, though, this cause is also personal. And that's because we know Andrea Sloan.

We know her as the morning herald who greets us, her Facebook friends, with carpe diem messages and encouragement.

We know her as the fighter who, even when discouraged, never, ever, EVER gives up.

We know her as a woman who is hyper-aware of the blessings that have come her way via family, friends, and yes, even cancer.

And a few of us were even blessed to know her as the sassy classmate who struck a pose behind Mrs. Johnson on our last day in Algebra I. 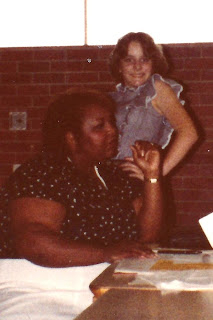 I've known Andrea Sloan for 30+ years. Through middle and high school, we shared homework projects, club meetings, classroom presentations and graduation brunches. Even though we both ended up at UT, we lost touch until Facebook reconnected us. That's when I first became aware of Andrea's cancer fight. I've been a part of "Andi's Army" ever since. It's been an honor to follow her story, to watch her triumph and struggle and fight the good fight, all while maintaining the sweet spirit everyone saw in her back when we were just crazy GT kids.

So here we are, less than 24 hours away from her big sit-down with the doctors at M.D. Anderson. BMN-673 is on the premises, and with one little "yes," Andrea can get the treatment she needs to fight this nasty disease right away. We—her friends, her ARMY—are doing everything we can to show BioMarin that Andrea is worth any risk the company may incur. We will post, we will tweet, we will beat down the doors. We will get her that drug.

Because of who Andrea Sloan is.