Here's a not-too-surprising confession: I have probably taken more photos of the UT Tower than most people take of their own homes.
But really, that's not all that crazy considering the Tower represents my home away from home. Whether it's orange in the afterglow of a Longhorn victory or ringing out its Westminster reminders of the time, it stands in the center of the campus I love, the university that has given me so much. On our frequent trips to Austin, I don't feel like I've arrived until I can see the Tower on the horizon.
I have never been able to reconcile my love for the Tower with the terrible events of Aug. 1, 1966. I wasn't alive when Charles Whitman took an arsenal to the observation deck and killed 14 people, but reminders of the tragedy were still there when I arrived on the Forty Acres 20 years later. As a student crossing the wide-open south mall, seeing the chipped balustrade, sizing up the flagpole base that provided cover for one terrified young woman, I often thought of that day. In my college years and beyond, I have watched the grainy news footage, seen the photos, read the accounts. I am certain my imagined terror does not compare to the actual horror experienced by the victims and eyewitnesses who were there, but I have tried to wrap my mind around the awful day that changed the community I love.
The observation deck was closed from 1975-1999 (because of suicides, not the shooting as many suspect), so the top of the Tower was off-limits during my college years. It wasn't until 2011 that I finally got to ride that elevator to the 27th floor. I won't lie: It was creepy to see this place that I had heard so much about, and I could not help but imagine the terror of the Gabour family as they walked in on Whitman in that reception area. As we saw the rain spouts, I recalled hearing how Whitman used them as gun turrets and how the thick walls made the Tower his fortress. 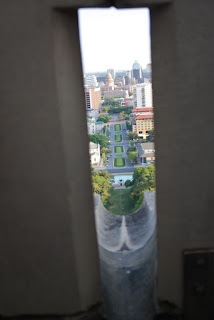 Seeing the breathtaking view, I could visualize the sickening distance Whitman was able to cover, killing his victims as far as 1,500 feet away. When we rounded the blind corners of the deck walkway, my heart beat faster, struggling to comprehend the bravery of McCoy, Martinez, Day and Crum who stepped out on that narrow ledge, knowing full well that Whitman's gun could be the next—and last—thing they would see.
But it was also therapeutic to be there. I was grateful to finally see the campus below me with downtown Austin to the south and the rolling hills to the west.
I got goosebumps to peer up at those four gold-leafed clock faces, the ones that had reminded me to get a move on to make it to class on time. 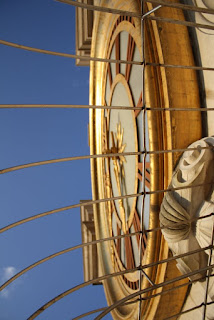 But mostly, visiting that space allowed me to reclaim the Tower, OUR Tower, as the University's. I needed that visit to take the Tower back from the man who used it for evil.

Today's memorial service was a long time coming. It took far too long for the University to honor the lives lost and acknowledge the shooting that affected so many. In fact, there was no acknowledgment on campus at all until 1999 when the Tower Garden (turtle pond) area was dedicated to the shooting victims. It wasn't until 2007 that a plaque was installed to commemorate that dedication.
Of course, in 1966 people had no real concept of a "mass shooting." Our culture didn't have the language or the rituals for communal grieving. There were no presidential visits, no vigils, no extended counseling for survivors. Regent Frank Erwin even urged campus officials to "clean this mess up" ASAP. It's as if the powers that be thought removing any reminders of the tragedy would erase it from memory.
The marker dedicated today FINALLY includes the names of those killed. My prayer is that this more appropriate memorial will bring comfort to the victims' loved ones while reminding future UT students about that terrible day in 1966.
As survivor Claire Wilson said at today's rededication ceremony, "Let this memorial remain here on this campus and in our minds as a reminder of the power that we have in each moment to become a community of love and reverence for life." (from the Texas Exes Alcalde website)

My next visit to Austin will likely be centered around the football stadium, but I hope I get the chance to wander into the heart of campus just to see the Tower Garden and pay my respects. I have no doubt that I will continue to take photos of our Tower in all its glory, but I want my next picture of it to include this remembrance, this acknowledgment of UT's darkest day.

NOTE:
The Austin American-Statesman has put together a wealth of materials in commemoration of today's 50th anniversary. The intro page to the special project is here. I was especially interested in the 3D interactive feature that points out where key figures were on the observation deck that day. The then and now photos of the Tower and surrounding areas are fascinating, too. You can also see the 1966 newspaper coverage and listen to archived recordings of police and news radio on the Statesman website.
Texas Monthly has also assembled a ton of materials to mark the day. Included at that link is the impressive "96 MInutes" oral history compiled 10 years ago for the 40th anniversary of the tragedy. It's not linked on TM's archive page, but "The Madman on the Tower," published in 1986, is another good account.
Posted by See-Dub at 11:45 PM No comments: