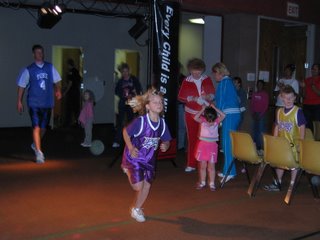 Once again, K_Dub scored all of her team's points: 12 today. So far for the season, she has scored all but 2 of her team's points! Now that the season is nearing an end, we're wishing we had kept track of her point totals from each game. We recall that her team won their first game 12-6, with K scoring all 12. Their second game, she scored an amazing 20 points, and her teammate added another 2--to no avail. It was a barn-burner. After that, the point totals get fuzzy. I was sick and missed one game, and other games have been so frustrating, that the numbers just fall out of our heads. We think she had 8 points last week, so we know she has at least 52 points with two games to go.

Anyway, she is a joy to watch on the court. Her ball control, her tenacious defense, her ability to make some really tough shots while being guarded by a girl who's a foot taller than she is--WOW! Other parents compliment her mad skills each week, and we've noticed that the opposing team goes on a scoring tear during the two quarters when she's on the bench.

Our outing to the game and to the 99-cent Store complete, we're back at home, ready to snuggle up and stay cozy. The temperature's dipping below freezing for one of the few times this winter, and freezing rain is falling. Not much is sticking yet, except for on our deck where B narrowly avoided becoming the first casualty of the storm while he was getting firewood ready. It's been too hot lately for coffee, so I'm off to brew some for this chilly day. Speaking of chilly/chili, we're having Frito pie tonight.
Posted by See-Dub at 12:50 PM

Email ThisBlogThis!Share to TwitterShare to FacebookShare to Pinterest
Labels: Katie