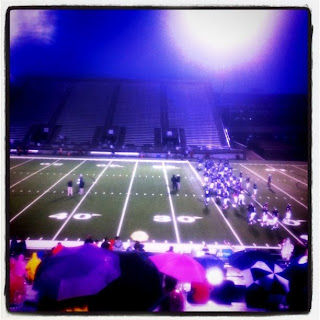 The fourth game of our second season as band parents turned into quite the adventure! Rain thinned out the crowd quite a bit before kickoff and caused the cancellation of Middle School Band Night. The high school band and drill team didn't even stick around. But with my iPhone encased in a zipper baggie and myself wrapped in an old poncho, I was in for the long haul. Katie was, too, since she wanted more time with her peeps. 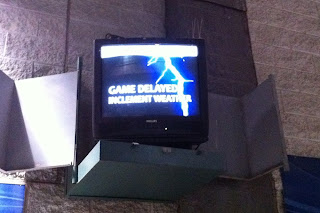 Then lightning sent us all scurrying for cover. No amount of plastic could protect us from THAT. 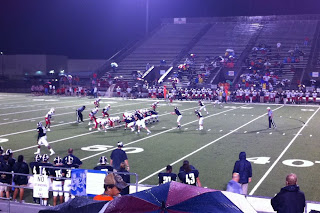 Finally the game resumed, but it did not go the Rebs' way. Luckily for me, I had volunteered to help clean the stands, so I got to stay until the bitter end. Yay.

Here's the thing about cleaning the stadium: Just when you think you've seen the nastiest, most vile trash ever, something else tops it. Of course, picking up leftover food is always gross, but when it's wet? ICK. That half-eaten chopped beef sandwich? Even MORE fun to pick up when it's soggy. That still didn't win the nasty prize, though. That award went to the pantyliner pad that was in the outer concourse, followed closely by the half dozen press-on fingernails.