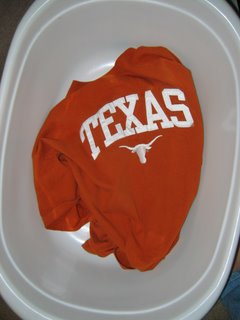 We are gathered here tonight to remember my lucky shirt, a T-shirt that had never seen defeat, never witnessed the Horns' utter humiliation...until tonight. A good shirt, it was purchased on sale at Kohl's last summer and had hopes of seeing another Big 12 championship and maybe--just maybe--another BCS championship.

This shirt's predecessor was undefeated through last year's championship season and was worn during the Rose Bowl. That old shirt was retired in January until Sept. 9 when it was put back in action for the Texas-Ohio State game. After we lost that one, it was re-retired, and this shirt, with its arched Texas, appliqued design, returned to action.

After surviving the close calls against Nebraska and Tech, this shirt seemed to have what it would take to go the distance. Alas, it could not overcome the loss of Colt, the physics-defying disappearance of our secondary, and the massive case of the dropsies that plagued our receivers and backs.

So rest in peace, lucky shirt. You'll live to be worn another day, but you will never be worn on gameday again.
Posted by See-Dub at 10:58 PM

Ha ha! Poor shirt! Sorry about the game and the National Championship :(

Charis...I found your blog; I can't remember how I did...but I am so excited to get to peek in on your precious family. You are one of our favorite people ever, and I see you are still blessing lives all around you. We are doing fine...waiting for grandchildren #2 and #3 to arrive! Love you, Jody

Jody,
I'm so tickled to hear from you! Three grandchildren? Oh, my! Love to you and Jim and your crew!