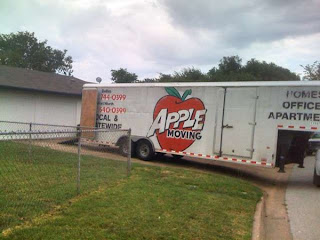 First, the GOOD* news: We moved! It took three contracts and one year and nine days, but we finally sold our beloved house.
*Get Out Of Dodge 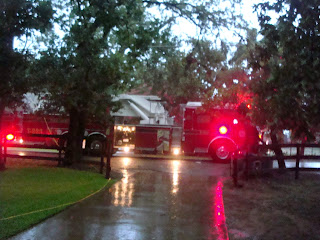 So what's with the firetruck? Long story. 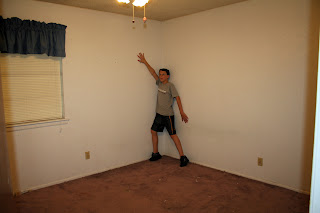 We were scrambling to get out of the house, so I didn't manage to take many photos to mark the occasion. 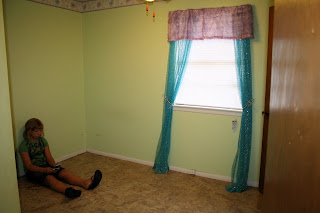 I'm glad I at least have these two, but lemme tell ya, we had 14 years worth of junk in those 1,800 square feet, and it nearly killed our eight feet trying to get it all out. Some of our more fragile items we took to my mom's, to friends' houses or to Brett's folks'. But the rest? Some stuff was trashed, Goodwill got a ton, and the majority of the remainder went into our storage unit. Talk about a real-life game of Tetris! By the time the professional movers stuffed our big furniture and appliances into that space, it was hard to imagine getting a toothpick to fit in the remaining gaps. But my husband is a miracle worker, and he kept taking vanload after vanload to store.

By the end of that Friday, we were all exhausted. Physically we were beat from the heat and the manual labor, but emotionally we were drained, too. Earlier in the day we had to take ChaCha to the kennel that will be her home until we're settled. That was brutal. And of course, it was hard saying goodbye to the only home the kids have ever known. Our little castle there in Dubtown had seen birthday parties, Christmases, countless bedtime stories, family dinners, movie nights, video games...

During that last week, we indulged in one last late-night swim, and as we floated there, reminiscing, Brett recalled for the kids our life in that house.

"One day your mom came into the kitchen right in there and told me she was pregnant," he told them. "Then I blinked, and now here we are."

So we have finally overcome the ginormous hurdle that was selling our house. Of course, it would've been too easy to move straight from that house into another one, so wouldn't you know it, we fell in love with a house that's a "short sale." We REALLY like this other house, so we're willing to wait out the 30-50 days it may take for the bank to approve our offer. We considered renting an apartment in the meantime, but since we weren't willing to sign a (minimum) three-month lease (just in case we get lucky with the bank's timing), instead we moved in with Brett's parents.

Nana and Papa were SO gracious to allow us to come in with our computers and games and EIGHT suitcases (not to mention clothes to fill three closets), PLUS our noise and mess! Nana even offered to cook for us! Truly outstanding hospitality all the way around. So what do they get for their kindness?

First, they got to repair their air-conditioner. We had been living there for barely 24 hours when we all smelled something burning. Turns out the A/C motor was toast. At 9:30 on a Saturday night. Hello, weekend service call! We laughed about how the "black cloud" of home repair had followed us to their house, but then...

Remember the firetruck? About that.

A pretty intense thunderstorm rolled through yesterday morning. I was eating breakfast when a deafening clap of thunder startled me, Brett and Papa. The power surge—and the flash of light that came with it—sent Brett and me into the sunroom where our computers were plugged in. Everything was on a surge protector, but as we were getting it all unplugged, we heard screaming coming from Nana and Papa's bedroom.

There are some events you can relive in video, but not this one. From that point on, I just see snapshots. I see Ryan and Katie in their bare feet. I see our computers on the table. I see Nana running down the hall. There's some yelling and some futile attempts to use the cordless home phone. Then Brett and I are grabbing fire extinguishers: he finds the one we'd brought from our house, and I grab the one from Nana's pantry.

(This is turning into a Faulkner short story with all the flashbacks. Mea culpa.)

Here's the thing about the fire extinguisher. At VBS just a couple of weeks ago, the "scribe shop" was melting candle wax. Because flames were involved, a friend made a habit of putting a fire extinguisher in the A/V booth with us each night. You know, just in case. The first night he did that, I casually mentioned that I wasn't sure I knew how to use one.

"Oh, it's simple," he said. "Just pull the pin, point the nozzle and squeeze."

Those words came in awfully handy yesterday morning. I do not for one second believe it was coincidence that we had had that conversation. And how did I know exactly where Nana and Papa's fire extinguisher was? I had noticed it when we were moving some of our food into the pantry, and for some reason, I made a mental note of the extinguisher's location. (Maybe because of the A/C motor burning?)

So we run down the hallway, and I knew just what to do. Pull the pin, point the nozzle and squeeze.

(I didn't know it, but Brett was right behind me with our old fire extinguisher, but because it had gone off in my car last week, it was useless.)

This story already has half a dozen sidetracks; what's one more? WHERE ARE YOUR FIRE EXTINGUISHERS? GET FIRE EXTINGUISHERS IN YOUR HOUSE! KEEP THEM HANDY! Turns out they're pretty easy to use, and my goodness, they get the job done!

Because of that one (working) fire extinguisher, the fire that started in Nana's bedroom closet was mostly confined to that closet: 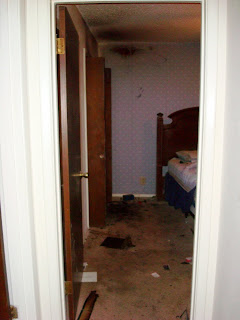 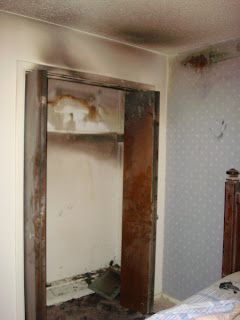 We feel certain that if we had to wait for the fire department's arrival, the flames would've engulfed at least the bedroom. 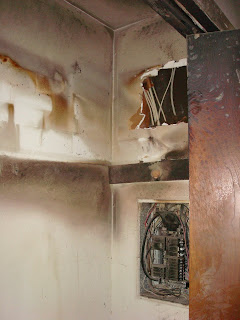 This breaker box was the culprit. A lightning strike started the whole shebang. 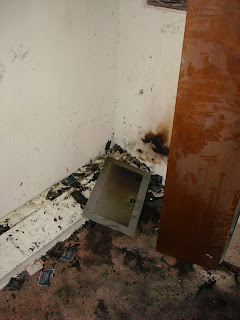 We're so very thankful that the fire was confined to that one closet. Of course, the smoke was HORRENDOUS. In fact, there was so much smoke, we were terrified that the fire had spread to the attic. Thick, choking smoke just inundated the house so very quickly. After getting the kids out, I grabbed the laptops and my purse. We made one or two more trips in to retrieve Ryan's glasses or Katie's shoes, but the smoke! Oh, my goodness, the smoke!

When the fire department arrived, they turned on their heavy duty fans and pulled out the still-smoldering remnants of Nana's wardrobe. 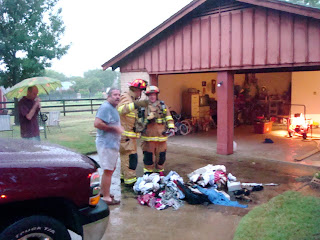 I felt so guilty that all of our stuff, packed into every one of her other closets, was spared, but her clothes were destroyed. 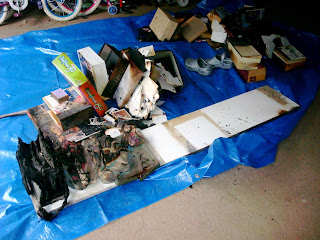 Sadder still to see the keepsakes the firefighters pulled out. Baby shoes, bags, pictures, even our beloved Trivial Pursuit games—gone. (Those Crocs must be made out of some super-substance, though!) 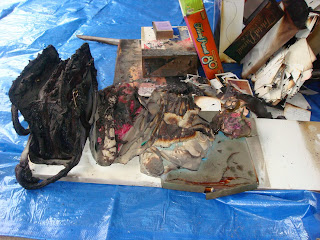 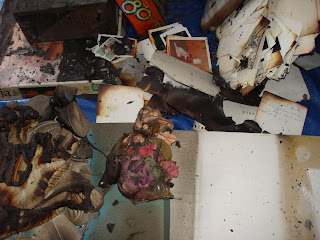 It was so sad to see these things damaged, but my, oh, my, are we thankful that we're all OK and that the house is still standing! 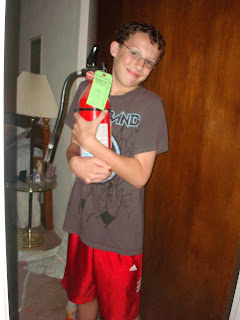 We are now big fans of fire extinguishers!

So now what? The smoke smell and soot permeated the house, so Farmers Insurance sent a cleaning crew to wash clothes, linens, etc. and wipe down all the interior surfaces. (The crew was there within four hours of the fire, by the way. Impeccable service from Farmers!) Because the house is uninhabitable for now, the six of us will be living the "suite life" for a few days.

To kick off our hotel living, we picked up some Popeye's chicken and had an old-fashioned "football picnic": 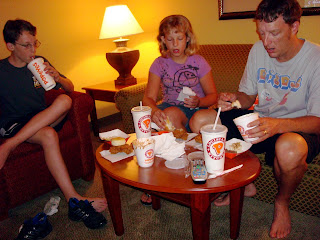 Then we settled in to watch the Cowboys-Titans in HD: 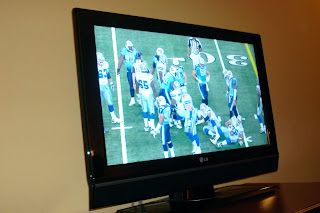 Even though yesterday had more than its share of "Are you KIDDING ME?" moments, my heart is filled to overflowing with gratitude.

I'm so thankful for our real estate agent and friend who has worked so hard for so long to help us sell our house. I'm so thankful for everyone who offered to help us move (even though we didn't get to take them up on it since our closing was bumped up a day). I'm grateful for those who have offered to let us stay with them until we can move into our own house (although in light of recent developments, I'm sure they'd reconsider that offer lest their own homes implode somehow). And I'm blessed to have good friends willing to listen to me whine about either my inability to sell the house or the fact that it did sell.

I'm so thankful for my friends at school who were so supportive when they got the call yesterday. I'm grateful for Nana and Papa's amazing neighbors who came out of nowhere with support: donuts and drinks for breakfast within half an hour of the fire, muffins delivered to the front yard not long after that. I'm reminded once again what a blessing it is that Brett's sister and brother both live here. I'm touched by the texts, the emails, the phone calls, the Facebook messages that have offered help. And I'm thankful that the insurance company managed to put us in a hotel with an indoor pool!

I just love your sweet family. I hear your heart!! It's so difficult to feel grateful and peace-filled all the while feeling a little bit of remorse, fear, anxiety... Been there!
So glad you all are safe!