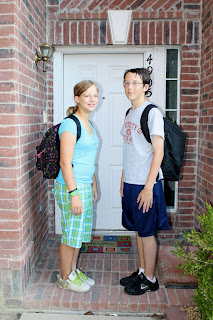 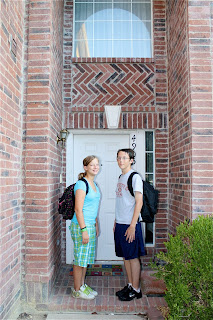 Both Katie's middle and Ryan's high schools have later start times, so we were able to be a bit more leisurely taking our annual first-day photos. But even nicer than that was being able to take our front door shot outside our very own front door this year!

Last year the Great Closet Fire of 2009 had landed us in the Holiday Inn Express, so our traditional picture was taken just outside the hotel lobby: 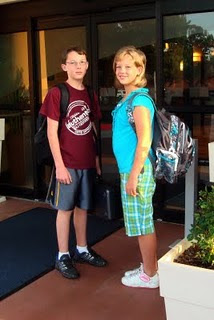 Can't you just feel the "Mom, hurry up and TAKE THE PICTURE before someone SEES US" that both kids are trying to convey? By the way, we were back at the HI Express at the end of the school year, too. 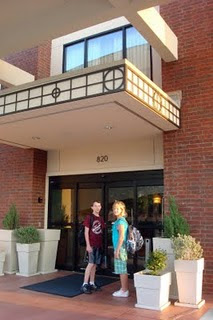 So HOORAY for having a home! But can you believe how much both kids have grown since last fall? If I really wanted to get all maudlin, I'd look at the 2008 "front door pose retrospective" post, but that may just do me in, considering my current state of fatigue. Instead, I'll go back to this classic from Ryan's first day of kindergarten, previously un-blogged: 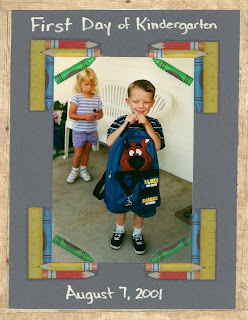 Is that not precious? Ryan was so proud of his Scooby backpack, and Katie had this distinct feeling that she was missing out on the fun.

Well, she's left out no more. Even though the first day means we're back to the grind, it's nice to know we have two veterans of this whole school thing who can strap on their backpacks and knock 'em dead!