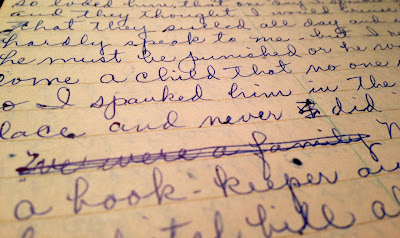 I started transcribing my grandmother's account of my father's hemophilia waaaaay back in 2008. Back then, I was working from a color copy of Granny's steno pad. Recently, my uncle sent me the original notebook, which reminded me that I never finished typing up her priceless recollection of my father's health challenges.

So here, after a four-year intermission, is part 3 in my grandmother's words:

Then when he cut some teeth, he had to have small amounts of blood transfusions, and luckily my husband was able to give them. Often he ran into a door and would have a huge bruise (or internal bleeding) and required blood, then one day he fell and bumped his forehead and both eyes turned blue. He looked like a raccoon. We laughed and he laughed and then more blood—but as soon as the problem was over, he played and was an extremely happy child. Our daughters both sang and he especially liked them to sing to him, and of course, they delighted in that. They so loved him that one day I spanked him and they thought I would bruise him, that they sulked all day and would hardly speak to me. But I realized he must be punished or he would become a child that no one would love, so I spanked him in the God-given place and never did it bruise him.

My husband worked as a bookkeeper and we were having a hospital bill about every two months, so besides our baby having problems, we were told the house we rented was sold and we would have to move. As the war was in full force and two Army bases here, it was almost impossible so we moved to an upstairs apartment. Then one day I went up the outside stairs and Jim came running behind. He was four years old and just tall enough to hit his head on the corner of the banisters to the staircase and knocked a small hole in the crown of his head. I grabbed him and ran upstairs and applied cold compresses to his head and it stopped bleeding as far as I could tell, and when bedtime came, I put him to bed thinking all was well. About 2 a.m. I awoke for some unknown reason. I turned the light on and looked at Jim and he was bloody from his head to waist and as pale as the sheets. My husband jumped and called the doctor, and there was no answer. He was out of town. Horrors! What would we do? No one else knew his problem, and we were frantic. At every heartbeat the blood would spurt. Unless you have been told that a doctor would not see your baby who was bleeding to death because he was a hemophiliac, then you can't imagine the emptiness we felt that night. For months I had nightmares of this experience. My husband called the hospital. We were told to bring him over and a new doctor, whom we had never met, would see our baby. This doctor who had just moved to Victoria came and put a pressure bandage on the wound, then in an hour or so he had to be called back and change it again and he came each time it was necessary. In the morning my husband gave blood, my husband's sister, who also was the same type, gave blood, a postman gave blood, and my brother came 200 miles and gave blood, and then we could find no more. At that time we did not have blood banks, and it was difficult to get Type O RH negative blood. We were using plasma, but his RBC was so low, so after five days the doctor said he was sending us to a specialist in S.A. (San Antonio). Of course, with all the expenses, our resources were depleted. The doctor said everything was arranged to go on rapidly and they would be waiting for us there. I shall always remember and highly esteem this doctor for doing so many wonderful deeds for us, as he never failed to come each time he was called, day or night.

We arrived in S.A. and were met at the entrance there. My husband was taken off to give more blood, and my brother and I were left with the baby in his room while they prepared for surgery. They came and gave the boy a shot and he was crying and my brother was holding him and he had a convulsion. I had never seen anyone have a convulsion. I was frightened and knew he must be dead, but then he opened his eyes and I knew he was all right or at least alive. Then a nurse came in and took him away to the operating room. The doctor said, "Hold on, I will." I was overcome with grief, anxiety and fatigue. Then my husband walked in. He and my brother were horrid sights. Their shirts were bloody from shoulder to waist from handling the boy. Then we all wept and prayed as never before. A nurse came in, gave me a shot and put me to bed in the room. She did not say a word, just patted me on the back and held my hand for over an hour. We had called a minister whom we knew in S.A. to come, and soon after he came, the nurse left. Then after what seemed an eternity, the door opened and there was the doctor holding our boy, whose head was completely bandaged. He was awake and holding out his hands for us to take him, but the doctor said he must lie down in bed. He told us about the surgery-packing, etc. Again, I have nothing but praise for another doctor who had done so much for us and had never seen us before. He said, "I don't know about your finances, but it doesn't matter as you need a private duty nurse tonight" as he needed constant professional care. After three days and nights with only winks of sleep, I went to bed next to our baby's bed, and I did sleep spasmodically. My husband and brother went to a hotel nearby. The next morning, the bandages still were snowy white. It was a beautiful sight to behold. The sun was shining in, and it was the dawn of a new day.

Email ThisBlogThis!Share to TwitterShare to FacebookShare to Pinterest
Labels: A Sketch of Jim, Daddy, family, Hemophilia