The agony of defeat and the thrill of barbecue.

It had to happen sometime.

The Horns had won 21 in a row, but the streak ended there with the loss to Ohio State. I was disappointed because I could see how we could've and should've won, but I just didn't have it in me to get too worked up about this loss. I think I'm still too full of that good Rose Bowl mojo to fret over this one. Or maybe I was just too full of barbecue!

In spite of the game's disappointing outcome, we still had a great day. The tailgating was out of control! The people and tents were EVERYWHERE. At our tailgate, the food was everywhere! We had plenty of Salt Lick barbecue, which was a good thing considering the number of folks who dropped by. 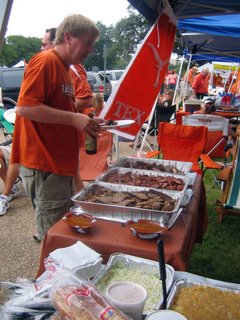 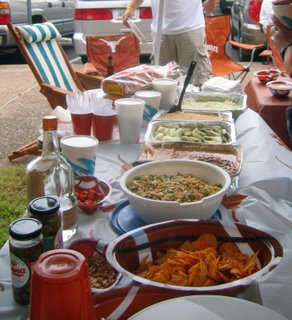 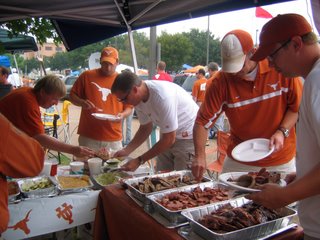 Throughout the day, we watched the throngs of Buckeye fans parade past our tent. We also got to visit with some old friends from our college days and new friends from our seats in the stadium. We took advantage of our neighbors' satellite hook-ups to catch some of the other games, and when the F-18s flew over us during the ESPN Gameday broadcast (and later during pregame), I got goosebumps. 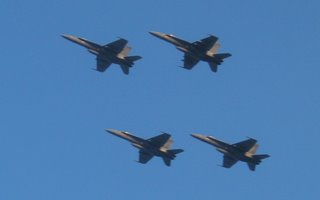 DKR was packed with a record-setting crowd (89,422, which they announced as the largest to ever see a football game in Texas), and it was a gorgeous day for football. 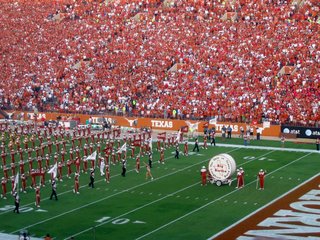 At halftime we were treated to two great college marching bands, and both did their script drills. It was cool to see tOSU's band dot the "i," but I'm still partial to Script Texas. 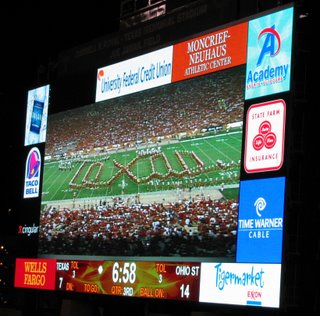 After the game, Texas fans heaped good wishes on the Buckeye fans. "Good game" and "have a safe trip home" were the most common refrains shouted at those dressed in scarlet and gray, a nice change of pace from the downright ugly treatment many Texas fans experienced last year in Columbus. Last year's game was followed with stories of fans changing clothes to avoid getting attacked while walking back to their hotel. And then there were the accounts of F-word-spewing grandmas hurling insults at the burnt orange faithful. I was afraid some of our fans would try to repay the hostility, but the Ohio State fans were overwhelmed with the classy response from their Texas hosts. I heard one coed say that we were treating them so well, the Buckeye fans would head home thinking they'd lost! Several tOSU message boards gave Texas fans credit for being the classiest fans they'd ever encountered. Now that may be a pretty weak moral victory, but I'll take it.