Tonight, Ryan and I watched the TV movie about the kid who gave Ryan his name. My old VHS tape of The Ryan White Story, recorded from the 1990 broadcast while I was still living in Austin, isn't in the best shape. The sound is a little garbled at times, and the picture isn't exactly HD. But the story? Wow.

Four months before our Ryan was born, we learned of his hemophilia. Soon after that, B and I decided that our son should carry the names of two heroes with that blood disorder. For years we've told Ryan the story. My dad's first name is Ryan's middle name, and there's not enough bandwidth in all the internet for me to explain what Daddy meant (and still means) to me. But I can try to explain why we chose to name our son after Ryan White, and from time to time, I need to retell his story.

Ryan White was a kid with hemophilia, which means his frequent bleeds required frequent factor infusions. (Sound familiar?) Then, in the mid-'80s, the factor that stopped his bleeds gave him HIV, thanks to the tainted blood products used to create clotting factor in those days. (Our factor now is recombinant, so it's infinitely safer. It isn't derived from human blood.) That's when Ryan's story becomes almost super-human. Watching the movie again tonight, I was reminded of just how much Ryan had to face. Already overwhelmed with the devastating diagnosis, Ryan, his mom, Jeanne, and his sister, Andrea, had to deal with thinly veiled fear and, in some cases, outright hatred from their neighbors. When the school district barred him from attending school, he fought the system and the townspeople's discrimination. And he won.

Ryan and his family eventually ended up in another Indiana community, one that welcomed them to their town and supported Ryan's wish to go to school. Ryan's fighting spirit drew the attention of many famous people, and he was invited to speak before Congress and countless AIDS organizations. By the time he died at 18, he had done more than almost anyone to educate the public about AIDS and how it is--and isn't--transmitted. And he had shown so many people the honorable and graceful way to face adversity.

So tonight, for the first time, my Ryan watched the famous Ryan's story on TV. Parts of the movie are tough to watch because the White family endured some devastating events, but through it all, Ryan is portrayed as a caring, gentle boy. My Ryan couldn't help but notice this. "He's just so sweet," he said. 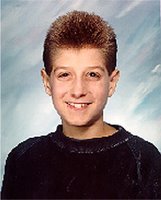 And there it is. There's the resemblance. I can see that my Ryan is not just a namesake. In his thin frame he carries more strength than many grown men. Even when he's dealt the most unfair hand, he continues to put others first. Anyone who's met him knows how sweet he is, but beneath that gentle personality is a fighter who is TOUGH.

Your Ryan really does have such a great spirit! He seems to face his challenges head-on. I always thought the way that people treated Ryan White was awful. What an inspiration he was.