Appropriate for the Cyclones.

The weather gave us plenty of excitement the night the Horns played Iowa State. We began the day with pleasant weather, and the showers that arrived mid-morning were a welcome relief from the heat. The rain couldn't stop the tailgating, but it did move us under the canopy for a while. 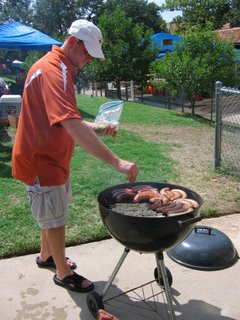 Fortunately, we were still able to have some amazing sausage and shrimp wraps, grilled to perfection. Later in the day, we were also thrilled to spend time with K&D, our friends from L.A. By the time they arrived, the oppressive heat had returned. We kept glancing to the north, though, and could tell the hot weather wouldn't be lasting too long.

At halftime the Longhorn Alumni Band took the field. It was great to see the former band members marching again. I've always loved seeing the variety of ages and outfits on the twirlers. 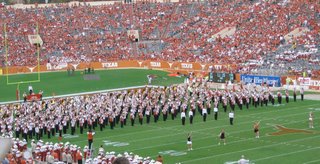 And then there's the baton guy who throws his baton a zillion feet in the air. 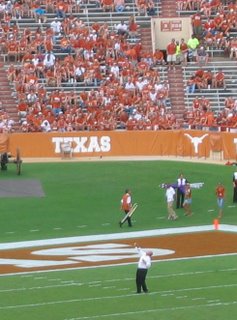 Both the alumni and current bands took the field for the grand finale. Now THAT was a wall of sound! 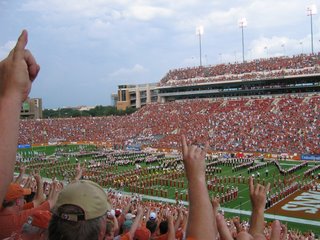 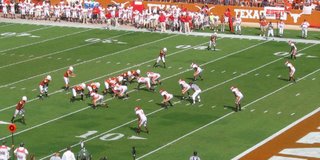 Our jubilant mood took a hit when Brian Robison was leg-whipped and went down with what we thought was a severe injury. As he lay on the field in obvious pain, the packed stands grew very quiet. We all watched as B-Rob was loaded onto a cart, but we went nuts when he raised a "Hook 'Em"! 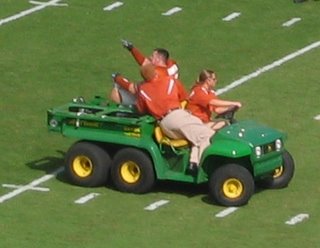 He also pointed and shouted at his defensive teammates, and we could tell that this guy's a real leader. (Later we found out that his injury was not season-ending, and Robison would be able to play in two weeks against OU.)

Throughout the game, we couldn't keep from glancing over our left shoulders toward the coming storm. By the third quarter, this is what we saw to the north: 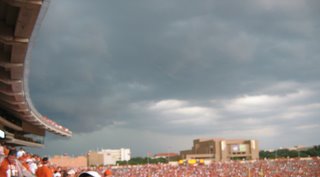 The PA announcer kept giving updates about the thunderstorm warning, I think in hopes of getting people to leave! Right around the end of the third quarter, the first flashes of lightning appeared, and all of us still in the stands were ordered to evacuate. We headed under the stands to wait for the game to resume.

When it did resume, 70 minutes later, only a smattering of the original 85,000+ crowd remained. About 2,000 people were left to watch the fourth quarter, which even ABC didn't even air. 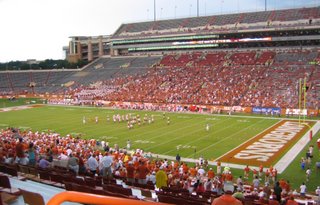 No one can accuse us of being fair weather fans!