During breaks between his day job and working on his book, Brett has been cranking out magazine articles and reviews. This week we received this in the mail: 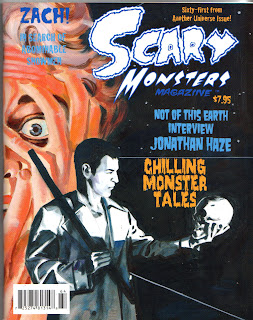 On page 43 is Brett's article, "My Scary Week with Uncle Forry," his account of meeting Forrest J Ackerman at his home in Hollywood and again at the San Diego Comic-Con. Forry is the former editor of Famous Monsters of Filmland, an influential horror magazine. We toured his memento-filled home while we were in L.A., and Brett met up with him again at the big convention later that week. Several photos from our trip illustrate his article, including this one with Forry, Brett and the kids: 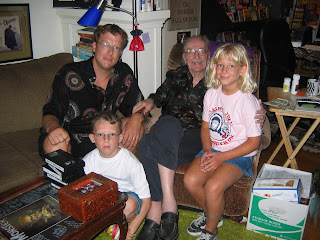 The magazine's on sale at Barnes and Noble and Border's, so if you find yourself in one of those bookstores, you might want to take a peek.

Also at some B&N stores is Comics Buyer's Guide, the world's longest running publication about comics. Brett has been part of that magazine's "Review Crew" for five years now, and every month his reviews appear in print. 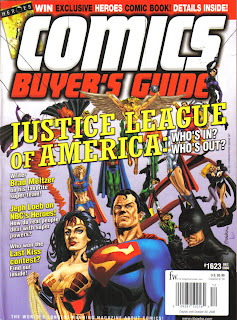 We love to see his byline, but this is all just a prelude to his book, which is VERY close to completion. His manuscript will be in the mail in a few short weeks, and we're all so excited!

Do you think it's cheating that you have a journalism teacher/editor living with you? :)

It's not cheating if you don't get caught! Oh, you just caught me...

Charis is definitely a big help. These days, she mostly helps with photography and computer stuff, but when I was getting started, her editorial skills were invaluable. I still run the occasional article by her, just to make her feel useful. Heh...

That is very exciting! Good luck with the book.