For some reason, I just can't have enough T-shirts. On vacation? Gotta get a shirt. Attend a special event? There's a shirt for that. Team win a championship? If I don't buy a shirt, it's like we never won!

But I'm taking the first of 12 steps: admitting I have a problem. When we could no longer walk in our walk-in closet, I knew something had to give. So here goes.

Several years ago my mom had a T-shirt quilt made for me, so my precious shirts from college and my early 20s had an appropriate resting place--out of my closet and onto my bed (upside down actually--the solid chambray backing showing). But I really don't have room for TWO T-shirt quilts, and just like those people on Clean Sweep, I was holding on to the shirts only because I wanted to hang on to the memories.

I've made a deal with myself: I'm virtually storing the shirts that I no longer need/wear/can be seen in in public. I'm blogging them for posterity! I can't just let them go, and cyberspace has more than enough room for my silly send-offs. Besides, shirts are meant to be worn, not collecting dust taking up space turning into a messy heap stored in a closet, and somebody might actually want or need one of these!

Now I'm still keeping every bit of burnt orange cotton in my closet, and my Brady Bunch T-shirts are pretty sacred, too. Recent acquisitions from last summer's vacation are off the table. But I'm strong. I can let go. Eventually.
T-shirt Tribute #1 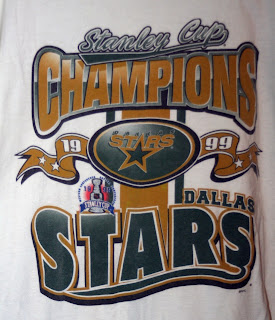 Really, I'm not much of a hockey fan, but I passively root for the Stars. I do enjoy watching the playoffs, and that season, 1999, I followed the Stars all the way into the Stanley Cup Finals. I even stayed up for the triple-overtime victory. When Brett Hull finally scored, I screamed a silent scream so I wouldn't wake Brett or the babies! When the fly-by-night sports merchandise store set up shop in that strip center by the dollar movie, I was there to pick up this souvenir.

The Stars' big win was exciting, but Stanley Cup encounters were even better. That trophy is a superstar! A few players showed off the cup at a UT football game, and as soon as fans saw the Cup's gleaming silver, they started cheering. Another time we got to see Stars players with the Cup was when we took three-year-old Ryan to a Ranger game that summer. It was a real goosebumpy moment. Everybody in the stands went nuts, not when they saw Langenbrunner or Modano, but when they saw THE CUP. Ryan, vaguely aware of the championship, said, "Look! There's Stanley's Cup!"

I've taken students to the Stars' High School Media Day, and every time we're in the Stars Center, I love to see the pictures of that championship team celebrating on the ice with "Stanley's Cup."
Posted by See-Dub at 9:15 PM

that is so funny--I took pics for the same purpose last summer--but didn't blog about them...

and, my mom's always talked about doing a t-shirt quilt, too--so I even have t's she saved from my childhood!