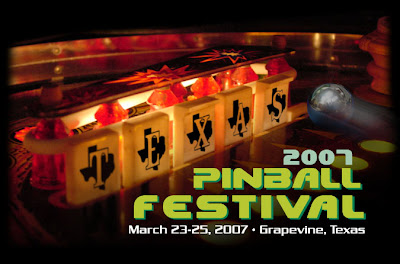 It's a lonely ol' Saturday night for Mom! Brett and the kids are in Grapevine for a pinball convention, and at last report, they're having a blast!
They left the house at 7 this morning, and I'm sure they've played a ridiculous number of pinball and video game machines by now. Ryan ran into a friend from school, Brett was enjoying the piped-in '80s music, and Katie entered the kids' tournament. Brett's former roommate went with them, too, and I'm sure they've all played their hearts out on the more than 100 games, all set on "free play."
While they were going nuts on the machines, I was going cross-eyed judging at the UIL district academic meet, and then I was waiting for my two students' results. (Both advanced to regionals in feature writing! YIPPEE!!!)
Brett forgot to take the camera to the convention, which is so disappointing. I would LOVE to see the kids in that environment, and I can't imagine the craziness of that convention hall. Instead, I'll look forward to hearing the full report when they get home late tonight.

How fun!! I love how he shares his love of gaming with the kids. What time did they make it home? Seven in the morning on a Saturday - that is dedication!

They got home "early": a little after 11! They were weary but so glad they went!

Brett said it was the perfect gaming event for kids and parents since the convention had such a mix of activities and events. I hope it's an annual festival!

How cool- didn't know there were pinball conventions!! Sounds like they had fun and hope you had a good day without the fam.