...or "What We Don't Know About Cats Is a Lot" (to sort of quote Olympia Dukakis in Moonstruck).

So we knew KitKat was pregnant. (I know, I know--we're terrible pet owners for not having her spayed before this happened. Believe me, I cringe every time I think of Bob Barker and his admonition to "help control the pet population.") A few weeks ago, she was acting strangely, trying to sneak into dark corners when we'd let her in the house. We figured we were nearing D-day, so we set up a little nest for her on the deck. That was Saturday the 17th. The very next morning, she had obviously delivered, but there was no sign of her kittens. We looked all over the yard, and we also spied on KitKat to see where she'd go, hoping she'd give us a clue to her nest's whereabouts. Instead of spending lots of time outside, though, KitKat seemed to want to come inside just as often as before. We came to the conclusion that the kittens were stillborn or died, or that our KitKat was just an unfit mother!
So imagine our surprise when this Sunday, a full week after delivery day, we saw this: 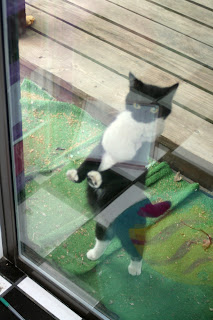 A kitten at our door! KitKat wanted to bring her little white kitten inside! I don't know if she wanted to put her(him?) in a safer place or if she just wanted us to meet her, but she desperately wanted her baby to be in the house. We let her in, and she promptly headed to the one spot where we can't easily reach her: under Ryan's bed. We pulled the bed away from the corner of the wall, and we could see this: 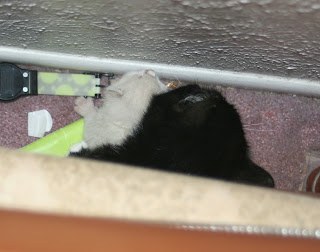 Eventually we were able to get them out from under there and back outside, much to Ryan's relief. We again tried to get KitKat to try out her box, and for a little bit, she and Aunt ChaCha considered that possibility: 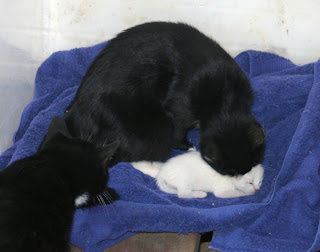 By the time we got back from our small group, KitKat had moved him/her, and it wasn't until Monday that we discovered her hiding place--and Katie discovered another kitten! Baby #2 is gray and striped, suspiciously like a particular tom around here. (The white kitten's father figure is still a mystery.) Then today, Katie spotted a third kitten, and she says it's black and white.

But so far, this white kitty is the only one we've really seen up close, and it's the only one with a name (subject to change). We thought the kittens had died, and this baby's white as a ghost. So we are proud to introduce... 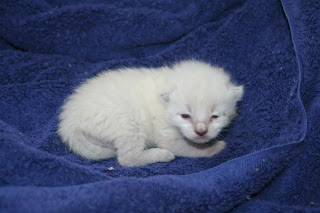