Swimming with Cindy and other randomness.

On our way to McGregor, Aunt Kelly had some treats for Ryan and Katie. Knowing how much Brett likes The Flash, she and Uncle Mike had gotten some Flash candy for the kids and Dad. 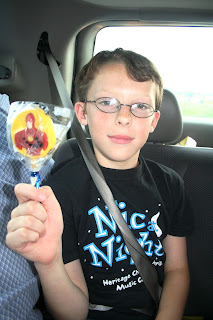 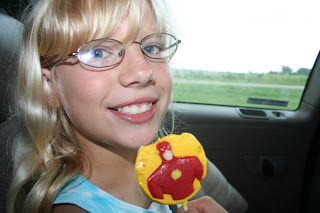 Upon arriving in McGregor, we went to the funeral home for the visitation. We saw lots of Papa's relatives and friends, and it was nice to put some faces with names we'd heard Papa mention. And of course, it was really good to see Aunt Norma's family, even if it was under these sad circumstances.

Later, we checked into our hotel and discovered the place was packed. Now why would a hotel in little McGregor, Texas, be so busy on a Sunday night? Well, it has something to do with the town just up the road: Crawford! As soon as we pulled into the parking lot, we could see folks unloading their protest signs. Political T-shirts ("Impeach Bush," "Kucinich in 2008," etc.) were everywhere. I'm pretty far to the left of just about everybody I know (there it is, my little secret), but these folks are WAY more liberal than I'll ever be! The kids had lots of questions about the war and the protesters. Brett (who is considerably more conservative politically than I) would give an answer, I would respond to his answer, and then we'd both decide to change the subject--our own tried-and-true peace initiative.

The kids were anxious to swim, so we changed into our suits and headed to the pool. There we found ourselves outnumbered by the protesters. It took a while to realize it, but in the middle of the crowd, sitting in the corner with her laptop, was Cindy Sheehan. (Apparently she had just closed on her Crawford property and was about to embark on a protest march on Tuesday. We found out later that she had just announced her plans to run against House Speaker Nancy Pelosi if she doesn't pursue impeachment proceedings against President Bush.)

It was crazy to be in the midst of 40 or so people who have devoted their lives to ending the war. Some had their RVs parked on site; others were staying in the hotel rooms. Several were taking pictures; a few were doing their laundry. You could tell they were off duty, just relaxing, exchanging stories. They shared a unique camaraderie, and it was surreal to see them there in Small Town, USA. And it was really bizarre to see the Camp Casey mom herself jump in the pool, clothes and all!

Anyway, after swimming we headed back to our room and found King Kong on HBO. Brett and the kids had fun watching the rest of the movie together: 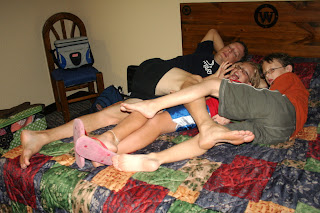 We eventually got to sleep. On Monday morning, we were off to the funeral and graveside service: 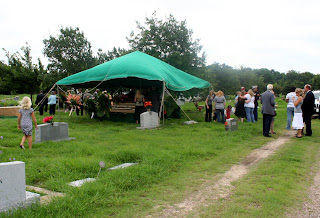 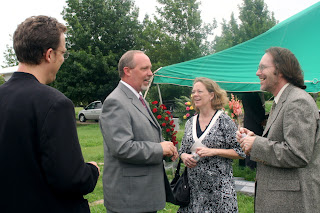 How sad and wonderful is it to gather your family for a funeral? It's wonderful to be together to remember and pay respects to the one who's gone, but what an occasion for a reunion! I guess we've hit the age where we go to more funerals than weddings.

Email ThisBlogThis!Share to TwitterShare to FacebookShare to Pinterest
Labels: family

So sorry to hear about your Aunt Norma. I know exactly what you mean about having a reunion and funeral at the same time. It always seems sad to me that the one that passed away would have enjoyed the reunion more than anyone. It makes you think why didn't we do this before now?

Interesting about the political protest you ran into. I'm sure you wished you could have been a fly on the wall in some of those conversations.

What a strange hotel stay! I am sorry about your Aunt Norma.

Mark has always accused me of being a closet democrat. The truth is that I cannot stand politics!! I think this country is way too divided and it is only getting worse. Just my side rant!