You know you're a geek when you take pictures of your computers!

Over the last few weeks, these guys have been my best buddies—if you go by waking hours spent with them, at least. It's cool to see pictures of old computers we used to have, so maybe we'll get nostalgic over these shots someday. 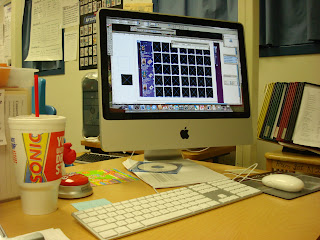 My school iMac is a far cry from the Apple II or even the Mac Classic we used back in the day! 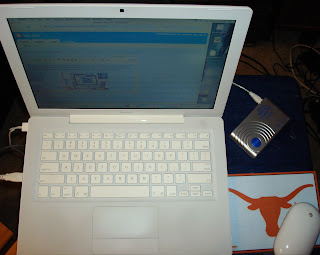 And then there's my personal Mac, my pride and joy. My MacBook is already "old" and "fat" now that the MacBook Air has been released. (Somehow, those two adjectives help me relate to my laptop!) 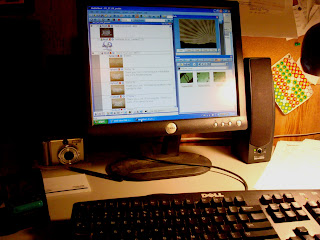 Our Dell is pretty much Brett's computer now. This is the birthplace of his book and most of his published articles. Brett's kind enough to share the PC with me so I can "Shout," though! We use MediaShout for our church presentation software, but so far, it's not available for Macs. At this desk is where you'll find me most Saturday afternoons. 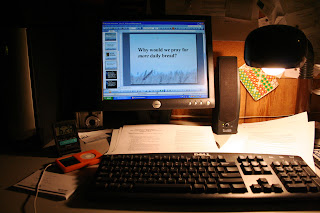 While I'm at it, I'll use the PC for Powerpoint now and then, too... 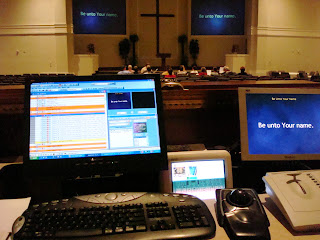 And then there's the booth PC, my pal on Wednesday nights and every third Sunday morning! It's so sweet to run dual monitors, including the supersized widescreen on the left.

Now my techno-time capsule is complete for February 2008! Wonder how long it'll be before these machines look as out of date as our Commodore 64?
Posted by See-Dub at 11:53 PM