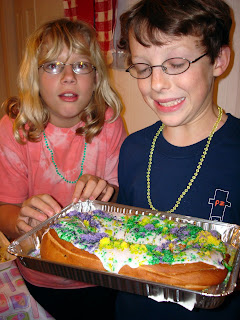 Years ago I just happened to stop at the grocery store on Fat Tuesday. Seeing the king cakes for sale, I went ahead and picked one up. Well, with that pastry, a tradition was born. Every Mardi Gras since then, I've tried to sneak in a trip to Albertson's so we can partake in this annual ritual. 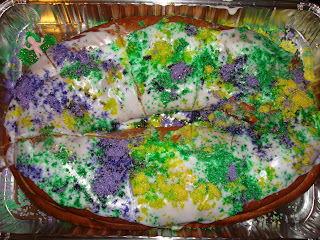 My job—besides buying the cake—is to hide the baby (top left) inside the cake. I am TERRIBLE at this job! I can never conceal it so that it's not obvious where the baby is. The kids used to be pretty competitive, wanting to be the one to "discover" the baby in their bite (ew!). These days, though, they know whoever picks the first slice wins since it's ever-so-easy to tell where the plastic thing is. 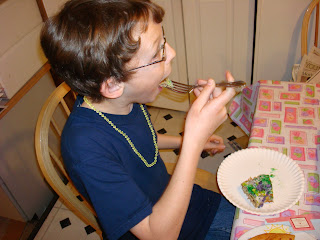 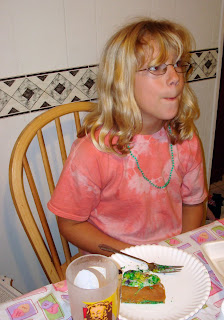 We're miles away from Mardi Gras (in more ways than one), but this annual Fat Tuesday indulgence sure does spice up a school night at our house!

EDITED TO ADD: Here's the history of king cakes, as written on a card in the pastry box.

The King Cake is believe to have originated in France around the 12th century. These early Europeans celebrated the coming of the wise men bearing gifts 12 days after Christmas, calling it the feast of the Epiphany, Twelfth Night or King's Day.

The main part of the celebration was the baking of a King Cake to honor the three kings. The cakes were made circular to portray the circular route used by the kings to get to the Christ Child and confuse King Herod, who was trying to follow the wise men so he could kill the Christ Child. In these early King Cakes, a bean, a pea or a coin was hidden inside the cake. The person who got the hidden piece was declared King for the day, or was said to have good luck in the coming year.

In Louisiana, Twelfth Night also signifies the beginning of the carnival season, which ends on Mardi Gras Day. The beans, peas and coins have been replaced by a small plastic baby to symbolize the Christ Child. The person who gets the baby is expected to carry on the carnival festivities by hosting the next King Cake Party.
Posted by See-Dub at 10:50 PM

Can you explain the significance of the baby? I am clueless.

I ran across a link that made me think of you. Let me know if you can't open it.

Since I posted this, The Cars' song keeps running through my head!

I added the explanation that came with the cake, but I have a hunch that the baby was the idea of dentists who anticipated people breaking their teeth while eating!

Thanks for the video link! That was AWESOME!

Look what I have learned from blogging :)

I always wondered about that cake. I almost bought one at Albertsons also. Whew, I was so close to starting a tradition. How does it taste?

I've never met a cake I didn't like. Even if they are educational. I'm not sure if it's Selma or Schertz that is the speed trap. Unfortunetly Lee knows.