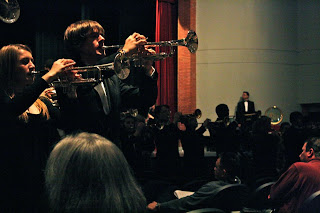 (Ryan's in there! See him? I'm not a fan of photography in darkened auditoriums!)
After all the hoopla of the Rose Parade, the Rebel Band's winter concert was a real change of pace. The top bands performed some of their concert pieces, the All-State Band members performed their etudes, and then the RHS portion of the All-Birdville Marching Band played their Bandfest salute to armed forces and this number:

Since the band played "American Woman" countless times in rehearsals—not to mention along the parade route—that old Guess Who tune will forever be the theme song of the big Tournament of Roses trip. I can see a day in the not-too-distant future when hearing "American Woman" on the radio will bring a tear to my eye as we remember that week in Cali!
Posted by See-Dub at 10:58 PM