2011 in review: The stories behind the Christmas card.

What a year it's been! Here are the photos that made the cut for this year's Christmas card. 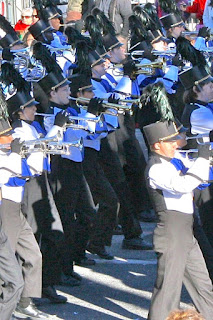 January 1: The All-Birdville Band performs in the Tournament of Roses Parade
I still tear up just thinking about that amazing moment: seeing Ryan marching in the Rose Parade in Pasadena, California! The BISD band's invitation to march in the parade is a testament to the district's excellent music programs. Ryan and his bandmates worked hard to practice for the parade once the marching competition season ended. They also had to train to have the stamina needed for the 5-mile route. Seeing the Rose Parade in person was on my bucket list, but it was so much more thrilling to be there for Ryan's big moment. (We also had a blast in the days leading up to the parade, too, spending time at Disneyland, Magic Mountain, Hollywood and our dear friends' house.) 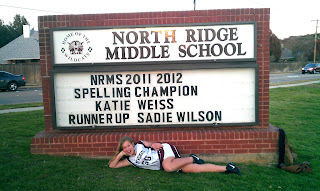 December 7: Katie wins her school's spelling bee
The texts started coming toward the end of first period. I was at work, but Brett was in the audience, watching Katie in the spelling bee. I had a hard time focusing on Beowulf because I couldn't wait for more news from the bee! Finally, the text arrived: Katie had won! Those hours of practice and all the Post-Its with spelling words stuck all over the house had paid off. Katie now is preparing for the district bee in February. 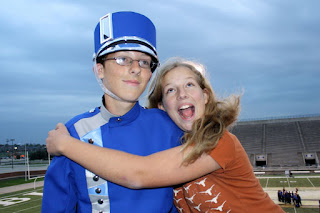 November 1: The RHS band performs its contest show
The fall marching season culminated with the RHS band competing at the BOA Super Regional contest in San Antonio. Before leaving for that event, the band played in its home stadium one last time. Ryan and the rest of the band spent many hours in the brutal August and September heat to perfect this show, but wow, was it worth it. We loved watching "The Diary" come into being with each performance, and we were so very proud of our favorite baritone player. 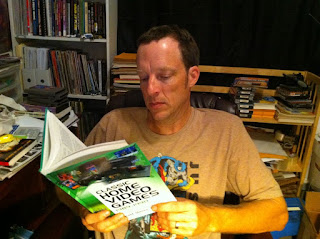 August 15: Brett's third book arrives
After months of hard work, Brett finally got to hold his latest pride and joy: Classic Home Video Games, 1989-1990. This third volume of his critically acclaimed book series covers Sega Genesis, Neo Geo and TurboGrafx. The book is available via Amazon, but Brett's really looking forward to taking it to some gaming conventions in 2012. 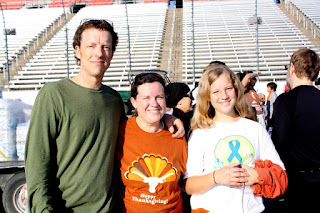 November 24: We run our first 5K
OK, so Brett and Katie ran the 5K while I mostly ran it! Still, this was a huge accomplishment for my previously sedentary self. This event, a fundraiser for the North Tarrant Food Bank, was at the Texas Motor Speedway, and it was a trip to run on the track usually reserved for race cars. Brett and Katie were pros, finishing with great times (especially for rookies). My time wasn't so fast, but at least I finished! I never would've even considered running if not for Couch to 5K, a fitness app on my phone that helped me train. Since Memorial Day weekend, I have run three times a week with few exceptions. The result: I have lost 27 pounds and can now run for 30 minutes straight. (With more training, I hope to actually run a whole 5K soon!) 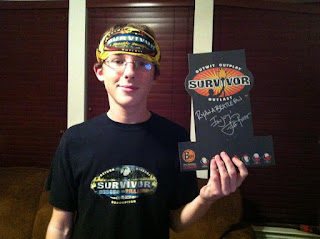 December 14: Ryan wins a Survivor buff
Our son has an addiction to the reality show Survivor. He knows all the trivia; he even knows many of the contestants through Facebook and Twitter! On this particular Wednesday night, host Jeff Probst answered a question Ryan had asked him. (You can see Jeff's answer on his Tout site.) A few days later, Ryan received his buff along with Probst's autograph. It was a deserving prize for the world's biggest Survivor fan. Among his Survivor-related activities was an online game, complete with alliances and immunity challenges. Care to guess who was the sole survivor after the last online tribal council? 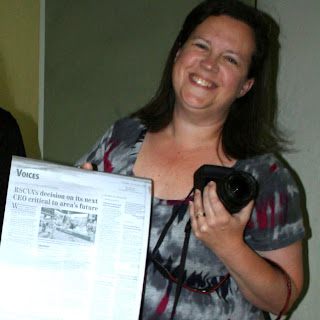 July: I attend the Reynolds High School Journalism Institute
The two weeks I spent at the University of Nevada, Reno, was one of the highlights of my teaching career. The high school journalism teachers in the institute stayed at the Silver Legacy Resort and Casino, took classes at UNR and produced an online newspaper. Along the way we learned so much to take back to our newspaper staffs and formed some great friendships. All of us fellows were wined and dined and treated to some amazing excursions, including dinner at a Basque restaurant, a trip to Virginia City, Nevada, and a weekend visit to Lake Tahoe. Watching Twelfth Night while huddled under a blanket on the sandy Tahoe shore isn't something I'll soon forget. 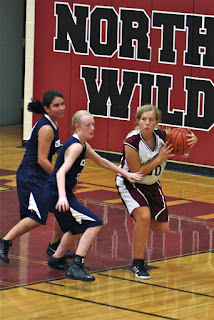 November 17: Katie returns to the basketball court
It's been so much fun to watch Katie dominate the boards during her seventh and now eighth grade girls basketball games! She is usually her team's first or second leading scorer, but her specialty is defense. We haven't seen the stats, but we'd bet she leads the league in steals and tie-ups. The eight grade season is just now underway, but we're excited to see what this year brings on the court.


So those are the photos that made the cut. Of course, they don't tell the whole story. A more complete retrospective would have to include:

Of course, our year was not all rainbows and smiles, but we're so thankful for our many blessings. Yet again, even amid crises and struggles, we've been reminded that we are blessed beyond belief.

To our friends and family: THANK YOU for your love and support. May 2012 be a wonderful year for all of us!
Posted by See-Dub at 9:00 AM