We missed worshipping at Heritage today because of this: 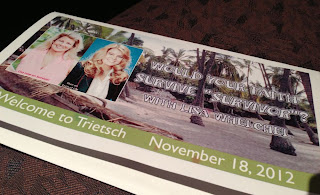 Facts of Life star and current Survivor contestant Lisa Whelchel was speaking at a church in Flower Mound, and we knew we had to be there! 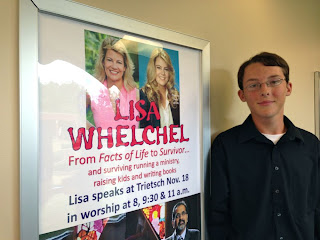 Ryan, of course, is the world's greatest Survivor fan. He has met one Survivor (Coby Archa), and he didn't want to miss the chance to meet another—and this time, she's a "current" Survivor, competing on the season still airing. 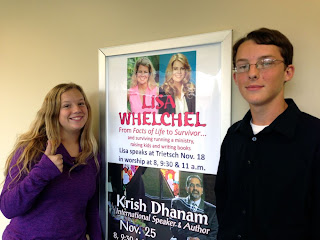 Katie is a huge Facts of Life fan and was just as excited to see Lisa. As children of the ’80s, Brett and I were looking forward to seeing "Blair" in person, too!

We arrived a little early, so we met her before the 11 a.m. service started. She was so gracious with everyone, even when our foursome threatened to monopolize her time. 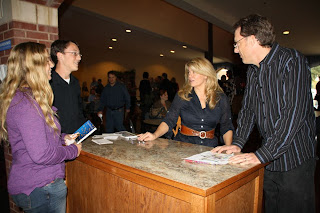 Ryan had wanted to know what she thought of Survivor host Jeff Probst but didn't get to ask her. When Brett stepped up for a photo, he asked. She said he was great—cusses like a sailor off-camera, but great! 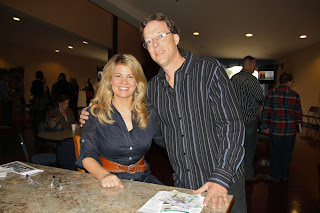 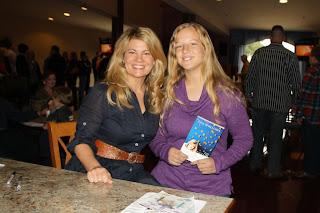 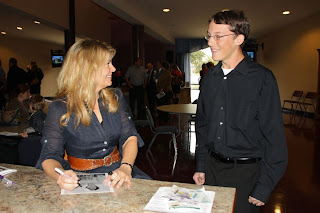 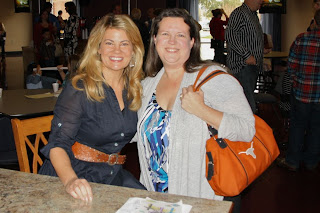 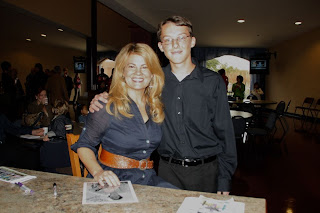 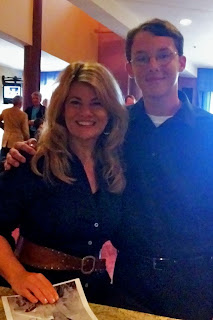 After posing for photos, it was time for the worship service. Since the worship tradition we're accustomed to is acapella, it's always interesting to experience worshipping with a choir and special music performances. As an A/V geek, it's also fun to watch how other folks handle song lyrics, announcements and graphics. Nifty. (I did feel myself leaning forward in my pew when the lyrics were a line or two behind the choir, however. You can take the girl out of the sound booth, but...)

Anyway, after the songs, it was time for Lisa. Senior pastor Dr. John Allen interviewed her, and her responses were insightful, funny and inspirational.

She told the story of her first visit to church when she was just 10 years old, and it was in that testimony that we discovered she has something in common with Ryan: a love for donuts! She and a friend had visited a church down the street from her house, and she was stunned to discover that they had donuts and orange juice there every Sunday! Those donuts, not to mention the love and acceptance she felt every time she visited, kept her coming back.

She also talked about something I struggle with, what she called an addiction to approval. She discussed this all-consuming obsession she has with making sure people like her. (Hey! I resemble that remark!) She confessed that she had tried to tell herself other people's opinions didn't matter, but it was her acceptance of God's love that has finally helped her deal with this lifelong spirit-crusher.

We were thrilled to hear her talk quite a bit about her Survivor experiences. The episode that aired just a week and a half ago featured Lisa making a big move: revealing one contestant's secret, a secret she promised she'd keep. She admitted that she's always been a big "gamer." Even when playing Monopoly with her kids, she was in it to win it. But when playing Survivor, she realized she's not playing little metal dogs and thimbles; she's playing actual people with feelings! On the island, it wasn't just about winning but about these relationships, these friendships.

She said that on the island, she struggled quite a bit with being a good Christian example on one hand while being a savvy game-player on the other. She knew that Survivors had to lie, deceive and betray in the game, and she thought she could separate those behaviors from her Christian walk. Watching this season, it's easy to see how much she has struggled with this dichotomy, so it was interesting to hear her discuss it in person all these months after filming.

By the time her days on Survivor had ended, she was so emotionally fragile that she needed some time out of the public eye to recover, she said. Now she is reliving a lot of those rough times each Wednesday night as new episodes air. She also struggles with the feedback she has received. As an approval-seeker, she said she has had a hard time avoiding the message boards and blog posts that denounce her as a hypocrite or say she's too soft for the game. Her children have told her to stay away from the online trolls, reminding her that "blog" stands for "basement-living opinion giver." (Funny!) Still, she admitted that she has a hard time avoiding those negative comments and an even harder time not taking them to heart.

On the drive to Flower Mound, Brett joked that her talk would pretty much be, "You take the good. You take the bad. You take them both, and there you have the facts of life." Turns out, that WAS part of her talk! She even sang those lyrics! (Day. Made.)

Seriously, she talked about how we all have these good parts and bad, and even as we struggle to overcome the evil within us, God loves all of us. He sees our whole selves and loves us anyway. She admitted that she spent much of her life trying to do the right things to get closer to God, but He is already with us and in us. Now she gets the concept of grace. She wants others to know that nothing you do can make God love you less and nothing can make God love you more. He LOVES us.

Thank you, Lisa, for reminding us of that and for using your time on Survivor to spread that message. And even though you don't need our approval, you've got it! 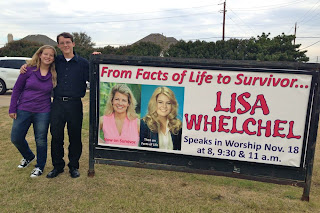