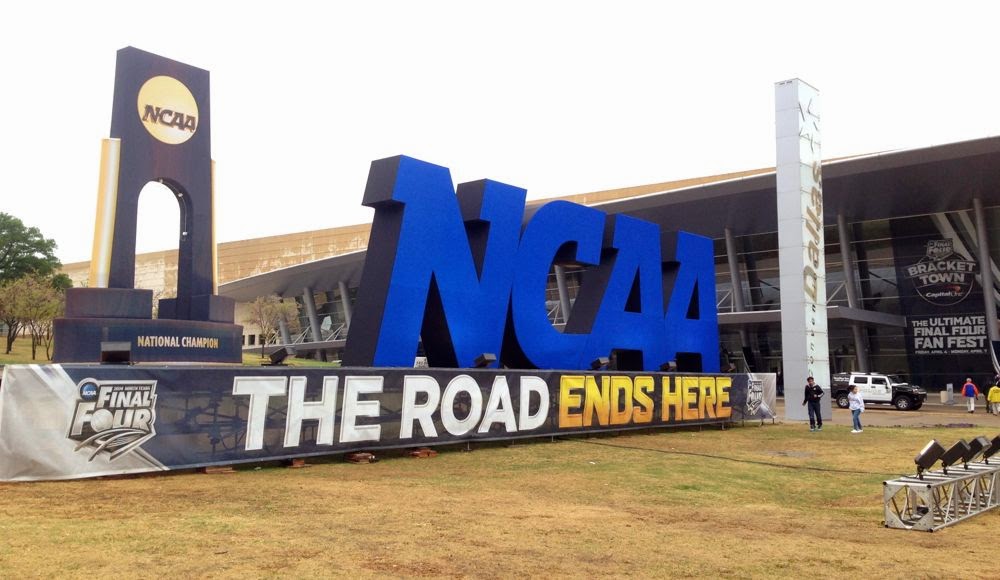 For years I’ve been an cheering bystander along the “Road to the Final Four,” filling out my brackets and rooting for those Cinderellas as March Madness gets underway. This year was extra exciting, though, because that road to college basketball’s championship ended in North Texas. 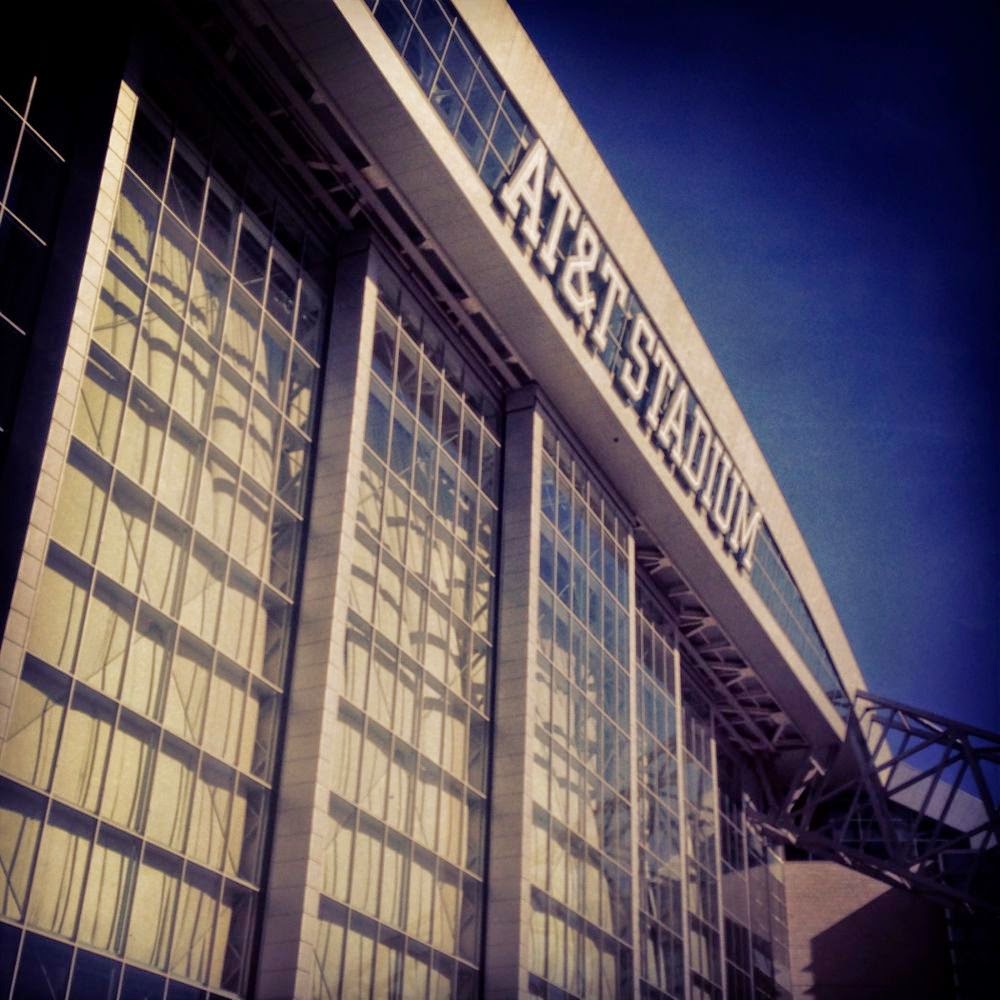 To get in on all the excitement, I signed up to volunteer at Final Four-related events. Several people have asked why I wanted to volunteer. I guess I did it just for fun. Years ago I drove a courtesy van for reporters covering the Big 12 tournament in Dallas, and that experience was a blast. How much more fun would working the Final Four be? Besides, it felt great to serve our community and offer our visitors some good ol’ Texas hospitality.

Of course, my volunteer shifts were far from the glamour of Cowboys (AT&T) Stadium where the games would be played. In fact, the closest I got to the court was during the orientation session held at Jerry World—and even then, the court was still in pieces.


It was exciting to be there, though, knowing that this would be the sports world’s epicenter in just a few weeks. Besides, it’s fun to be in that massive stadium. One of our training sessions was in the radio lounge, a meeting area just off the broadcast booths in the stadium. Pretty cool! Also cool: 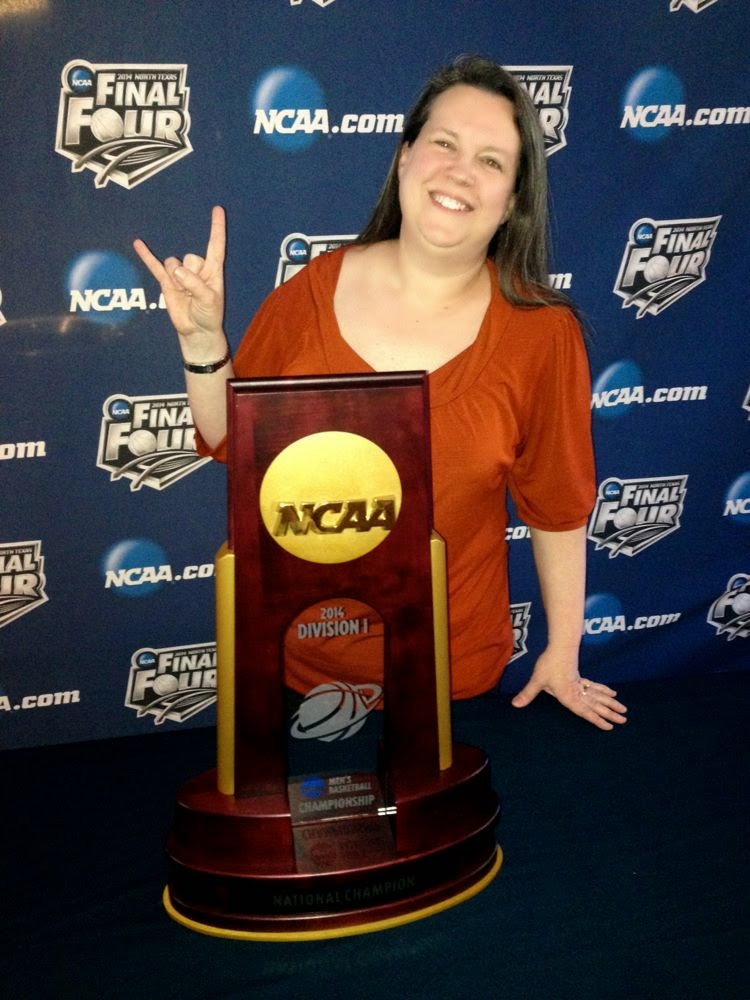 getting to pose with the tourney’s ultimate prize! 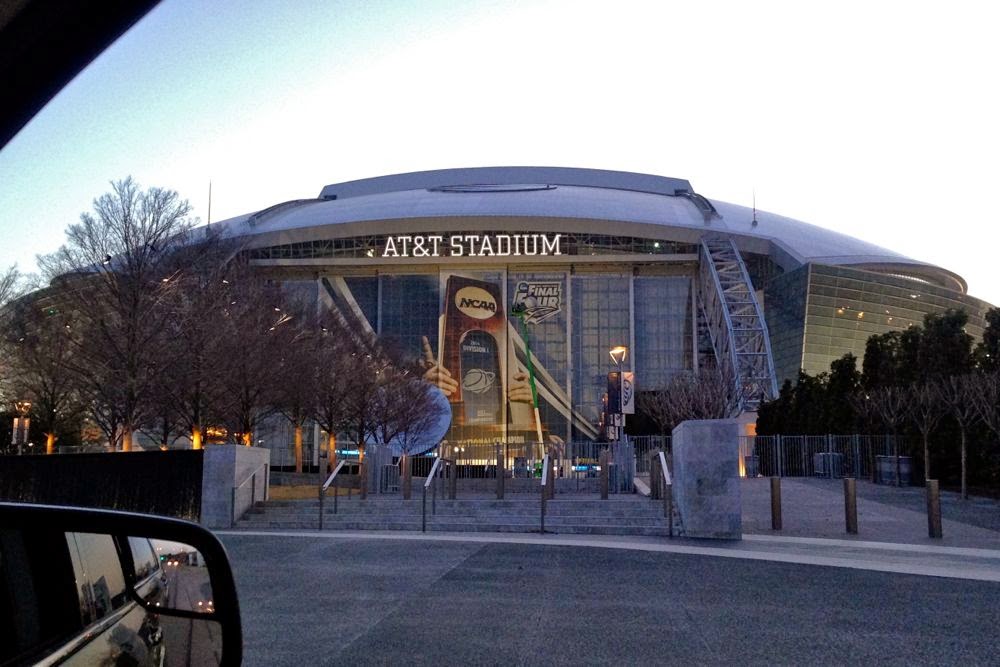 After the orientation, I was armed with information and my fancy Final Four golf shirt, jacket and hats. I couldn’t wait to get to work! Just a few weeks later, I got my chance.

For my first shift on Friday night, I went straight from school to the Dallas Convention Center downtown. After wading through rush-hour traffic, I reported for duty and got my assignment: manning the waiver station outside “Bracket Town,” the Final Four fan festival. Getting people to sign forms may not sound like fun, but it was! It was great to talk to all the fans as we collected their waivers and put wristbands on folks. Everyone was in such a good mood, and it was interesting to see all the college T-shirts and hear the different accents. Easiest fans to pick out in a crowd? Kentucky’s! Love that twang!

Bright and early Saturday morning, I was at the TCU rec center for the Coca-Cola Youth Clinic. One of three free youth basketball clinics going on across the Metroplex, this Fort Worth one featured drills led by college coaches and assisted by Horned Frog players. I began the day greeting parents and kids, and then I held court (heh heh) at one of the gym’s water stations. My partner, Curt, and I filled the official NCAA cups with water and Powerade for the thirsty little athletes. Again, way more fun than it sounds! But really, watching third through sixth graders learn defensive strategy (and flop! The coach had them practice FLOPPING!) was a blast. Big bonus: I shared a private convo with Superfrog.

Once our water station was cleared and the kids were back with their families, I headed home. There I gathered my own family and headed to Bracket Town. On Friday I’d seen enough to know that Brett and Katie would love it, and I knew I wouldn’t get to play while volunteering.

Throughout the exhibit hall were sponsors’ promotions and activities. Several of them, like AT&T, asked you to complete a certain number of tasks before collecting your premiums. We spent much of our time working on our Capital One punch cards. In the Capital One areas, it was fun to see sports other than basketball represented, from baseball to lacrosse, from hockey to golf.


After trying their hands at other sports, Brett and Katie were itching to play some roundball. 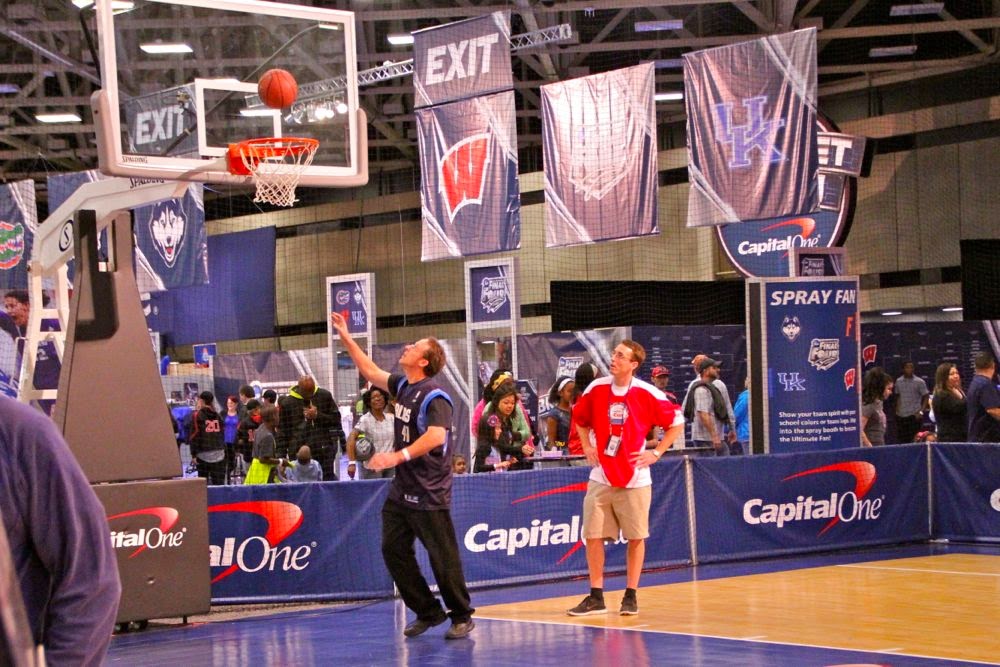 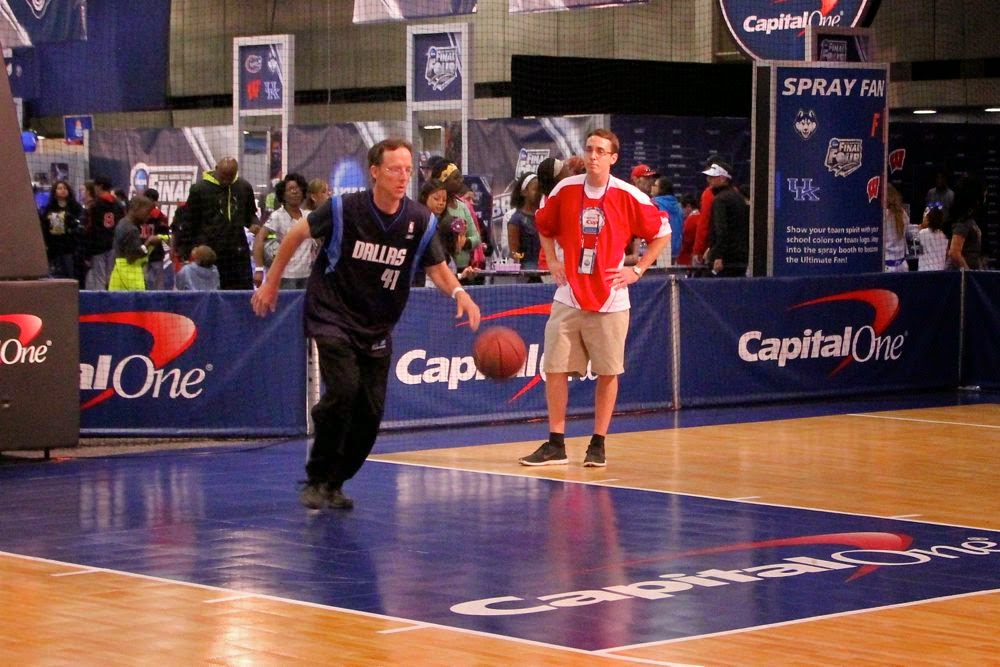 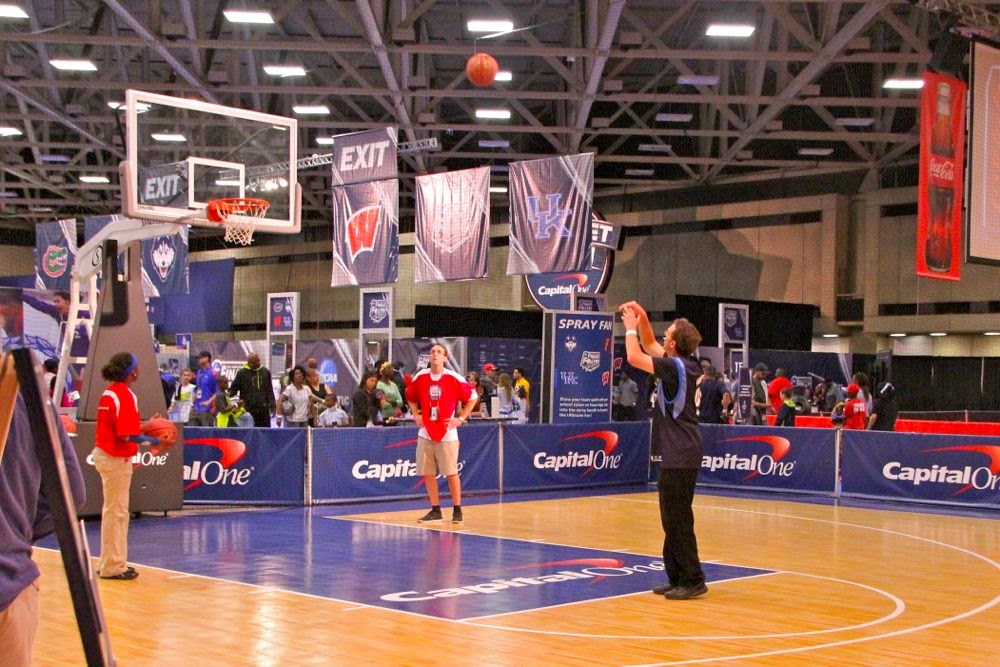 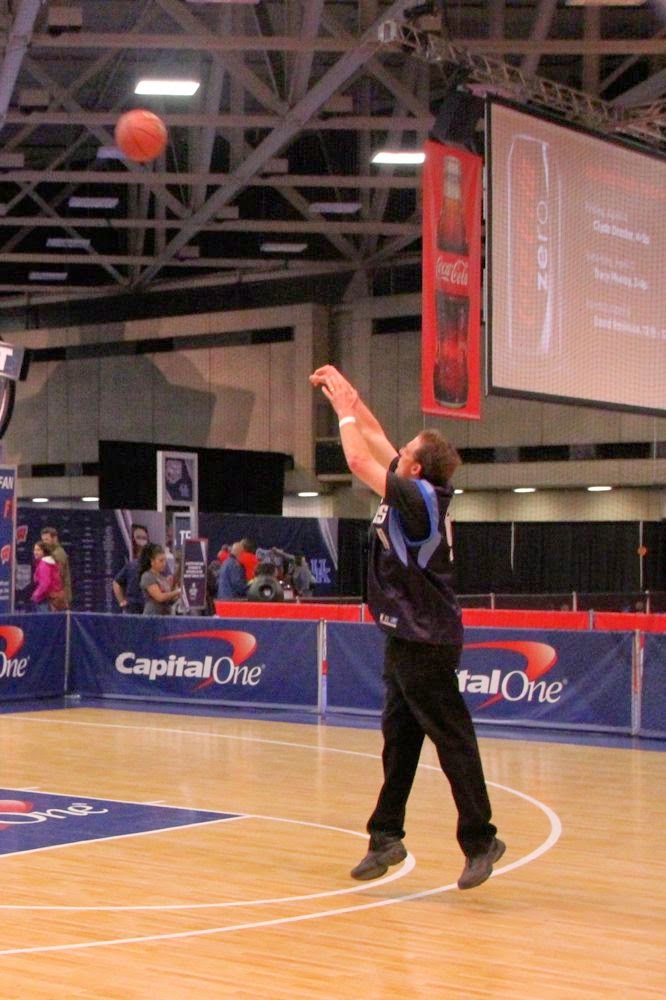 After some warmup shots, they were ready for a few games of knockout. In line I saw an old friend, our school’s basketball coach! 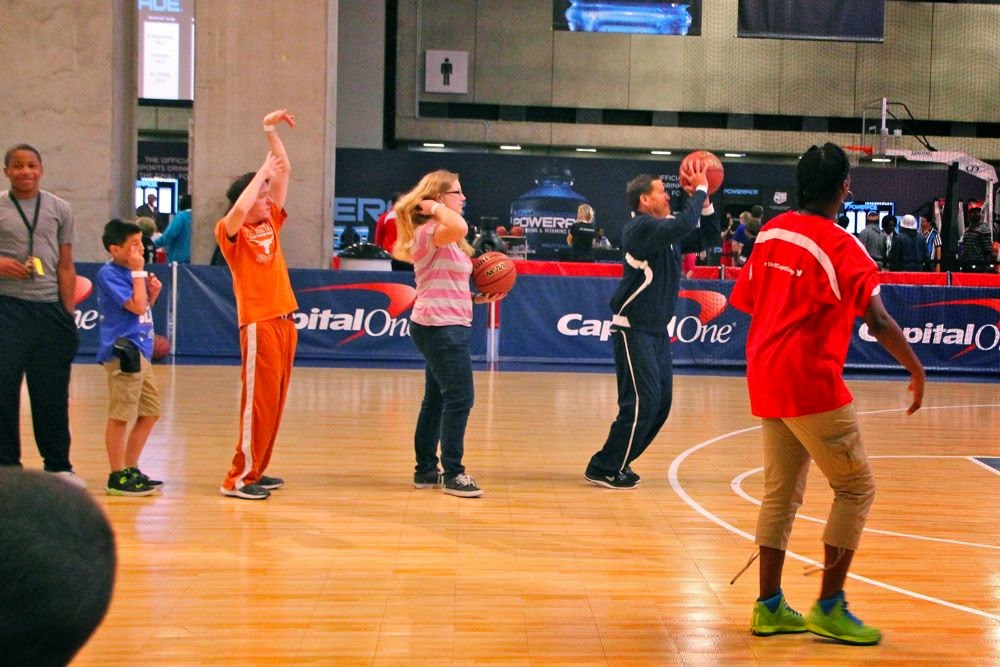 Katie’s already plenty competitive, but playing against someone we know (who also happens to be really, REALLY good) made these rounds of knockout extra fun! 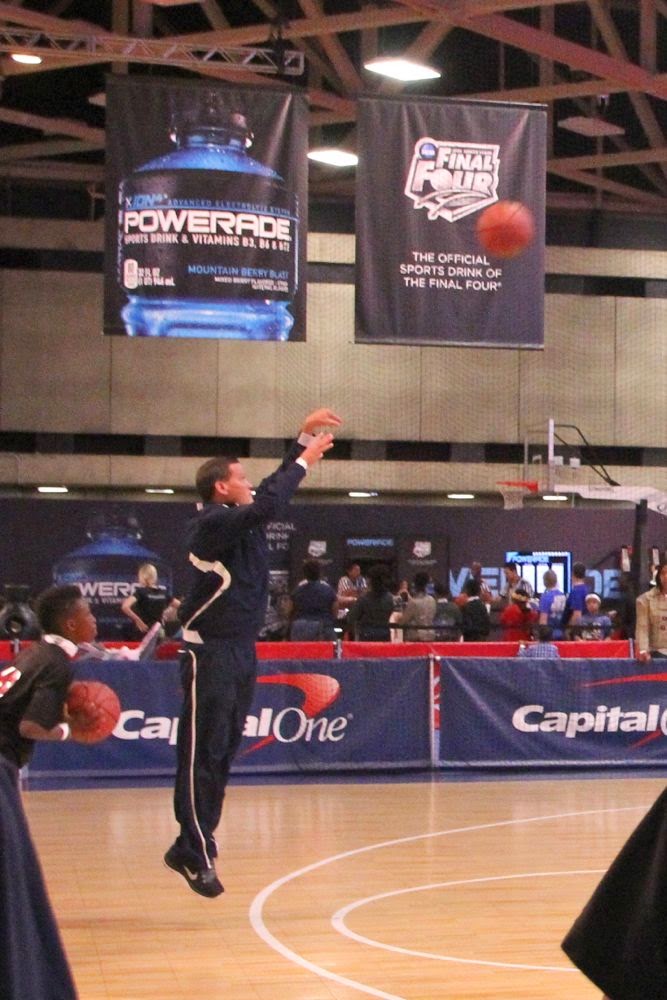 Did I mention he’s really good? 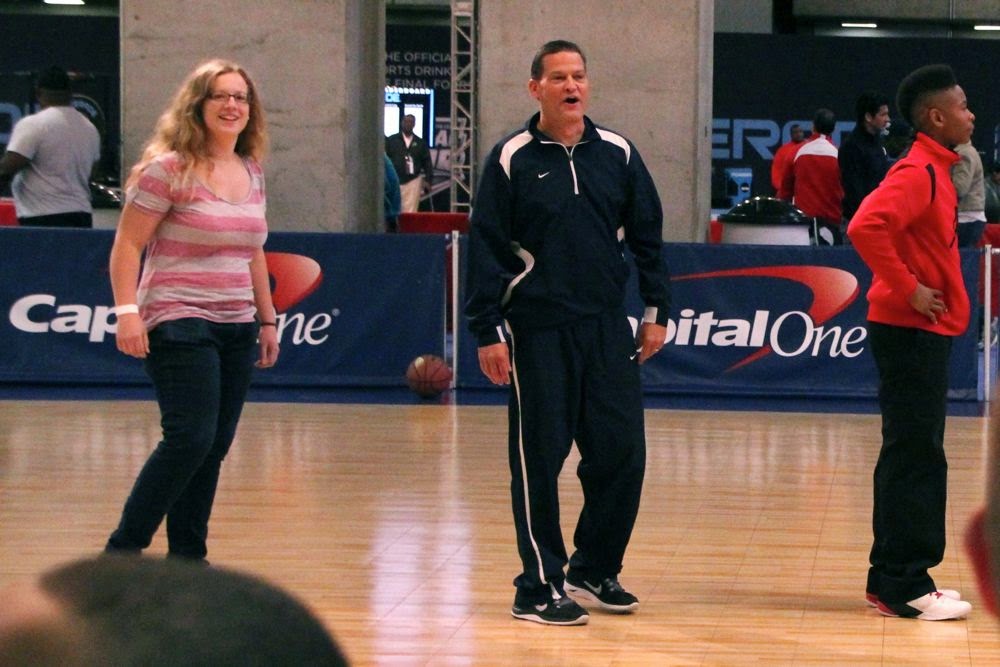 And yes, Katie knocked him out! Coach missed precious few shots, but Katie capitalized on one of his errant attempts and sent him packing—for that round, anyway. (I found out later that he entered the big knockout contest and won some cash. Can’t say I’m surprised!) 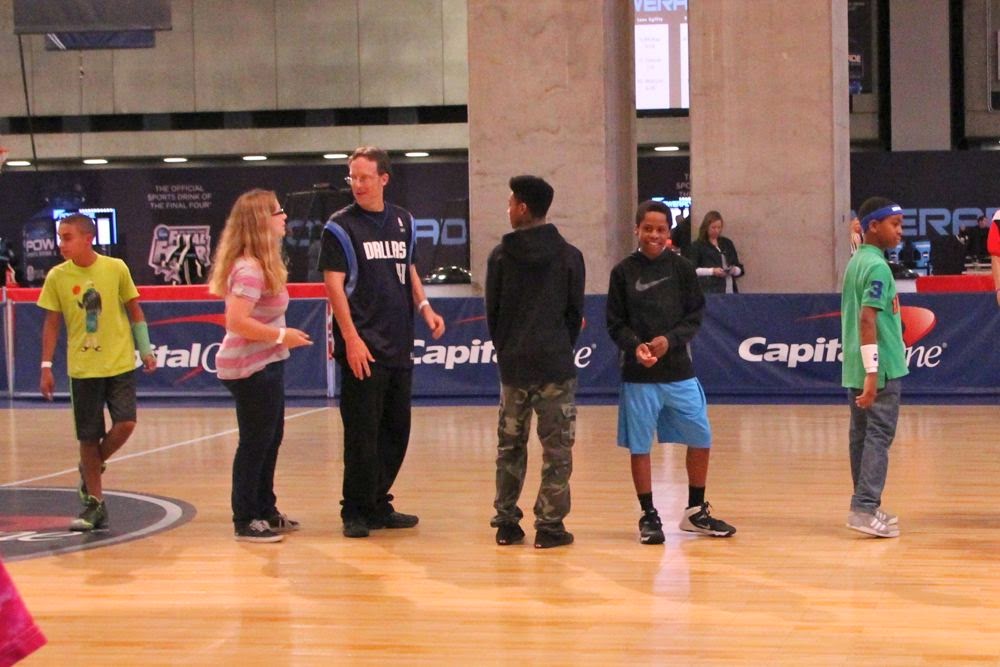 Brett got in on the action, too. I think he and Katie could’ve spent the rest of the weekend playing endless knockout rounds. 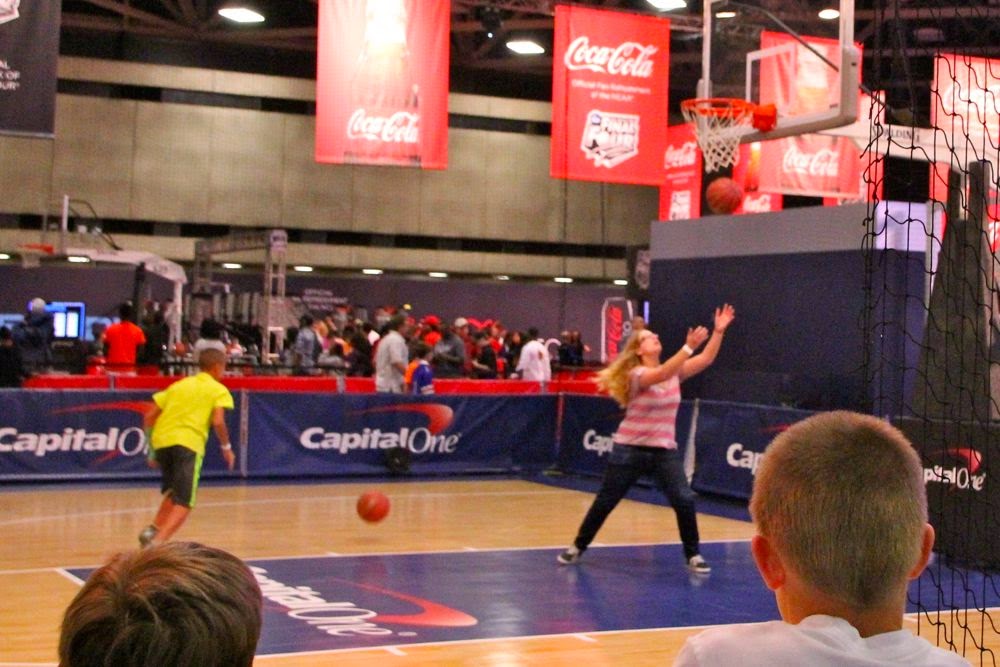 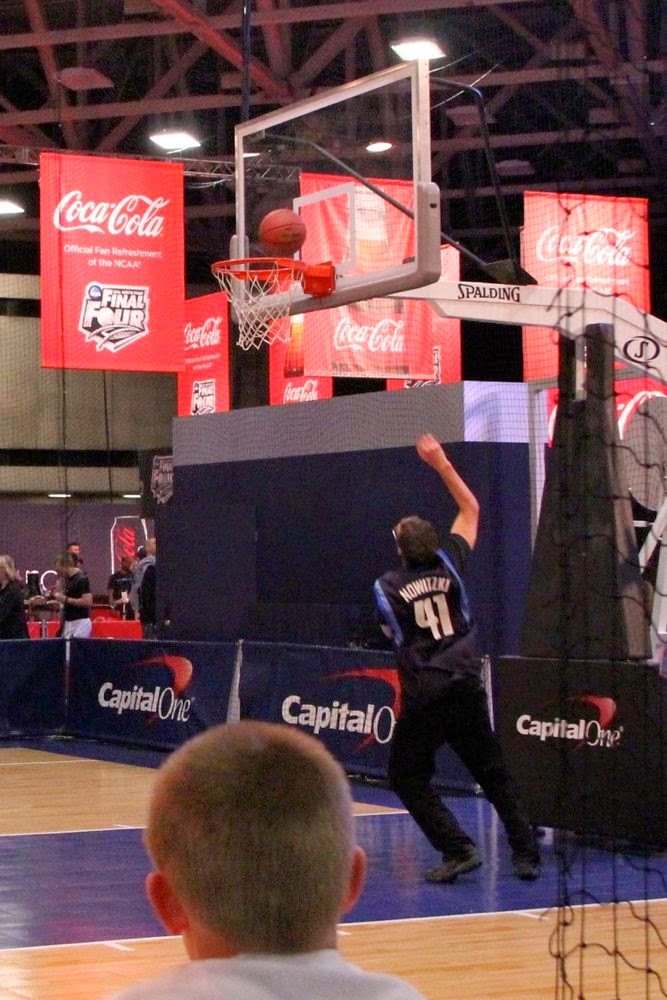 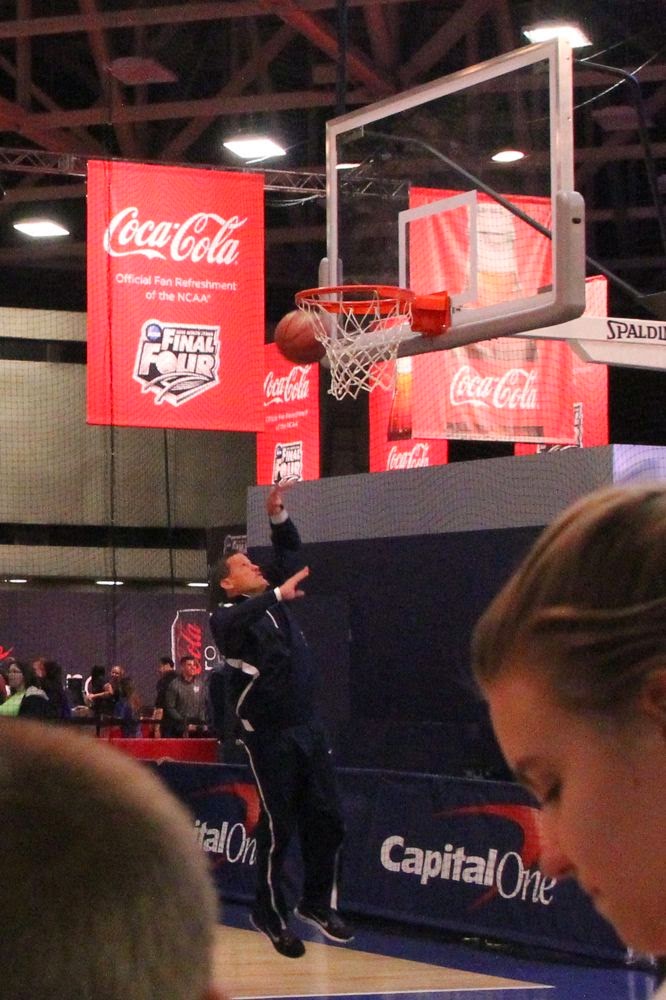 Making our visit extra special was getting to see part of the first semifinal game on the big screens scattered around the exhibit hall. While waiting for different activities, I’d check the score. It was crazy to see this big upset in the making as UConn overcame an early deficit to take down the favorite and overall top seed, Florida. 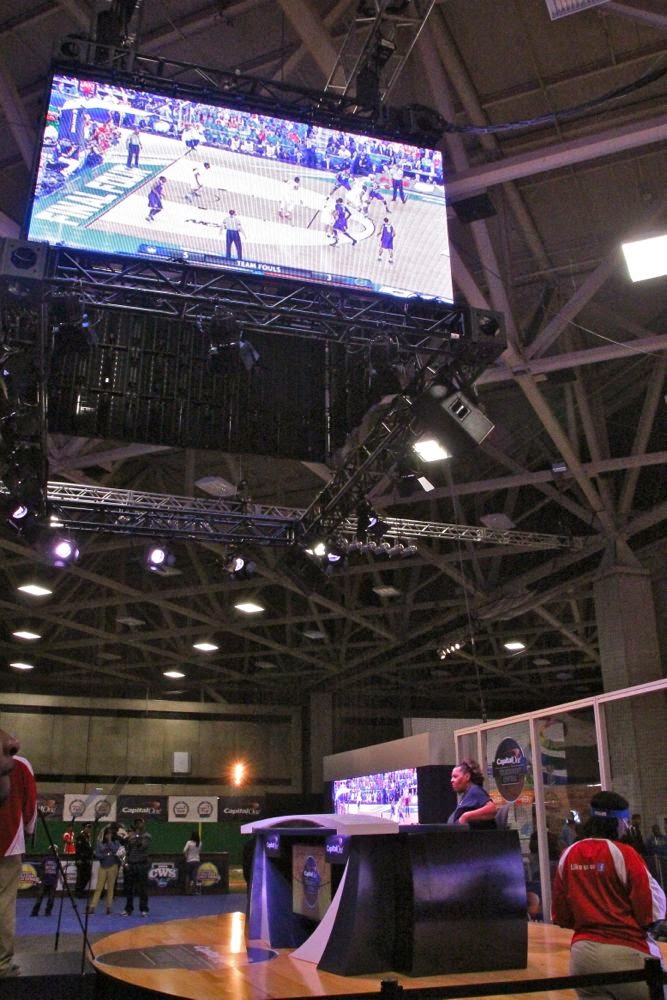 At this particular station, Katie and I had our picture taken at the “Tournament Central” desk. After we posed, we got to see our photo, complete with Clark Kellogg and Charles Barkley. Now that was a surprise! 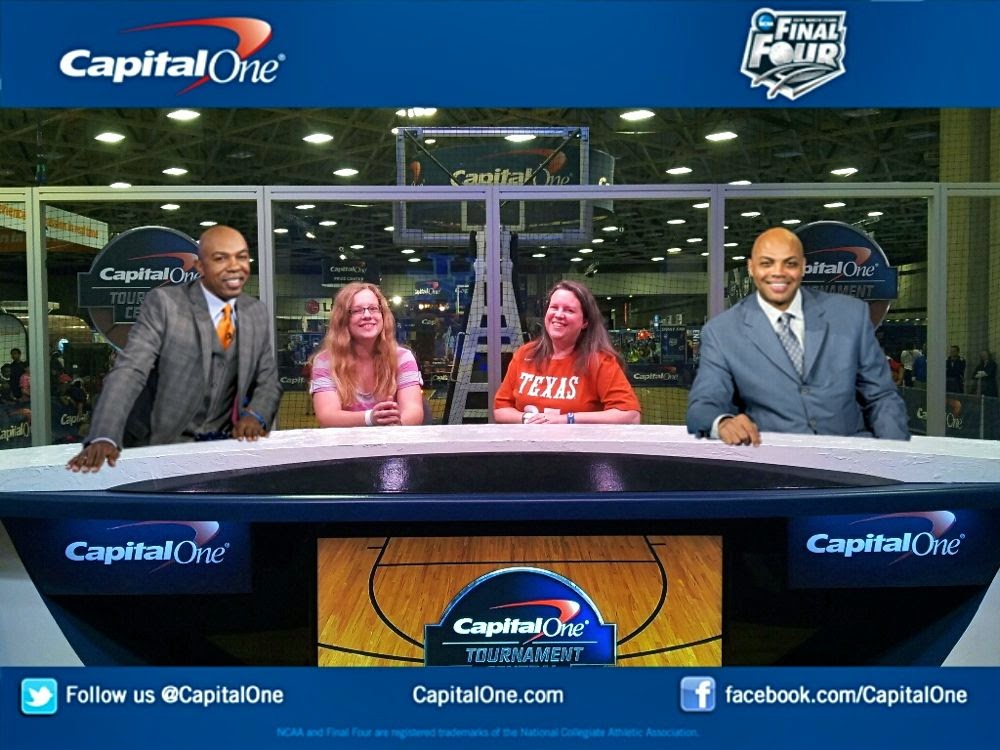 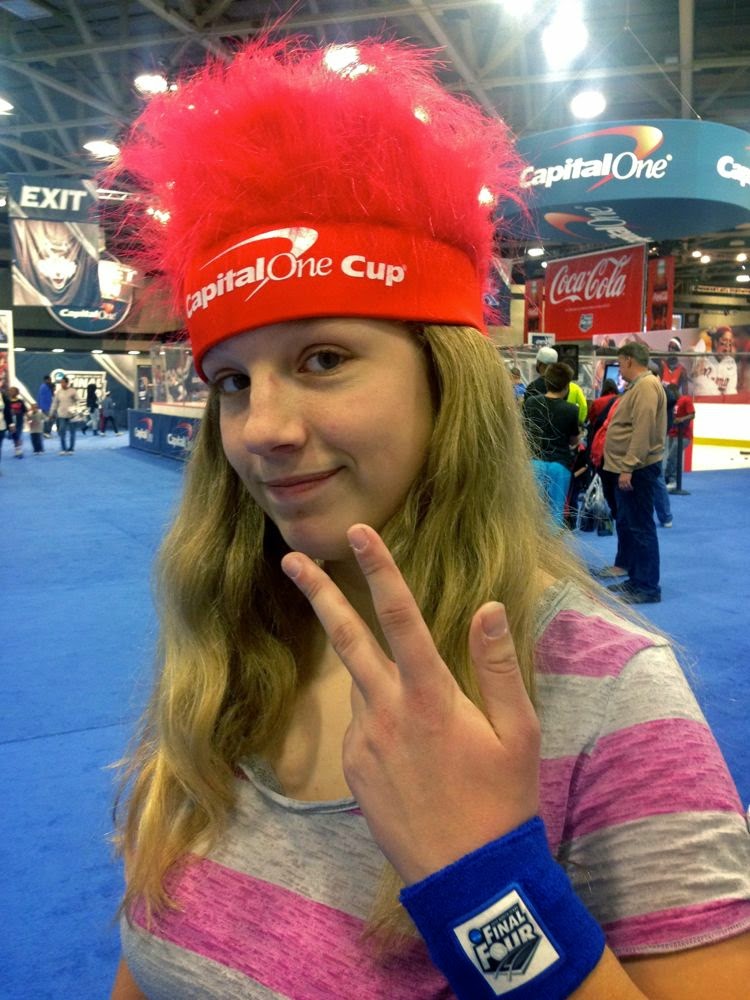 Before moving on, Katie cashed in our Capital One punch cards to collect some serious swag. Stylin’.

After that we hit up the Allstate section with its variety of shooting challenges. 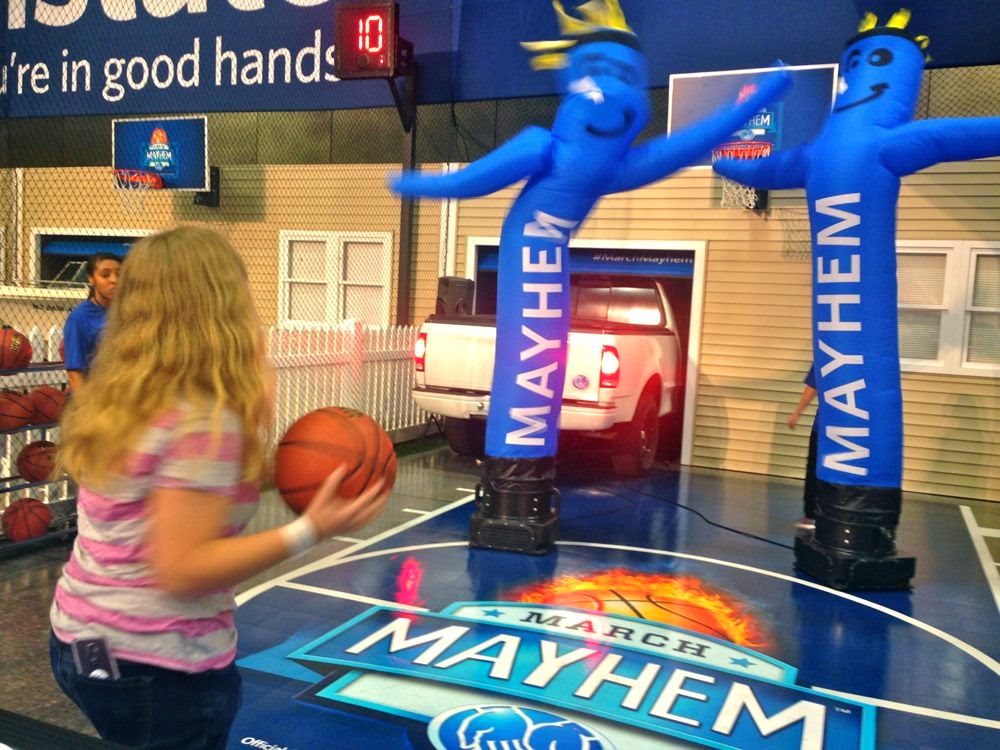 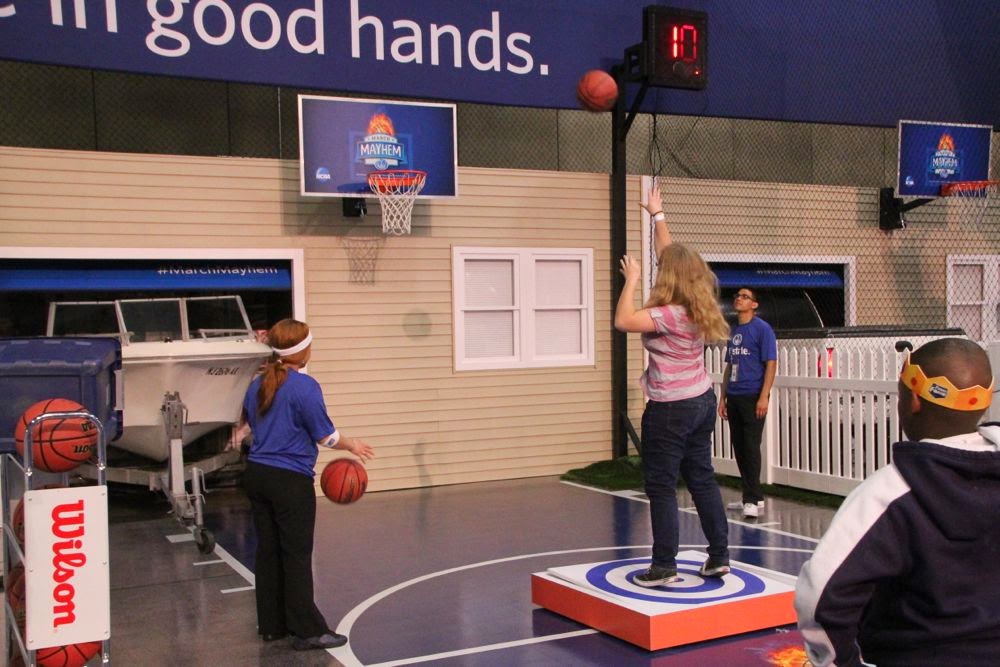 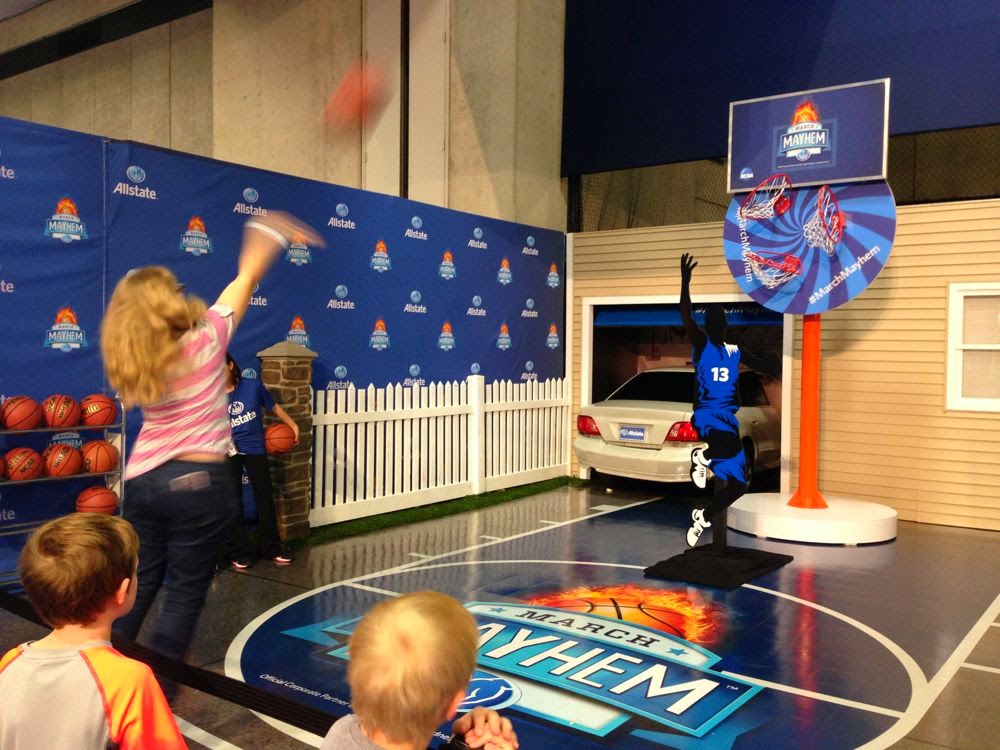 We ran out of time before we could get to every sponsor’s area, but we had a great evening. 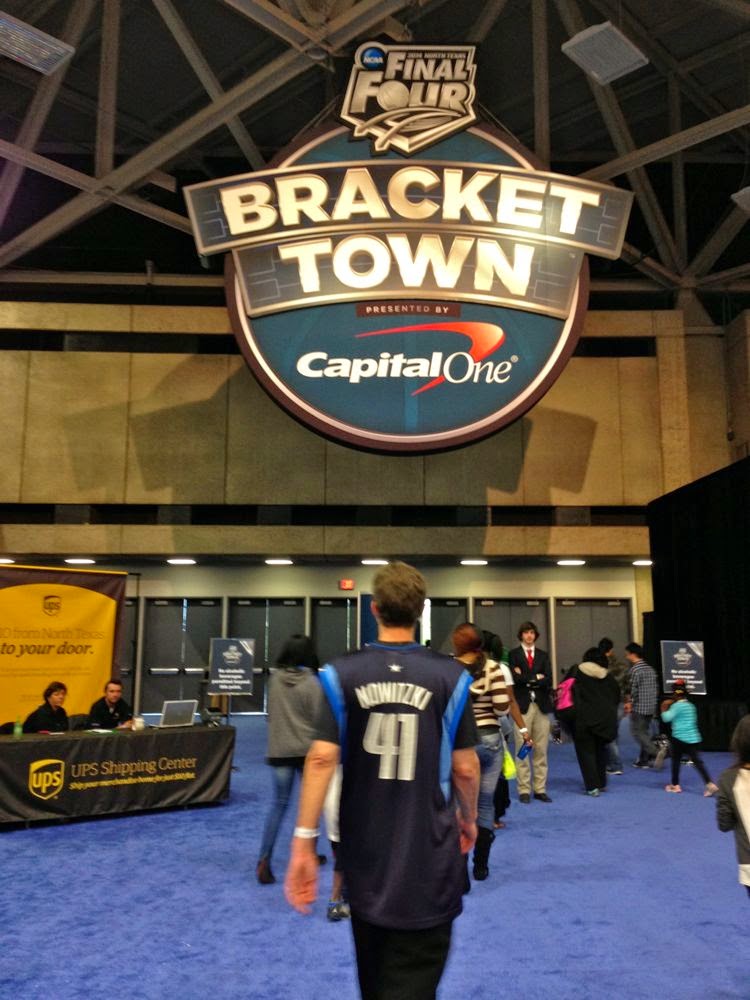 On Sunday night, I was back at Bracket Town to work my final shift. This time I was stationed at the NCAA “Spirit Court.” A couple of “coaches” were on the court to introduce a variety of shots, and randomly assembled teams would try to be the first to 10. My job was to check for waiver wristbands and help regulate the number of people on the court at once. At times we’d be overrun with kids, energetic youngsters who would come off the court and circle right back in line to get back out there. Other times we’d have super-competitive college kids who would scout their teammates, determined to find a winning combination of shooters. Again, keeping those players in line doesn’t sound like a good time, but it was! If it weren’t for my tired feet, I could’ve stayed out there all night. Alas, my dogs were barking by the time Bracket Town closed at 8, so I turned in my volunteer credentials and headed home, sad to see my Final Four glory days come to an end.

Speaking of “Glory Days,” as I left the convention center parking garage, I passed the March Madness Music Festival stage where Bruce Springsteen was performing. Now THAT’S the way to end a shift: being serenaded by “The Boss” himself.

So here’s to Big D and the rest of North Texas for a great job hosting the Final Four. I can’t wait for our next chance to host. I’ll be one of the first to volunteer! 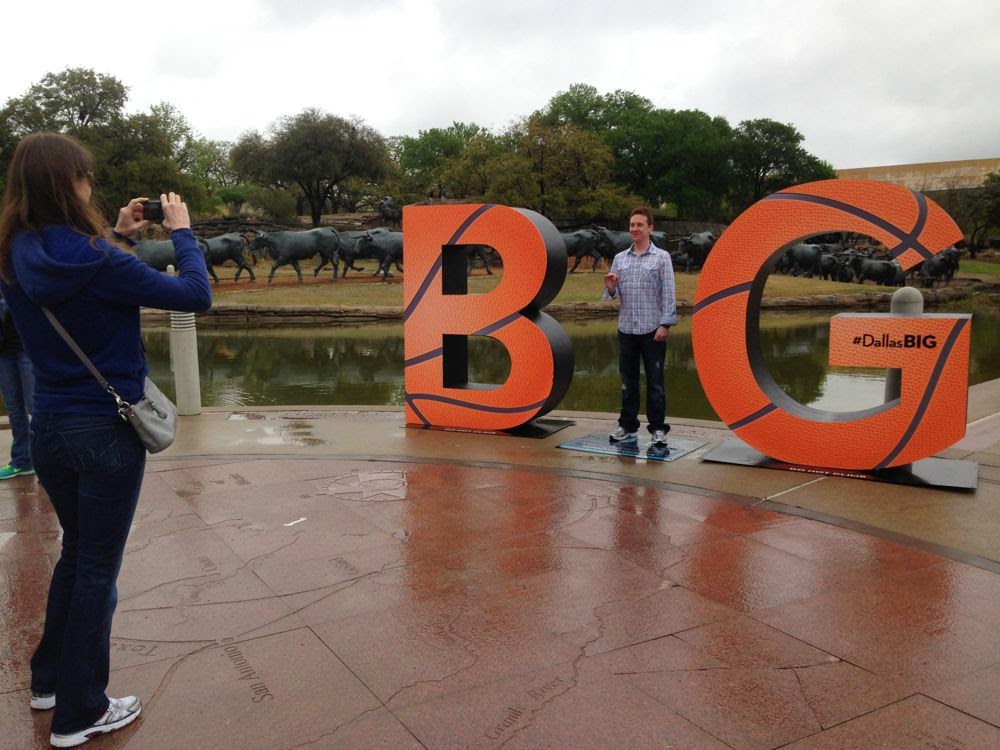 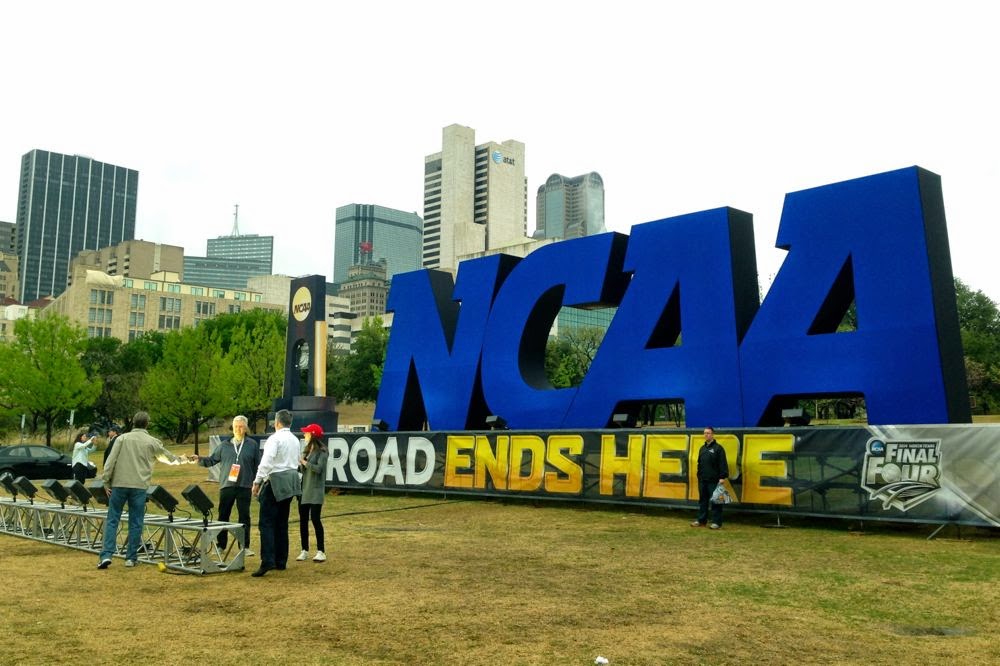