In which we catch up on some running storylines.

My mom
A week and a half after fracturing her shoulder, my mom is adapting as well as she can to being one-armed. She still can't drive, but she's learning how to use her left hand more and more. Her pain is managed as well as can be expected thanks to her newest prescription, and she's been spacing the doses out more and more as the pain will allow. More angels have come into our lives, bringing food and providing rides. The next big event comes tomorrow when she sees the orthopedic specialist. Please pray that she's progressing nicely and that tomorrow's appointment won't be a downer! She's ready to know the countdown's begun on her recovery.

Ryan
He had his annual check-up at the H/O clinic yesterday, and as expected, he's doing very well. We did blood draws immediately before his factor infusion and then again one hour and six hours later. Once we have those results, we may be able to reduce his factor dose, which is still super-high because of his inhibitor. His doctor is encouraged that Ryan's so healthy and active, as are we! Praise God!

Katie
Our 9-year-old just made the Battle of the Books team at school! She's so excited about this opportunity, and her teacher is especially tickled that their school's team now has this secret weapon on its side.

The book proposal
Brett's book proposal was met with unanimous approval, and he signed a contract shortly after submitting it. The manuscript, due in February, will eventually be published as a nonfiction reference book covering a subject dear to Brett's heart. It's a perfect fit for him, and he's been spending most of his "spare time" working toward its completion.

The chitties
Our feline friends have become quite the mousers. Yesterday I found KitKat playing with a deceased rodent, and this morning, Brett and the kids very nearly stepped on another dead mouse, or should I say, two halves of a dead mouse. Nice.

The football season
The Texas-Baylor game was my NINTH Texas football game in a row to attend, dating back to the Big 12 championship game last December. I don't know how I'll manage to settle for watching the Horns on TV this Saturday, but I can't quite make it all the way to Lincoln, Nebraska! The Baylor game turned out OK, but good grief, that first quarter was miserable! The Bears have come a long way, and apparently, the Horns still have a long way to go.

But tailgating? We've got that down! Who needs hot dogs and burgers when you can have ginormous ribeyes before the game? 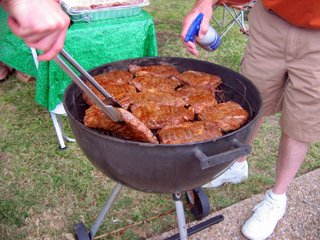 Wow! What a lot is going on in your life! I hope your mom does okay. That has to be so hard. Yeah Ryan!! He has done so well, and he is such a trooper about it all. Way to go Katie! Wow, a published author. How exciting! I have a feeling that his reference book covers a subject that I might not have a lot of interest in ;) Dead mice around the house, no comment on that one! I can't believe that you are not driving to Nebraska for the game, what kind of fan are you anyway? (Just kidding).