On April 1, 1993, my Daddy died. And yes, he has always been and will always be "Daddy." My mom has been Mommy, Mama, Mother and Mom to me, but Daddy? Always Daddy! 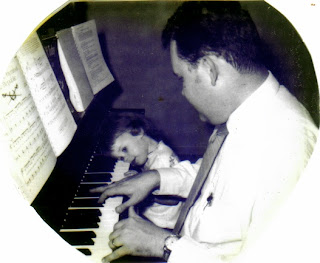 Playing piano for "Daddy's little girl." This picture now sits on top of our piano--the same one in this shot.

Music was always a big part of his life, from his piano playing to his barbershop singing to his song leading. He was the best song leader in Tyler, and every year, at the citywide year-end singing, he was the one with the guts to take on the more challenging "O Lord, Our Lord" or "The New Song." 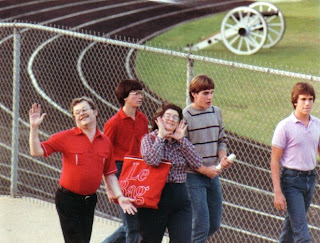 Heading into our high school football stadium on a fall Friday night (circa 1985). The ultimate band parents, they never missed a game, contest or concert. And yes, they were a goofy couple!!!

Of course, his only child was pretty important to him, too. He and my mom were always there to support me in the sundry activities I jumped into, from Girl Scouts to Camp Fire Girls, from newspaper to band. 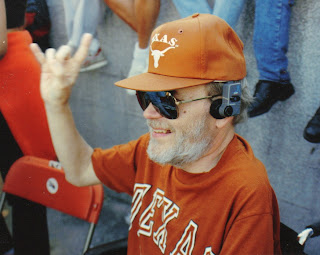 Cheering on the Horns from the handicapped section in the Cotton Bowl. It was harder to go to the State Fair in a wheelchair, but he couldn't stand the idea of missing the Texas-OU game! This remains my all-time favorite picture of Daddy.

I inherited plenty from my father, from my curly hair to my politics. And there's no doubt in my mind that my orange blood was inherited, too! He and my mom were Longhorn fans way back in the Darrell Royal days, and bless their hearts, they managed to move to Austin just in time for me to be born there. My parents never pushed me to go to Texas, but they did instill in me a healthy respect for THE University. 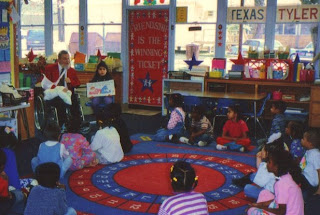 Reading to my mom's kindergarten class. He died a few weeks after this picture was taken.

Daddy was the kind of person who was also helping others, always looking for people who needed him. He was active at church, and at different times in his life he was a preacher, youth minister, deacon and elder. He also volunteered with several civic organizations, quick to answer the PTA's call or step in when the booster club needed a boost. Although he had his own business, he tirelessly supported my mom's teaching career and all of the extra projects she had going in her kindergarten classroom.

That by itself would make a great eulogy for any man, but when you put it against the backdrop of his health, it's even more amazing. He had hemophilia, which led to a host of other health issues. When he was born in 1942, kids with hemophilia were considered doomed. There wasn't too much concern for their futures because frankly, they weren't expected to have futures. He beat the odds to graduate from high school and college, get married, have a kid and live a productive life for 50 years. But the frequent bleeds and the lack of effective clotting products (like what we have now) caused severe joint damage. It seemed like every other week he'd be on crutches because of a sore knee or ankle. Most people see the bar across the top of their sliding glass door as just a curtain rod. In our house, it was also the place to hang the IV bag when he'd need an infusion. And the pain! He was in near-constant pain from years of spontaneous internal bleeding thanks to his hemophilia.

A few weeks after I graduated from UT, Daddy was barbecuing some chicken when he fell in the backyard and broke his hip. The surgery to repair his hip nearly killed him, but he survived. His kidneys, however, did not. Along with starting dialysis that year, he was also in a wheelchair pretty much from that point on. Between May of 1990 when he fell and April 1993 when he died, he put up with tons of complications, including glaucoma and other diabetes-related issues. (We compared him to Job but laughed that we shouldn't take that analogy too far or my mom and I would have to die!) Still, his concern was always for others. I'll never forget how excited he was to find out that the phone company would dial numbers for the vision-impaired. All you had to do was tell the operator who you needed to call and they'd do it, no charge. Why was that such good news? Because he could resume calling the sick people at our church! 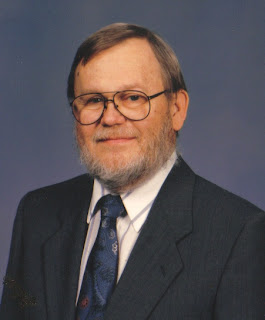 I could write pages about Daddy's sense of humor and how he teased me relentlessly (e.g., you would THINK that I ran into gas pumps regularly from the way he described the ONE TIME I grazed one pump's curb!). And then there's his relationship with my mom, a shining example of marriage if there ever was one. (As I was looking for pictures to scan today, Ryan saw a portrait of Mama and Daddy. He was struck by how unusual it is to see his Memaw as part of a couple! That pretty much did me in.) I should write about how Daddy insisted that they drive to the Metroplex to meet Brett, my new boyfriend, in late March of '93. How were we to know that Brett would be driving to Tyler for Daddy's funeral a week later?

There's so, so much more I could say about Daddy, about how deeply he was missed at our wedding, about how desperately I wish he could've held my babies in his arms. Those posts will have to wait, though. It's getting late, I'm already beyond maudlin, and I have 15 years' worth of stories, of events big and small that he's missed. And oh, how I've missed him!

I am so very sorry. What a wonderful, loving tribute to your Daddy. How blessed you are that you had such a loving and wonderful relationship with him. I am sorry that he is not here to see how wonderful your children are and to see how well R does.

That was a great tribute to what seems like a terrific man! I am glad you have such fond memories of him. Thanks for sharing them with us!

Thanks for sharing something so close to your heart. It is amazing he did so much in while goig through his own problems. What a special dad. Kb and I feel the same way about his dad who passed away in Sept.'92. How we wish we would have married before he passed, and wish the kids could have been with him. Last time we were camping Ryan said,"I wish Grandpa Curtis was here." It brought tears to my eyes, just as your blog has. Your very sweet, See Dub!

Your Daddy clearing was an amazing man. Both he and your Mom passed along such wonderful values and traits to you - as shown by your constant way of giving to others and your sweet, caring spirit. As you (and many others) were blessed by your Dad's presence and thoughtfulness, we are blessed by yours. Your tribute to your Dad brought tears to my eyes...thank you so much for sharing your stories with us!

I'm sad to see such a great man in the Hemophilia community pass, but I am relieved that he left such a great imprint on the world. Thank you for the post.

what a sweet memoir of your dad! Thank you for sharing with us. Big hugs today!