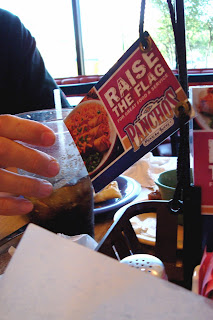 Brett got to pick our Family Fun Night dinner destination. His choice? Pancho's! (I think the coupon Katie got with her report card might've influenced him slightly—that and the fact that he hadn't eaten there in years!) 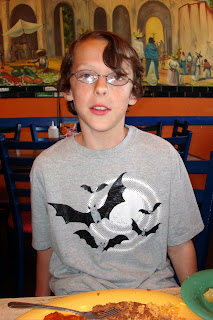 Ryan seems to have turned the corner on the sickness that keeps wearing him down. 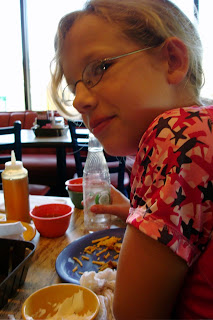 Katie downed her Mexican soda and was a big fan of the sopapillas. 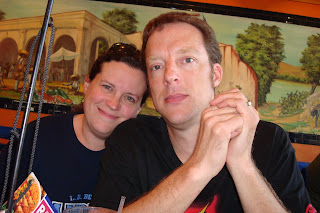 And Brett and I reminisced about the last time we both ate in this building: Jan. 20, 1993!
How do I remember that date? Here's the story. We were part of the renowned Midtown singles, the huge group that spawned countless marriages in the mid-'90s. Our first date was on Monday, Jan. 18, 1993, and two days later, we went to Wednesday night church. Afterwards, the gang headed to Shoney's, and Brett gave me a ride. That was kind of our debut as a couple. Shoney's closed years ago, but Pancho's opened up in that same building. So tonight, when we were looking for a table, I naturally gravitated toward the corner of the building where we shared one of our first meals together!

Back at home we watched the Mavs get off to a smokin'-hot start, and at halftime, we were ready to shoot some hoops ourselves. Tonight our two-on-two game was boys against the girls. 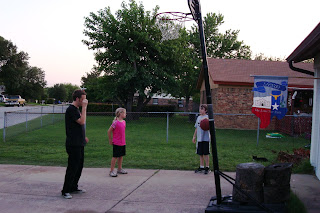 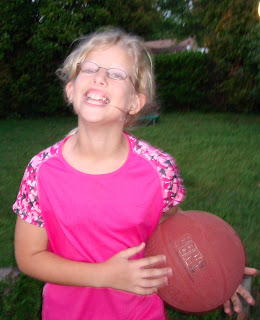 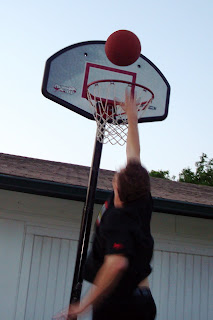 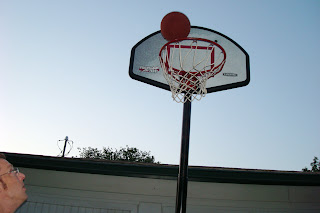 Both kids and Brett are real sharpshooters, and they hit some unbelievable baskets. "Hoops" McCoy (as they call me) had a move or two on D. Tons of fun!

To top it all off, the Mavs won! Lovin' this Friday night!
Posted by See-Dub at 8:59 PM

In case you don't see my other comment, I would like to reiterate that in honor of your trip to Pancho's AND your being okay while the lockdown situation was happening, the Stars won their game in OT tonight! :-)

Oh - and also a comment on the Mavs. Didn't they look like a different team tonight? It was great to see them NOT shut out completely. Still crossing my fingers for success for them. Continuing my tradition of no facebook and working on a pile of laundry during these games!

Sounds like the perfect Friday night to me - family fun and Mexican food!

I really want tp get a basketball goal like y'alls! I think we would have fun with it!

My last memory of a Panchos involved a black creature - I really am in no hurry to return :)

I'm so glad you have a good memory of Pancho's. The last time we ate there I lost 7 pounds by the morning after. NO JOKE! Hey doesn't the weight loss game start Sunday? Maybe next week I need to revisit the place. Hmmm?

What a sweet story you told.

I think I cut my teeth at Panchos. Seriously, as a kid every time my grandparents came to town we went there. It was a huge deal. My sister and I both would always order 4 scoops of rice and one taco. Then we'd fight over who got to raise the flag. Good times!