Since we were in the neighborhood...

We used our Six Flags season parking pass for the Rangers game, and since we were right there, we figured, why not go on in? Brett doesn't make it out to the "Big, Big Park" all that often, so he figured this visit could count as his 2009 outing.

For some reason, he no longer cares for the fast rides or the dizzying heights that thrilled him in his younger days. We were really hot after the game, though, so we managed to get him on the Aquaman right away. 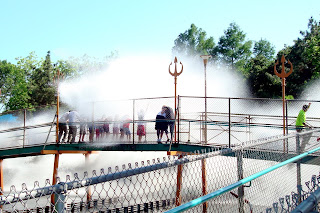 Well, he rode on the boat. He and I didn't wait on the bridge for the big splash. 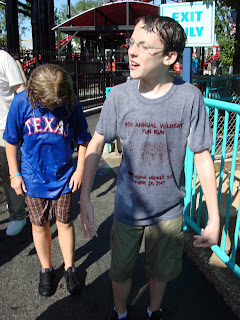 But Ryan and Katie did!
For me and the kids, it was kinda funny to be spending our second Sunday afternoon in a row at Six Flags! We hadn't been out there in months, but then there we were, living it up for back-to-back weekends. 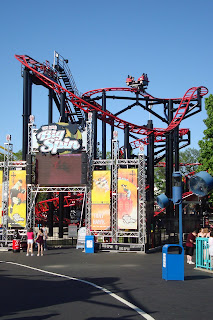 Much like last Sunday afternoon, the lines were pretty short. The kids and I rode some of the rides that we're usually not patient enough to wait for, like Tony Hawk and Mr. Freeze. 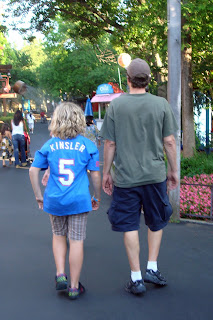 Brett was sweet to wait for us to ride whatever we wanted, even when he really didn't want to join us! I think he ended up riding three rides all day—and that third one was because the Boot Scootin' ride operator begged us to ride since we were just sitting there, waiting for the kids to come off the Texas Giant. 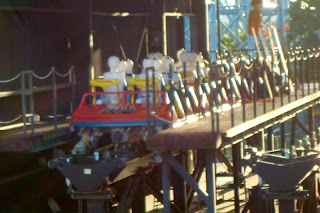 That really has nothing to do with anything, but I had never noticed them before! (Again with the Titan obsession. But it IS the best ride EVER!!!!!!!!! Ahem. Lost control for a second there. Sorry.)

Katie took advantage of the shorter-than-usual lines to wait for the very front seat: 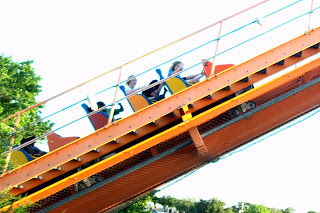 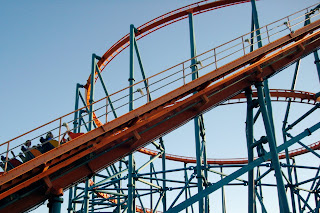 It was so strange to be walking INTO Six Flags already exhausted after the baseball game! Note to self: Rangers game plus Six Flags equals TOO MUCH for this 41-year-old body. But wow was this crazy/fun day just what my work-weary spirit needed!
Posted by See-Dub at 11:52 PM