Tradition fit for a king (cake).

It started so innocently years ago, but now, it seems like we "have" to have a king cake for Mardi Gras. As Fat Tuesday approached, I mentioned that we should pick one up. Since I was still killing myself trying to finish grading research papers, Brett said he could run by Albertson's to get one. (Over the years we have determined that Albertson's makes a better king cake than Tom Thumb.)

When I left work at 5:30, I called to make sure the pastry had been procured, mostly to make sure I didn't need to hit Tom Thumb on my way home from school to get a backup. Brett said he hadn't been to the store yet but would go later. Ruh-roh. Even 550 miles from New Orleans, it's next to impossible to find a king cake at 5:30 p.m. the night of Mardi Gras.

And that's how we ended up making our own king cake! The only hitch: I could find only the green and gold sugar, and the food coloring I was just certain would be in our cabinet was NOT. What to do without the purple sugar? If we only had green and gold on our king cake, we might as well throw a Baylor Bear on the thing and move to Waco! 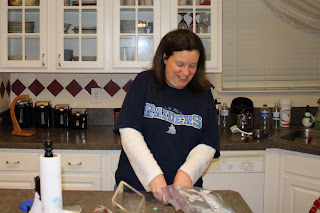 After searching the pantry for something—anything!—I finally found something we could use to get the third Mardi Gras color on our king cake. 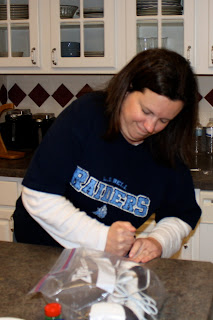 Froot Loops! We had a couple of individual serving boxes left over from one of Katie's projects, so we rounded up all the purple O's and mashed them all up. 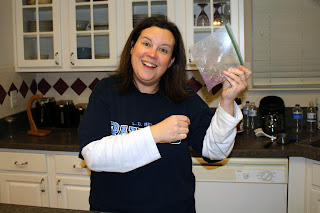 So here's our mess of a king cake: 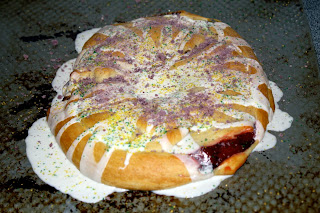 All the icing melted down into the center, and the fruit filling oozed out the side. Not pretty but pretty yummy! 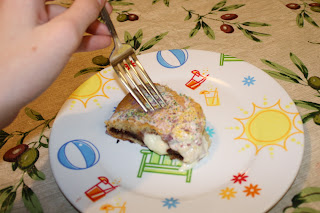 The kids opted out of the strawberry filling, so I made half of the cake without fruit. 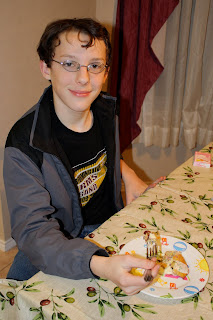 Another problem: Since the cake was homemade this time around, we didn't have a plastic baby to hide in it! Even though I've never been very good at hiding the baby, the kids insisted I hide something in the cake, so I put a piece of valentine's chocolate in there. 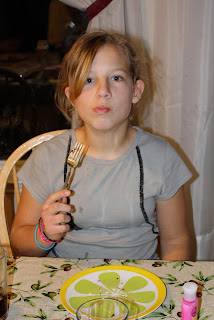 Katie found it! Technically that means she's supposed to buy the king cake for next year's Mardi Gras celebration. 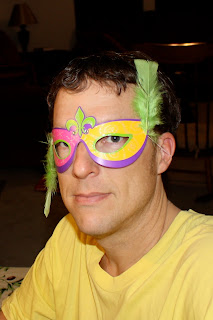