The way to spell SUCCESS.


After months of studying, Katie was READY. Thanks to the Post-Its all around the house and the well-worn word packet that Katie carried to school and church and the park and restaurants and even Six Flags(!), she knew her stuff.

And at the district spelling bee, she showed it.

I'm certain that when it comes to stress levels, spelling bees are waaaaaay up there at the top of the list, somewhere around skydiving and root canals.

Now that we're retired from the spelling bee circuit, I can safely say that these things are PURE EVIL. I mean, in what other situation do you watch children and actually HOPE they mess up? If my daughter's going to win, I have to root against other kids, and that's just mean.

And then, half the time the eliminated kids end up crying and have to be consoled, and yet I'm thinking, "One more down!" Evil, I tell you.

Katie handled the pressure remarkably, but she had a couple of close calls on her way to the second place trophy. One time was when she got the word "colloquial." When she paused, I swear our whole row stopped breathing. Another time was for the word "erudite." The pronouncer said "air-oo-dite," and Katie misspelled the word. Brett protested that there is an alternate pronunciation, "air-you-dite," the judges agreed, and Katie got another chance. WHEW.

The word she ended up missing? DOCENT. (We have decided that is the new curse word in the Dub house.)

When she missed that word, we were OK with it because we thought she was the runner-up. Then we found out that Katie would have to be in a spell-off since another contestant also missed a word in that same round (the 19th). Aaaaarrrrgggghhh! More evil thoughts! In the end, Katie spelled "limbo" and "zaniness" (appropriate, right?) while her competition missed "nuance," so that big ol' second place trophy was all hers. 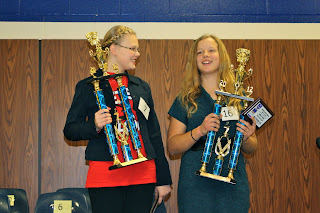 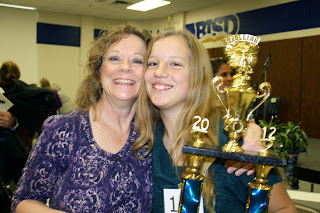 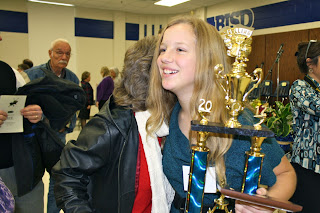 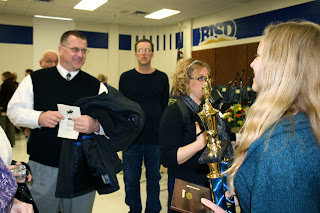 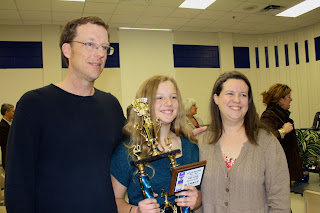 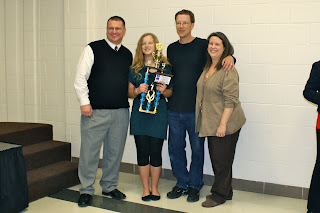 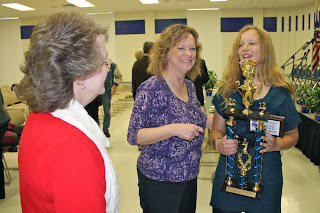 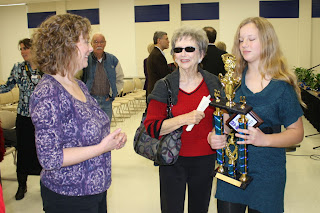 Of course, her finish led to an onslaught of hugs and congratulatory texts and Facebook posts. We were so thankful that all of her hard work had paid off, and we were glad we could be there for her stressful but successful day!
Posted by See-Dub at 1:13 PM