Between Amarillo and Santa Fe, we pulled off I-40 for a taste of Route 66 in Tucumcari, where the fine folks there have put up this salute to the old Mother Road.

Once in Santa Fe, we came up against our first real vacation foe: a headache! I don't know if it was the stress of traveling or the altitude (Santa Fe is at 7,000 feet), but I felt like my skull was caving in! Combine that with our late lunch and I was primed for a meltdown. Fortunately, as we drove around Museum Hill, Katie spotted a picnic table and we were able to eat. That and a little time out of the car helped immensely.

Our first stop was the Museum of International Folk Art. We first spent time checking out the shadow puppets in the Wayand Kulit of Indonesia exhibition. After seeing the intricate puppets and props, Katie and I were able to make our own, and all four of us were able to act out our own stories, complete with music produced on authentic Indonesian instruments. Fun! The most impressive part of the museum, though, has to be the Girard Wing, which houses more than 100,000 toys and folk art examples from 100 countries, all displayed in specific scenes and dioramas. Cool stuff.

From Museum Hill we were off to explore the Plaza area. 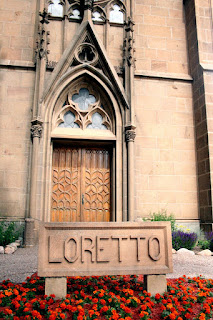 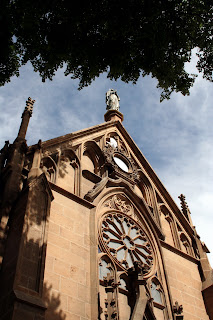 The Loretto Chapel was our first stop. They say this was the first Gothic-style church built west of the Mississippi. The miraculous staircase, though, is the real draw. There's an interesting story behind it. 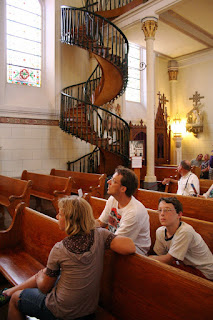 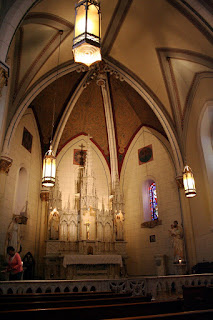 The staircase now has a couple of supports to help keep it upright, but originally, it had no central support. It didn't even have handrails. 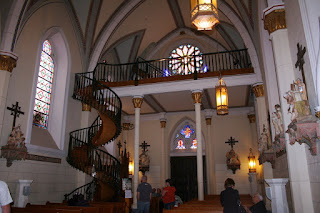 Can you imagine climbing up and down those steps, basically a giant spring, without handrails? Yikes!

From Loretto we walked over to San Miguel Mission. Built in 1610, this is the country's oldest church still in continuous use. 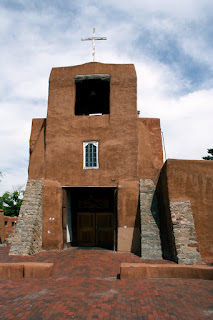 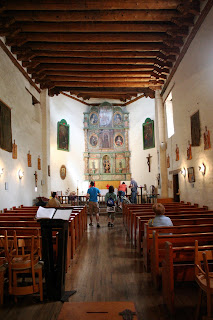 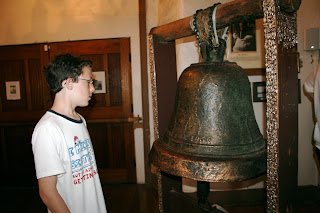 It's believed this bell, which once hung in the bell tower, was cast in Spain in the 1300s.

After visiting the chapel and the mission, we wandered around the Plaza area for a while. Since I misread the guidebook, we missed out on the Palace of the Governors (another museum—the kids were probably museum-ed out anyway). And since I was alone in my fervent desire to visit the Georgia O'Keeffe Museum (sniff, sniff), we just walked and enjoyed the scenery. 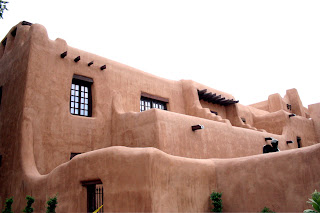 It was around this point in our travels that Ryan updated his Facebook status to reflect his adobe fatigue! 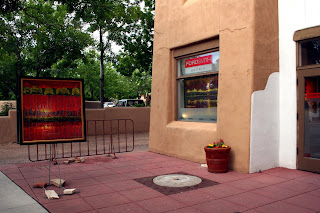 As we wandered, we came across several of Santa Fe's many nifty art galleries. We were content to window shop for almost all of them, but when Brett saw this artist's work, he was drawn inside. All four of us fell in love with Ford Smith's work. When we registered to win one of his giclees, the entry form asked our favorite work. Katie could NOT believe that I didn't agree with her selection for the "best." That was a fun discussion!

We also happened upon the Chuck Jones Gallery. When Brett and I saw the name, we thought that couldn't be the Bugs Bunny Chuck Jones, but sure enough, it was! We saw quite a few of his cels and art inspired by Jones. Cool stuff.

Of course, we had to get some good New Mexican food before we left town, and John T. had recommended La Choza. Turns out it was an excellent choice. You just can't go wrong with all that blue corn and all those green chiles!
Posted by See-Dub at 8:54 PM