On Monday morning we were ready to follow the advice of the Texan who checked us in the night before. She had recommended we eat breakfast at El Tovar. It's the nicest lodge at the canyon, but dinner can be a hard reservation to get (not to mention expensive). So as soon as we were up and at 'em, we walked from our room to the Maswik shuttle stop. 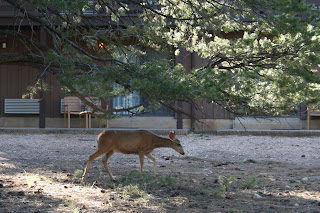 Along the way, we came across some deer. 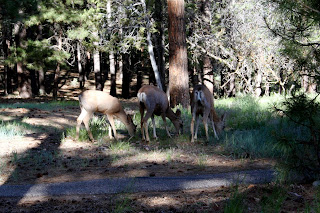 Before we got to our stop, we found even MORE deer! 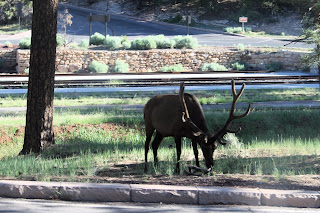 Once on our bus, we even saw a bull elk enjoying his own breakfast! 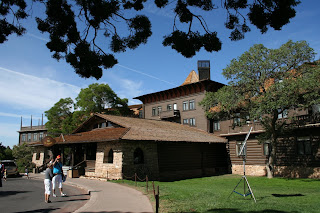 El Tovar looks rustic, but it's really fancy inside. A sign advises guests that backpacks are not allowed, and upscale gift shops are just inside the front door. 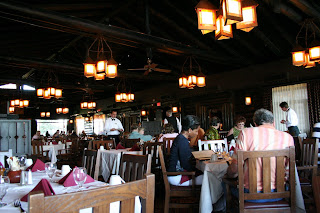 We had barely entered the dining room before exiting diners started offering suggestions of what we should order. "The french toast is to die for," one woman told us. "The cinnamon rolls are amazing," offered another. 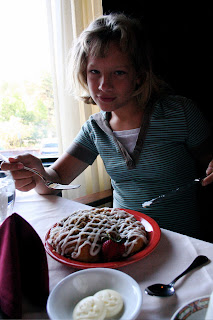 Katie took the cinnamon roll advice, and yes, it was delish! 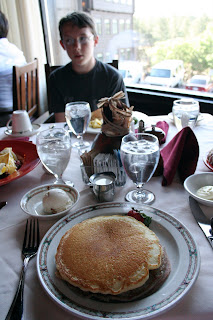 I ordered the El Tovar pancakes: blue corn, buckwheat and buttermilk served with prickly pear syrup. Mmm, mmm, mmmmmm... I got the pancakes so I could split them with Brett who ordered the... 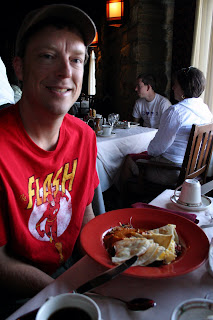 southwestern quesadillas. Oh. My. Goodness. HEAVEN ON A PLATE. He and the kids made fun of me for almost crying over how good this food was, but really? BEST BREAKFAST EVER. No lie. 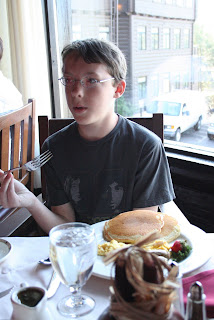 Ryan ordered eggs, sausage and pancakes. He was disappointed with his selection, saying Kerbey Lane or even IHOP makes a better pancake. Bummer.

With breakfast behind us, we did a little souvenir shopping, checked out of our hotel room, and then got in line for the Hermit's Rest shuttle. From there we headed to the westernmost parts of the park that are accessible only by shuttle bus or on foot. 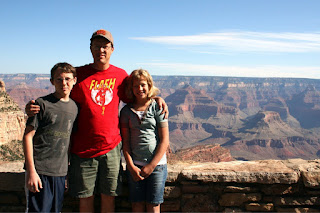 We skipped the first few shuttle stops and then hiked along the rim trail, a mostly paved but sometimes rocky path that connects the overlooks along the south rim. 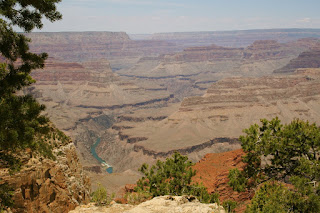 While most of the park around Grand Canyon Village had been crowded, these rim trails were virtually abandoned. We had to wait for about 20 minutes to board the shuttle to get out to these trails, but once we got out there, we saw maybe five other people on them all day. 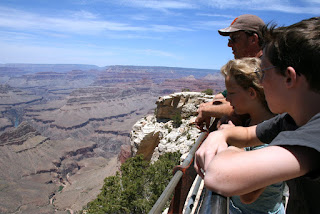 And of course, the views out there are spectacular! 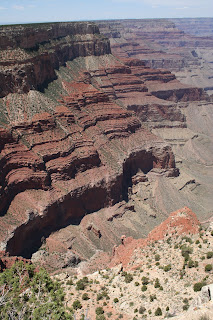 It became my habit to walk behind Brett and the kids as we hiked. At first it was so I didn't slow them down, but as the trails became more treacherous, it was so I wouldn't scare the kids! There were times when Ryan or Katie would stumble, and I would gasp—usually not audibly—and if I were behind them, they'd never know. I was afraid that I might startle them if they saw my fear! But really? We were walking on some ridiculously narrow walkways and at times we were inches—INCHES, I tell you—from death. (Brett preferred to say we were inches from oblivion, whatev.) One little slip on a piece of gravel, one misstep, and... YIKES! I literally had to cover my mouth at times to keep from crying out in fear.

Obviously, I was too busy praying to take pictures on the scariest parts of the trail, but maybe the photo below can give you the tiniest hint of what I'm talking about: 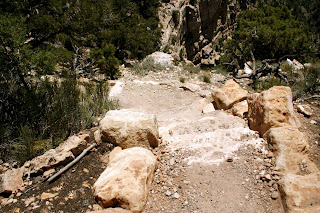 These steps (and there usually weren't actual steps, just a steep incline or slope down) took a sharp turn, and on the other side of that white rock there at the top center? OBLIVION.

Of course, we all survived. In fact, an overwhelming majority of canyon visitors survive in spite of the book we kept encountering at the gift shops. And even though it was an exhausting hike and emotionally draining, what with death lingering at every turn and all, it was absolutely worth it for these exhilarating vistas. 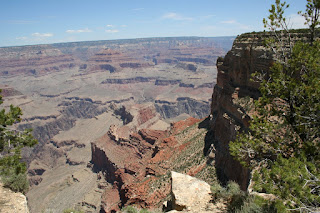 It IS grand, you know.

After our long, death-defying hike, we took Katie to a visitor center so she could turn in her Junior Ranger materials for her badge. Then we were on our way! It was sad to say goodbye to this natural wonder.

After a L-O-N-G lunch break in Tuba City (thanks to a woefully slow McDonald's), we made our way to Cortez, Colorado. Along the way, we drove past Monument Valley. Because of our itinerary change (to allow for more time at Mesa Verde the next day), we didn't have time to drive through Monument Valley, the setting for several westerns, but we were pleasantly surprised that we could see much of it from our car! 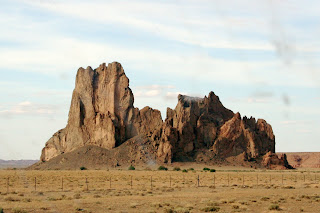 We had hoped to make it to Four Corners before it closed at 8 p.m., but wouldn't you know it, we arrived right at 7:59. Thanks a lot, Tuba City Mickey D's! We joked that we should draw some lines on a piece of paper since we were THIS CLOSE to the spot where Utah, New Mexico, Colorado and Arizona intersect, but still. Frustrating. 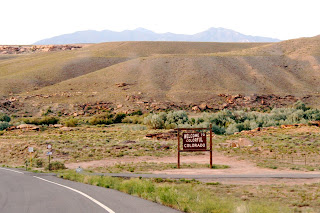 We'd heard that the scenery would change once we crossed the Colorado state line. Boy, did it ever! From the time we left Grand Canyon, Arizona had been dull, dreary and sandy. Once we crossed into Colorado, the terrain was more colorful and hello, mountains!
Posted by See-Dub at 11:40 PM