Why I cried at the football game.

No, this isn't a joke about our joke of a football season. No, this is about something that happened before the game even began.

UT (and many other colleges, I assume) traditionally has some sort of veterans recognition at the game closest to Nov. 11. This year that ceremony involved honoring a Longhorn football player who has served in the military. Then soldiers as well as veterans in attendance were asked to stand so we could all applaud them. It was a nice tribute for the men and women who serve our country, but it was nothing out of the ordinary.

Then came the national anthem. During the Star-Spangled Banner, the announcer said, we would see on the big screen the names and pictures of Texas service men and women who had died in action since last Veteran's Day.

Before that announcement even registered in my brain, the anthem was playing and the names and pictures were rolling. And then I saw him. 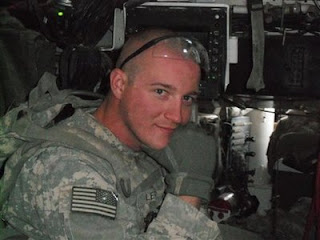 His name is Joseph M. Lewis, but when he was in my English class, we knew him as Joey.

Seeing his picture hit me like a ton of bricks, and the tears just started flowing. When I got back to our hotel that night, I found this online:

As the first anniversary of Joey's death approaches, may God grant his family and friends a special measure of peace and comfort.
Posted by See-Dub at 9:21 PM

Thank you so much for posting this. It prompted me to check for a memorial for my cousin and sure enough, I found one. It is so hard to believe it has already been 2 and a half years. His sister and her husband wrote and performed a song at his service. It is at the end of his video. They played, "If you're reading this" during the service while showing a slide show of him growing up. It's hard for me to think of anyone else when I hear that song now. War sucks! That's all there is to it! here's the link to Jonathan's video.
http://www.youtube.com/watch?v=rf8AHewkPG0
Have I mentioned lately that I love that you are my friend? Cause I do!