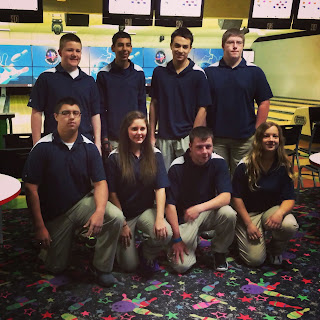 We followed up Saturday's wins with a trip to the high school bowling regional tournament in Plano on Sunday. As a member of her school's JV team, Katie was added to the varsity roster for this tourney. It was quite an honor for her to be grouped with these upperclassmen! 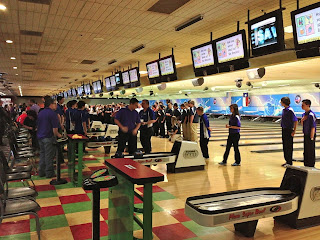 This was our second visit to a big high school bowling event. It all starts with team introductions and the national anthem. Then the tournament begins. It's a baker format: Each team has five bowlers who alternate frames (meaning each bowler gets two frames each). RHS is fortunate to have a strong anchor, the bowler who gets the fifth and last frames. More often than not, he bowled three strikes to end the game. 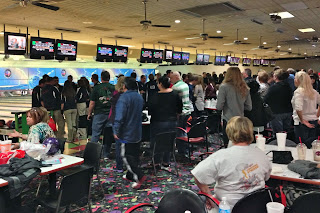 These tourneys are massive with more than a dozen teams with up to eight players each, not to mention all the parents and fans. Because a lot of the bowlers stand to watch their teammates roll, parents end up standing on chairs to see. A few times, I just listened to the crowd's reaction and kept an eye on the scoring screen to "watch" the action.

The RHS team was in second for a good part of the day, so advancing to state was just about guaranteed. AHS, the team that dominated in the Huntsville tournament, held the lead through most of the regional. But in one of the last pairings, RHS had a head-to-head showdown with AHS. AHS pulled out to an early lead, hitting strike after strike. Then the tide turned. RHS won that pairing by less than 10, but that, combined with a strong finish, pulled the Rebels ahead at the end. It was all very exciting, everyone hanging on every roll. It's crazy how vocal the fans would get! (Then again, I can't say a word about loud sports fans.) 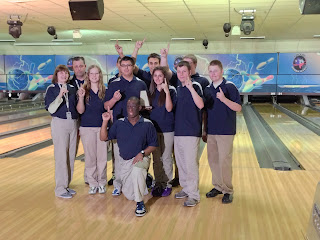 Katie bowled one-half of a frame, but she was still thrilled to be a part of this team, to get to support these clutch bowlers who pulled out the win. And as a freshman, she's getting some great experience in this championship atmosphere.