This week R spent five days at Camp Impact on the Oklahoma Christian University campus in Edmond. Because the camp director wanted a parent to oversee R's factor infusions, K and I spent a few days in Oklahoma, too. R left the church building right after second service Sunday, and K and I hit 35 Monday right after lunch. Our first stop was at the camp to deliver a friend's left-behind backpack. It was strange to see all these kids from church out of their usual environment, but it was so good to see R and his buddies having a good time.

After that, K and I checked into our hotel in Oklahoma City and then went to Cracker Barrel for supper. K enjoyed the IQ tester at our table... 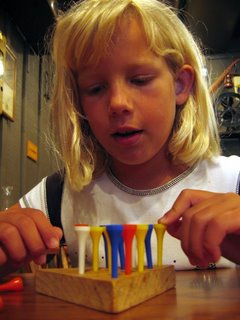 as well as the giant lollipop she bought from the Cracker Barrel store. 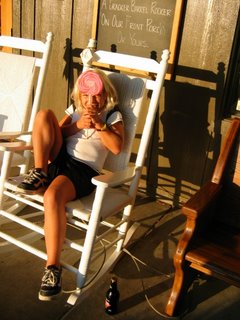 After dinner we headed back to our hotel and swam in the indoor pool (TOO COLD!) and soaked in the hot tub (JUST RIGHT!).

Tuesday morning we woke up early to head back to Edmond for the factor infusion. Of course, R's an infusing pro so that was easy. After we walked R from the nursing station back to the dining hall to join his fellow campers, K and I had the rest of the day free to sightsee.

Our first stop was the Oklahoma City National Memorial. It was remarkably moving. It was so moving that I'm going to give that part of our trip its own entry later. Just WOW.

After that we found a mall with a Build-a-Bear Workshop in it. K has had a giftcard and I've had discount cards for that place since her birthday party at our Fort Worth BABW last October, so I figured this "just the girls" trip was the perfect time to redeem them. So may I introduce Dirk Noweisski (my creation) and Kesey (K's): 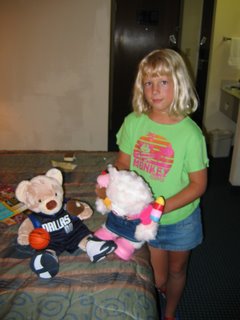 After a quick pit stop at our hotel, we again hit the streets of OKC, this time to see Bricktown. Bricktown is the old warehouse district that's been renovated to include a bunch of restaurants and the big draw, a canal a la the San Antonio Riverwalk. Of course, we had to ride a canal boat! 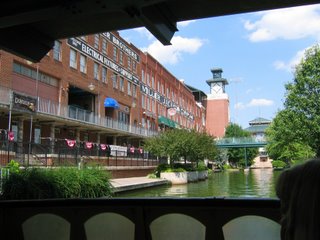 Our boat captain told about the history of Bricktown and about the sales tax OKC citizens had voted on to pay for improvements all over the city. He also pointed out the corporate headquarters of probably the best Cherry Diet Coke and Cheddar Pepper provider in the world: 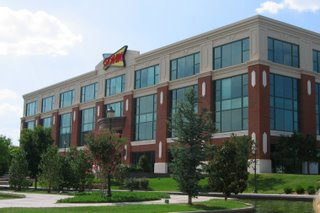 The Sonic building is right there along the canal. Before the day was up, K and I ate supper at the nearby Sonic cafe--one of the indoor Sonics where customers order from their booths by picking up a phone. Fun stuff!

Farther along the canal we saw the first of what will eventually be several statues to depict the great Oklahoma land rush. 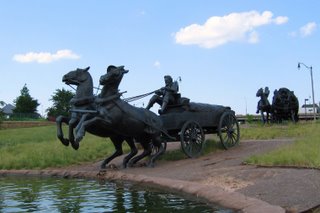 The statues were impressive and all, but I couldn't stop thinking about how the sooners got their name. They were basically land thieves! They started staking their claims sooner than they were supposed to! Gotta love that.

Along the canal are several restaurants, including Toby Keith's I Love This Bar and Grill, a movie theatre, and Bass Pro Shops. The area is also home to the Bricktown Ballpark where the Oklahoma Redhawks play. 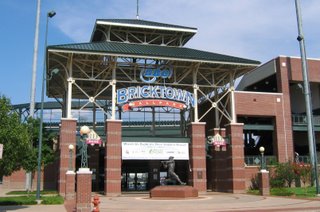 The Redhawks are a triple-A minor league baseball team affiliated with the Rangers. K was up for a game, so we headed to the ticket booth. Turns out Tuesdays are two-fer days at the park, and with a Coke can, we could get two-for-one admission. A quick trip to a convenience store and 75 cents later, we had our Coke can and could buy two prime seats for $11. Not bad! We ended up being between home plate and the home dugout to watch the Redhawks take on the Round Rock Express. 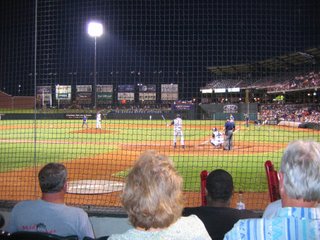 The free thundersticks they were giving out helped K get in the mood: 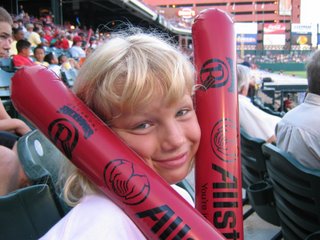 The two-for-one soft drinks were a nice surprise, too. Four bucks got us two big drinks in the souvenir cups. What a deal! We both got into the game and were--believe it or not--disappointed when Oklahoma lost 2-1. (That may be the ONLY time you'll ever hear me say that!) I've always heard that minor league clubs try to generate excitement at their games, and now I know it's true! Every half-inning had some kind of crazy race or silly stunt. It made for a great evening, even if we were surrounded by a jillion fans in OU T-shirts and hats.

After the game, K wanted one more boat ride, so we hit the canal for a third time. The captain of our second cruise had suggested we take advantage of our all-day wristbands and come back after dark, and we were glad we did! 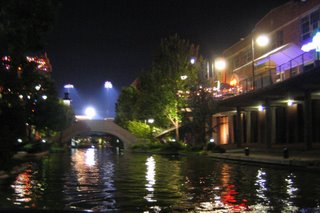 The lights were pretty, and we got to hear what a third captain had to say about the canal and OKC. By the time our ride was finished, it was getting late. We quickly drove past the memorial again just to see the chairs lit up, but then it was time for bed.

Wednesday morning at camp was a repeat of Tuesday, but this time, we had to say goodbye to R. Of course, knowing we'd see him back home the next afternoon made for a pretty easy farewell! Anyway, we did factor again, and again, he did a great job. (Notice K's "delight" at this part of our trip!) 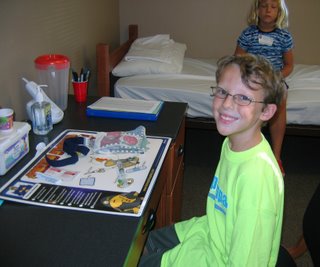 After the infusion, K and I loaded up and headed home. We ate lunch in Ardmore at Mazzio's Pizza, which brought back memories of many a Friday night in Tyler after the high school football games. We were thrilled to get home before 2 that afternoon to see B/Daddy and give him a great big hug!

I have to admit that I was surprised by all the fun things we found to do in OKC. That OU paperclip symbol sure seemed to be everywhere, and one radio station played Boomer Sooner for no apparent reason. But beyond that, OKC has plenty to offer! We had several other places we would've loved to visit if we'd just had a little more time.

The next day R was home, too, so we celebrated the reunion of our Fantastic Four! 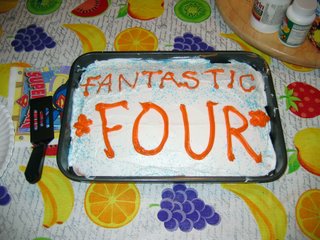