Our adventure began at the airport. R&K had never flown before, so they were interested to see what happens beyond the security checkpoint. We ate lunch at McDonalds and were on our way! The view from the plane entranced the kids, and we took a bunch of pictures of the landscape and clouds. 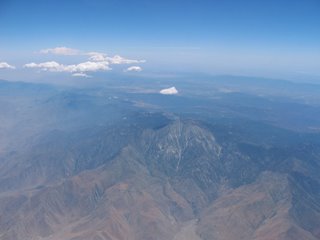 After landing, we took the shuttle to the rental car agency. We were lucky to have a relatively short wait, but B was stuck guarding all our stuff while I dealt with the guy at the counter. 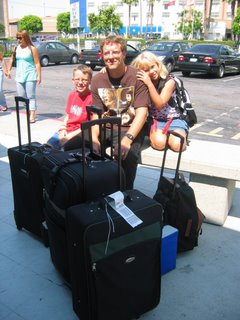 We ended up traveling with 10 bags: four suitcases, four backpacks, my purse, and our cooler for R's factor. (After all my stressing over getting syringes through security, not a soul said a word about all of the needles in our carry-on.)

Our car wasn't ready, so they gave us a Saturn Vue, a compact SUV. It ended up being the perfect size for us and our 10 bags!

From there we just had to get our feet wet, so to speak, so we headed towards the Pacific. Our first stop: the Santa Monica Pier. It was GORGEOUS! 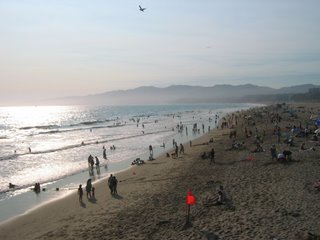 The temperature in the upper-70s combined with the cold water of the Pacific let us know that we weren't in Texas anymore. We spent a little time walking along the famous pier: 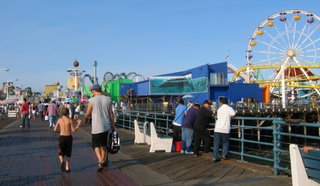 At one end of the pier is an amusement park. Elsewhere, lots of vendors sell T-shirts, trinkets and miscellaneous art, but we were there mostly for the view. 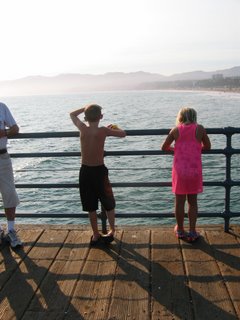 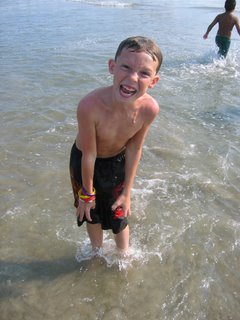 From the beach we headed down Wilshire toward our hosts' house. The drive alone was amazing! We saw Beverly Hills, Rodeo Drive and more luxury cars than we could count. I also got my first real taste of LA traffic. Good grief, those are some narrow lanes! And everybody keeps "beeping" (K's word for honking)!

After our scenic drive, we ended up at K&D's beautiful house, deluxe accommodations to be sure. 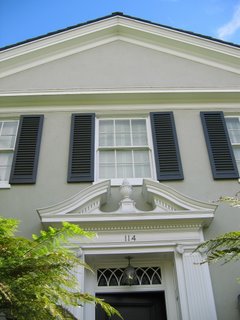 Even though they'd been at work all day, K&D were making pizza for us when we arrived. If you know K&D, you know they weren't just slapping some tomato sauce and pepperoni on the crust. We're talking gourmet pizza with the freshest ingredients, served alongside a tasty salad. We ate dinner in their backyard gazebo. The air was cool, and the aromas from their rosebushes and lemon trees were delightful.

B&I had our own suite, and R was set up in the den next to K&D's bedroom. Our K opted for a room downstairs, removed from the rest of us but all her own. (It was the same room where I stayed for the Rose Bowl in January!) Of course, before we went to bed, the kids had to explore the house, and they were impressed with the "secret" wine cellar (hidden behind artwork) and all of the animal paintings and sculptures around the house.

So that's Day 1. We were so thankful to have arrived safely, and we were excited that our journey had just begun.

Sounds like you guys are having a great time! I remember the first few times we flew with Chase's medicine, needles, and shots. I was so stressed about it because I just knew that it would cause a holdup at security. It has never caused even a second glance.