On Tuesday, Katie and I headed to downtown OKC to see the Oklahoma City National Memorial. Ever since the memorial was dedicated, I've wanted to see it for myself. Katie didn't know much about the bombing, but I'll never forget that day in April 1995 when 168 people died. 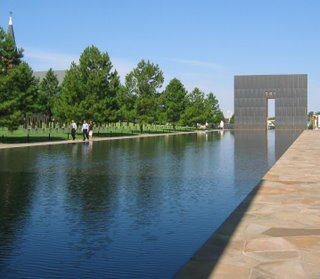 The memorial is stunning. When we first walked onto the grounds, we couldn't miss the "Gates of Time," two large structures with 9:01 and 9:03 on them. The flowing water between the two times represents 9:02, the minute the bomb went off. To one side of the pool is the field of chairs, each representing a victim. On a grassy area that's the footprint of the original building, the 168 chairs in nine rows represent the nine floors of the Murrah building. On the other side of the water is the Survivor Tree, an elm that survived the blast despite being in a parking lot directly across from the explosion. Its outline is now part of the memorial's logo. 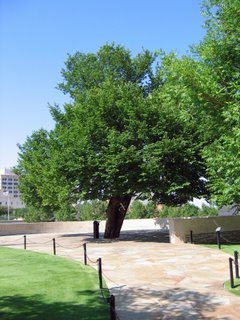 Katie and I walked up to the Survivor Tree, which overlooks all of those empty chairs. The tears just came. I tried to explain to Katie how her Daddy and I had been married a little less than a year when the bombing had occurred, how we watched the news coverage in our first home, our apartment in North Richland Hills. I told her how sad everyone was that this terrorism could happen here on American soil and so very close to home. Of course, the enormity of 9/11 seems to overshadow Oklahoma City now, but the '95 bombing really woke me up to the hatred that's out there. Katie was really trying to grasp why this was such a big deal, so I told her how each of the empty chairs represents lots of people--friends, family, coworkers--who have empty places in their lives now because of that day's events. 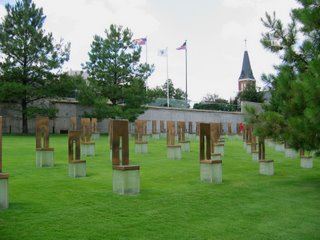 I explained why some of the chairs are smaller, how the daycare center that had been on the second floor was buried beneath floors 3-9, how the murder of these babies and toddlers had underscored the depravity of those who did this.

And then I told her about Baylee.

Everybody remembers Baylee. She was one year and one day old on April 19, 1995. That day, as a firefighter gently cradled her lifeless body, a photographer captured an image that would symbolize the bombing. That's the photo that everyone who remembers that day can recall, a photo that led Baylee's mom and the firefighter to sue to halt its publication. That iconic image isn't the one that had the biggest effect on me, though. Soon after the bombing, the newspaper ran photos of all the victims. Among the men and women, boys and girls, there was this picture of Baylee, in her little Minnie Mouse overalls and pink headband, smiling for all the world. That's the picture that shook me to my core the second I saw it. I can still remember shaking, crying, taking the paper to Brett in another room of the apartment. Sweet Baylee!

After walking around the outdoor memorial, Katie and I toured the museum nearby. The museum does an exceptional job of telling the story of that day and the days that have followed. It shows what life was like on that April morning before the bomb exploded at 9:02. Lost watches, briefcases, coffee mugs and shoes pulled from the rubble were on display. Survivor stories--written ones accessed through a computer and filmed ones playing on large screens--helped us feel the chaos that followed the moment when their workplace crumbled under the feet and over their heads. One section had information and artifacts from the investigation that ended with McVeigh's execution (including the axle housing from the Ryder truck). Another section honors all the rescuers and other people who helped OKC heal after the bombing. And then there was the room with the funeral music.

In that room are 168 plastic boxes, each with a photo of a victim, most with personal items the victims' families chose to represent their lost loved ones. There were family photos, Bibles, lipstick, awards. And in one box, there was a Baby Miss Piggy toy. That was Baylee's box.

And she was just one of NINETEEN children who died that day. Baylee's chair is just one of 19 empty little chairs on a grassy field in downtown Oklahoma City. 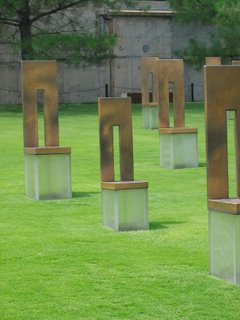