After breakfast with K&D at a restaurant along Beverly Boulevard (the same one we frequented the day of the Rose Bowl), we headed to Hollywood. Our first stop was the Walk of Fame and Grauman's Chinese Theatre. 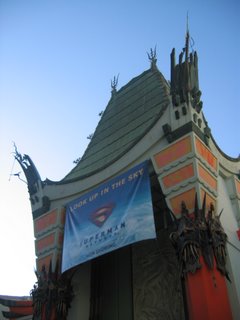 We parked at the new-ish shopping center (Hollywood & Highland, home of the Kodak Theatre from Oscars and American Idol fame) and emerged into quite a scene! People were packed into the theatre's forecourt, famous for all the handprints and footprints embedded in concrete there. 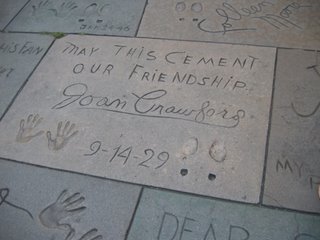 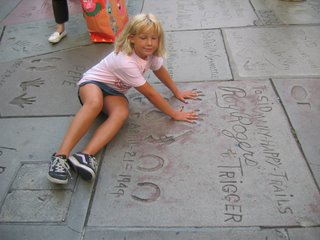 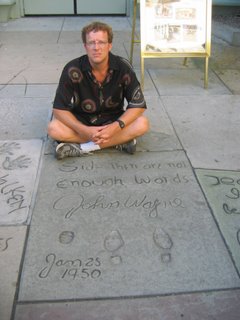 We also spent a little time strolling along with Walk of Fame. There are so many stars in that sidewalk! We felt like we saw just a tiny fraction of them all. 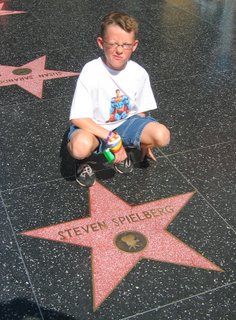 We did a little T-shirt shopping along Hollywood Boulevard, but then we had to cut our visit short. We had places to go, people to see!

Forrest J. Ackerman, or Forry, is the legendary editor of Famous Monsters magazine. For years he has collected memorabilia related to science fiction and monster movies. His former home, the Ackermansion, was practically a museum, and he would open it every week for fans to visit. He now lives in a smaller bungalow (which he's dubbed the Son of Ackermansion) and his collection is a tad smaller, but he still opens his home on Saturdays when he's in town. Lucky for us, he was in town that Saturday!

First of all, it's just bizarre to walk in off the street into a stranger's home. But once inside, you realize that's nothing compared to the weird sights inside. In a corner by the front window is Dracula's cape. 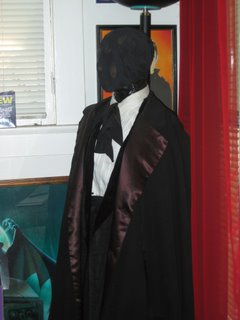 And over there, by the dining table? That would be Lon Chaney Sr.'s prosthetic teeth from London After Midnight. 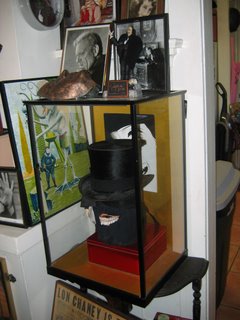 In every room, you find movie posters, lobby cards, autographed photos, random props and figures. You have to move a loaf of bread to see a model of his old house on top of the refrigerator. On the dining room table, to get to some books on display, you have to push past the electric bill. And in the middle of it all, there's Forry, signing autographs, accepting a cameo role in a film (this one will be his 208th appearance), answering questions (he's seen his favorite movie, Metropolis, 105 times), and posing for photos. 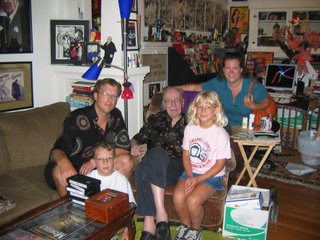 I stumbled upon Forry's website during all my obsessive trip researching, and I'm so glad I did! B had called before we left Texas to make sure he'd be home, and we were all glad it worked out. All of us were impressed, but for B, this was a pilgrimage worth the whole trip west!

With that pilgrimage complete, we began another: searching for a good view of the Hollywood sign. Our hostess, D, had told us Griffith Park offered a pretty good view, so we drove up the hills toward the (closed) observatory to take a look. 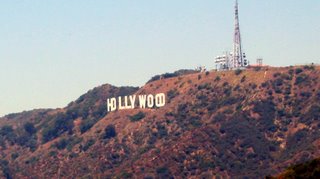 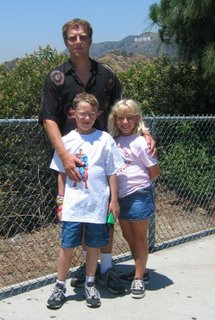 We could see the sign, and we also had a nice view of LA, too. Who knew smog could be pretty? 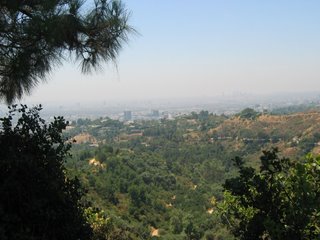 Oh. And that cool weather that welcomed us on Friday? By Saturday, it was long gone! Our mini hike left us sweaty! Good thing our hosts had insisted on supplying us with a big thermos of ice water and some "emergency chips" in case we needed rations along our journey. At Griffith Park we took a much-needed water and snack break to revive us.

After that, it was time for my own pilgrimage. Anyone who has known me for long knows about my obsession with The Brady Bunch. I have always loved that corny show, and I've collected Brady paraphernalia for years. So while in Southern California, I just had to see the house that was used for the exterior shots in the show. (The interiors and yards were shot on a soundstage not too far away.) I found directions to the actual house and knew to expect it to look quite a bit different from the way it appeared in the '69-'74 sitcom. I knew the owners had put a fence to keep onlookers off their property; I knew it didn't really have a big window in front (a fake was hung there to make the house appear to have two stories); I knew the tree in front had grown considerably in 30 years. What I didn't know was how very close to the place we could get just driving by and then walking on the sidewalk! The front yard is not that large, so as we drove up next to the house, we were SO VERY CLOSE!

Of course, I responded in typical fashion: I panicked! I was so terrified we'd get in trouble just being there that I didn't want to get out of the car to take a picture. I managed to convince myself that we could nonchalantly get a couple of snapshots from our moving SUV. Yeah, right. Fortunately, B didn't let me get away with that! We parked up the street a little and made a run for it. The kids and I posed in front of the house while B snapped a few pictures. I just knew some security guard would come after us, but B kept pointing out that we were on a public sidewalk and weren't doing anything to bug the owners or their neighbors. I'm so glad he talked some sense into me! Just look at our groovy pictures! 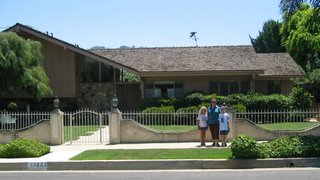 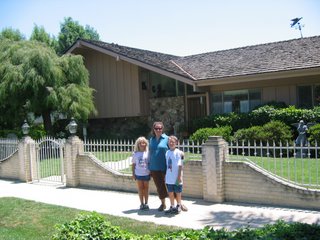 So with three pilgrimages complete, we were hungry! We made our way to In-N-Out Burger on Sunset. The place was packed! We were lucky to have a place to sit while we devoured our burgers. 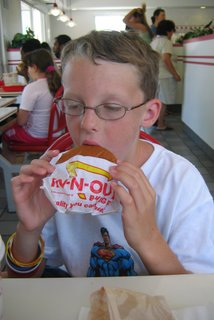 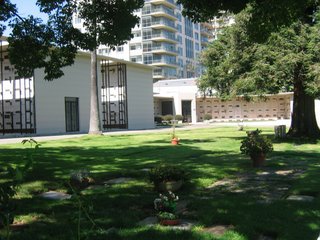 Yep. We went sightseeing at a CEMETERY! This place is tucked behind a couple of tall office buildings, and without really good directions, we never would've found it. Lots of tourists do manage to find it, however, because this cemetery is the final resting place for gobs of celebrities. I had a map (printed from the internet), so we wandered around, paying our respects to some famous singers and actors. 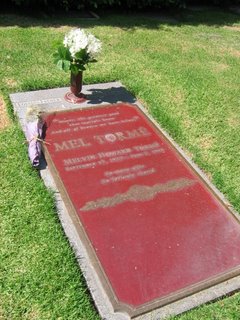 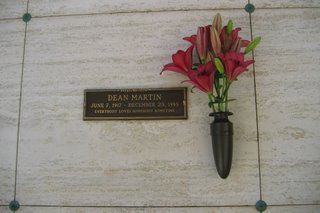 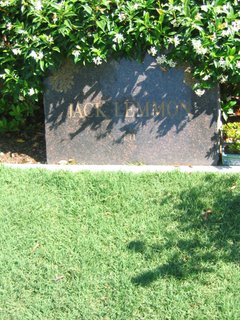 (In case you can't read through the shadows, it says, "Jack Lemmon in" on the tombstone.)

The big draw at Westwood, as evidenced by the flow of traffic, the darkened marble and the lipstick, is this marker: 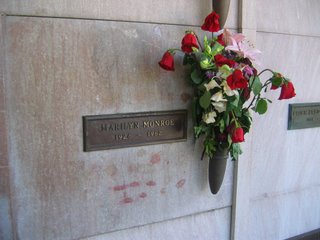 It's strange to see how the brass marker is so much more worn than the others there. It seems like everyone who visits there has to touch her first name: Marilyn.

After that somber interlude, we headed back towards Beverly Hills and drove down North Roxbury and a few other residential streets. Many stars from days gone by have lived on Roxbury, including Lucille Ball and Jimmy Stewart. We tried to identify a couple of houses, but trying to drive without getting lost was more than I could handle. We settled for ogling the fancy houses, regardless of what famous people might've lived in 'em!

We also made a detour to drive past George Reeves' residence. We found ourselves up some pretty steep roads. On a very busy, hilly street, it took B some nerves of steel to get this shot of the last home of TV's Man of Steel. 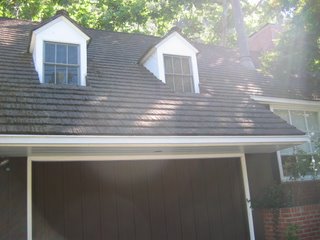 Because we had left Hollywood Boulevard before we'd seen much, we drove back there before the day was done. We went back to Grauman's to see a few more handprints and footprints, and we walked along the Walk of Fame a little more, too.

By the time we returned "home" to K&D's, we were exhausted. For supper, our host K grilled steaks for us on their outdoor fireplace, and D made some amazing spaghetti. After another delicious meal, we were zonked.