Skunks on a deck.

Yep. SkunkS. Plural. As in more than one.

Tonight, while playing our nightly game of Spot the Skunk, I was just watching Mr. S eat cat food. The flashlight on him didn't seem to deter him at all, which was really interesting to me. So I started darting the flashlight around the deck to see if the skunk would follow the light. Cats do that, right?

Well, that's when I discovered that Mr. S is not alone. A slightly larger skunk came from under the deck stairs to join Mr. S in his feast. I called B and the kids to witness this, and within seconds, we saw not just the two skunks chowing down, but a third skunk was barely visible. It looked like he/she was headed home--underneath the deck.

Excuse me while I shudder. 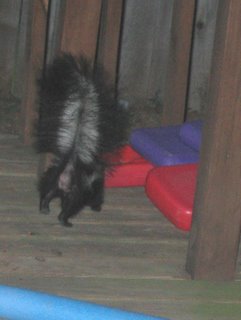 (I took this picture in a momentary fit of bravery/foolishness. Since the skunk was heading "home," I took a chance to capture the moment. Of course, that was before I knew we have at least three skunks in our yard!)

So after Googling, I learned that mommy skunks have their kits around June, and when those kits are around two months old, they start hunting with Mom. June plus two months equals right now. Grown skunks are solitary animals, so we must have a mom and her two (oh, please don't let there be more than that!) babies.

The Googled sites said to remove all unnatural food sources first, so we will now be feeding our kitties (not to be confused with the kits) indoors at certain times of the day. The Cat Food Cafe is again closed.

Speaking of the cats, they seem to be cohabitating quite nicely with the little stinkers. Right after we had the triple sighting, KitKat came up to the glass door--startling us much like ChaCha had last night. We opened the door to let her in, thinking she might be frightened, but she was no scaredy cat!

Email ThisBlogThis!Share to TwitterShare to FacebookShare to Pinterest
Labels: home

Ha! I am laughing remembering you tell the story at bunco of risking your life for this skunk picture for the blog!!