During our second day at Disneyland, we had another chance to enjoy our favorites from Tuesday. Our first stop was Tomorrowland because we couldn't wait to ride Space Mountain again. 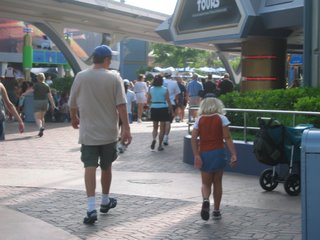 You could say the ride knocked our socks off, but it would be more accurate to say it knocked K's ears off! Before "liftoff," K carefully stowed her Mickey ears in the pouch in front of her seat. When the ride was over, all four of us were too excited to remember to grab her ears! It was disappointing, but we learned a lesson about hanging on to our stuff.

On Wednesday we also took a spin through Autopia, and K was especially pleased with the souvenir driver's license.

After a taste of Tomorrowland, we journeyed into Fantasyland to ride many of the storybook attractions. Of those, Peter Pan's Flight was our favorite.

The scenery in Fantasyland was fantastic, too! 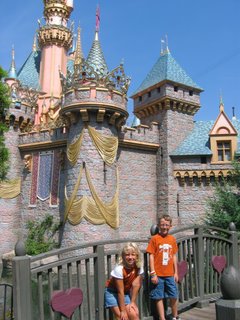 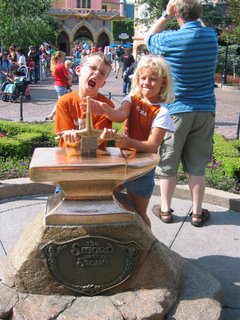 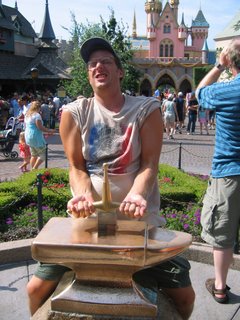 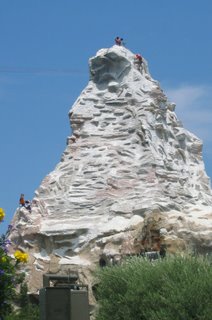 (Can you see Mickey up there on the Matterhorn? We watched him climb to the top to plant a special 50th anniversary flag.) 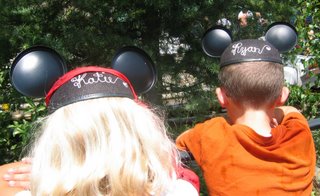 (Yes, we bought K another set of ears [pirate ones this time] when we bought R's. We couldn't help ourselves!)

We managed to ride the Matterhorn and Splash Mountain again, and we just had to take another spin through Pirates and Haunted Mansion.

Back in Tomorrowland, we ate a late lunch at Pizza Port: 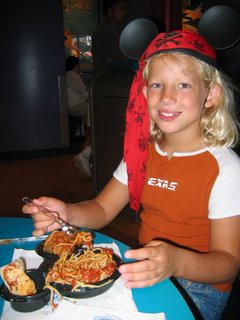 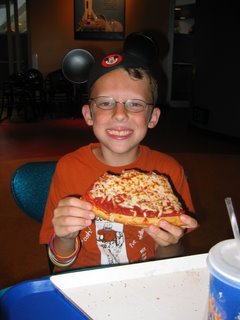 And then the kids got to meet Buzz Lightyear! When he saw their shirts, Buzz was quick to show us a "Hook 'Em"! It was so quick, I didn't even have my camera out yet. Buzz was one of many characters and Disney castmembers who flashed their Horns. 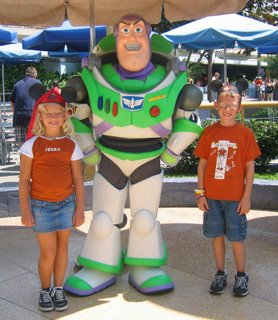 Before leaving the Magic Kingdom, we saw the 50th anniversary retrospective, which gave us an interesting look at the park's history. Since B wouldn't be with us for our third day at Disney later in the vacation, he got a good last look at Disneyland before we made our way to California Adventure. 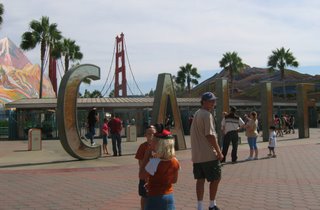 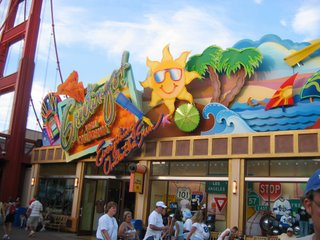 Once inside California Adventure, we were amazed to see SPACE! It wasn't nearly as crowded as Disneyland. After walking under the miniature Golden Gate Bridge, we took it all in. It's all California, from the tile mosaic of California scenes to the California tunes playing on the loudspeakers.

Speaking of the music: Before we left home, I downloaded a bunch of California songs from iTunes. I brought the CD with us, so by Day 6, we had listened to those tracks over and over and over. So when we heard "California Dreamin'" playing over the loudspeakers, we knew every word and could sing along. On our CD, the song right after the Mamas and the Papas' hit is Al Jolson singing "California, Here We Come." Imagine our surprise when the next song to play at California Adventure was that exact same recording! The song may not be rare, but the Al Jolson version? Really?

Our first area to visit was the Hollywood Pictures Backlot. It was a little disorienting to head down a street and only then realize that it ended much sooner than we thought, thanks to a painted backdrop. 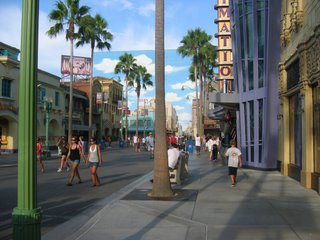 Our first destination was the Twilight Zone Tower of Terror. The ride, with its crazy elevator that dropped us several times, was made even better thanks to the Rod Serling intro video and the creepy bellhops who greeted us. 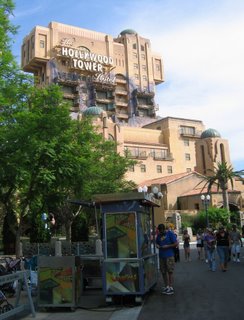 After that we saw Muppet*Vision 3D, which was a kick for us Muppet fans. 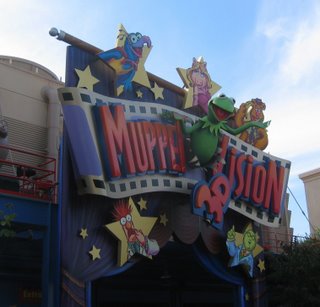 Across the park we found Paradise Pier, which had the California tunes playing, but this time in merry-go-round style. The highlight of this part of the park was the California Screamin', a phenomenal hypercoaster with a quick start, several good drops, and a loop right through Mickey's head.

Near the coaster was a stand with some yummy softserve ice cream. The ice cream combined with the Screamin' backdrop made this summertime scene: 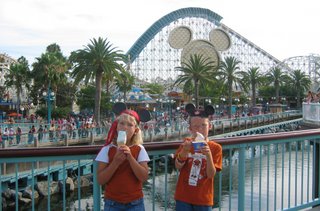 For the second time during our trip, we had ice cream for supper! Only on vacation! 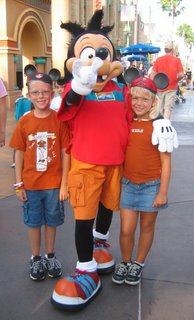 Because we were driving from Anaheim to San Diego, we tried to leave the park before it got too late. We were exhausted, but SeaWorld, the San Diego Zoo and the Comic-Con were waiting!