Our last full day of vacation. Whew! By the time this day arrived, we were plum tuckered. Since the kids and I spent one of our San Diego days driving back to Anaheim, this was our only chance to see the world-famous San Diego Zoo. Too bad it was also a day of record-breaking heat. (I don't know if the day's high temp really set a record, but it should have. As a native Texan, I have earned the right to assess heat, and let me tell you, it was HOT.) 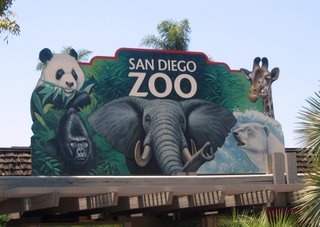 We dropped B off at his convention and headed to Balboa Park, home of the zoo. Once there we began with the bus tour. Because the wait was shorter, we opted for the top of the double-decker bus. The folks who waited an extra 45 minutes to an hour may have had shade, but at least we had a better vantage point. 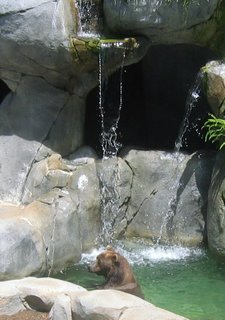 The tour gave us a fantastic overview of this immense zoo, and considering all the hills and valleys, I can't imagine seeing nearly this much of the zoo if we had been on foot. In fact, because of the heat, we ended up walking only a tiny portion of the miles of trails.

I did insist, however, that we sweat it out to see the pandas. When would we have this chance again, right? We walked the panda trail down, down, down, through an aviary, down some more. It was sweltering, but we were headed downhill to see the pandas, and moving sidewalks and escalators would get us back up. (Sense the foreshadowing there?)

We waited in line for our moment to see the pandas. It was odd, actually, to step into their habitat. 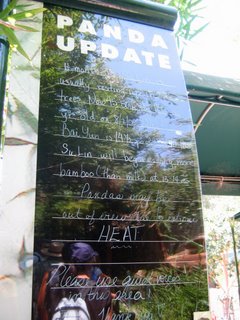 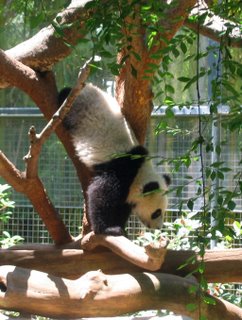 The animals don't like loud noises, so people were mostly staring silently at the creatures. A panda expert's voice came through the loudspeakers (softspeakers?) in hushed tones, whispering interesting tidbits about the pandas' eating habits. 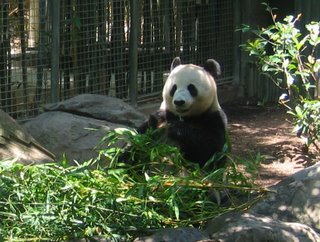 The loudest noise there was the crack of bamboo as a panda was chowing down. 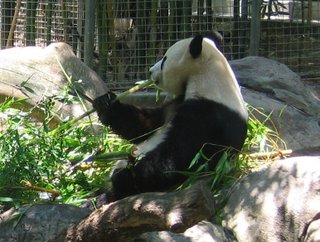 R and K were just melting, but bless their hearts, they hung in there because Mom just had to see the pandas. Her job as videographer kept K busy: 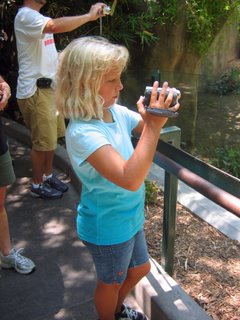 As soon as we made the walk through the panda area, we were all miserably hot. 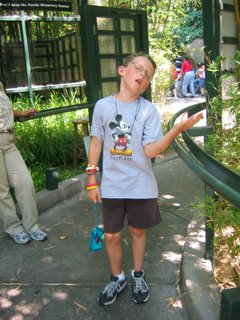 It was time to go! So at the world-famous San Diego Zoo, we did the bus tour, made a quick spin through the herpetarium to see the snakes, and hiked a million miles to see the pandas.

Oh. About those million miles. When we headed out of the panda exhibit, we discovered that the escalator was out of order, and the express bus was nowhere to be seen. We ended up hiking up, up, up, up many stairs, back through the aviary, and uphill some more to the zoo entrance. Lovely!

Our trip to the zoo was disappointing but definitely not because of the zoo itself. Even though sweat was pouring into our eyes, we could still see how amazing it is. I really want to go back someday, preferably in winter! The heat, combined with our exhaustion from nine days of vacation, made this excursion the only downer of the whole trip. And even with the heat, I'm glad we got at least a glimpse of the zoo!

I had planned to take the kids to one of San Diego's famous beaches later that day, but we were sweaty and miserable. Instead, we went back to the hotel and swam in the nice, cool, chlorinated pool. I read a book while R and K made friends with other tourist kids, and before too long, B called, ready to be picked up. We found an authentic San Diego Mexican restaurant for supper (OK, not really--we ate at On the Border), wrote a few postcards and called it a day. 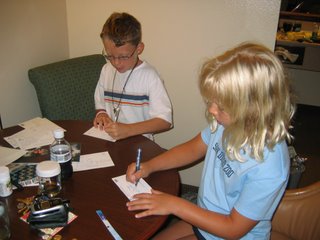 We were pooped! The next morning, we packed our bags and drove back to LAX, returned the rental car and waited for our flight. 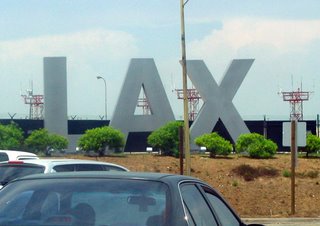 What a week! I thank God that we were safe and healthy for the entire trip. I'm so grateful that we were able to take this vacation and make all these wonderful memories!