San Diego! When we were "California dreamin'" way back in March, B mentioned that the San Diego Comic-Con would be honoring The Flash's 50th anniversary this year. B has collected Flash items for a LONG time and has forever been a big fan of the Scarlet Speedster. I did the math and figured we could easily add a side trip to San Diego if we went to Los Angeles. Besides, B had always wanted to attend the Comic-Con, THE convention for fans of comics, sci-fi and other media. Because of his writing gigs for Comics Buyers Guide and other publications, along with his past experience as a comics retailer (he used to co-own a comics shop), he was long overdue a trip to the Comic-Con.

Originally we planned for the kids and I to see the sights on our own for two of the three days we would be in San Diego. As the convention schedule was published, however, we realized that B wouldn't want to miss any of the Comic-Con! It was crazy, really, how many of B's favorites were celebrated in those three days: Flash, Forbidden Planet, Universal Monsters, and on and on. It was a good year for him to go!

So for me and the kids, here's what we saw of the San Diego Comic-Con: 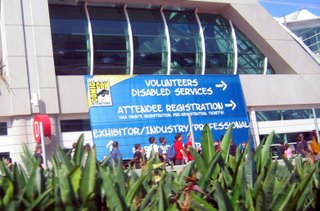 We picked this spot for our shuttle stop because it's near the door where B initially picked up his press pass. For three days, we dropped him off at the Convention Center and picked him up much later. The kids and I had plenty of adventures, and at the same time, B was making some incredible memories. I'll post some of his pictures later.

While B got his first taste of the famous Comic-Con, we headed to Mission Bay to see the famous Sea World! We went to San Antonio's version a few years ago, but this one had different scenery. 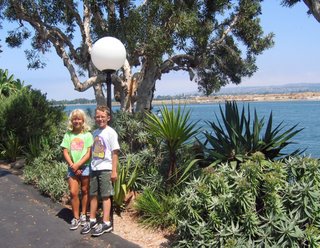 We were able to see several attractions right away. The shark encounter was fascinating, and not just for R, the world's biggest Jaws fan. K and I enjoyed seeing the sharks all around us as we descended into the exhibit. The Haunted Lighthouse, a 3-D movie, was just as much fun as we'd remembered from San Antonio. During the day, we also saw a friendly snake and these starfish that the kids could touch: 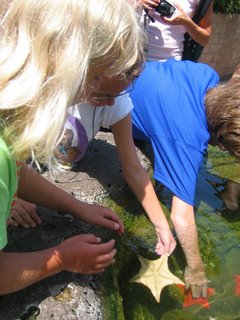 We saw plenty of shows, including the sea lion, walrus and otter show: 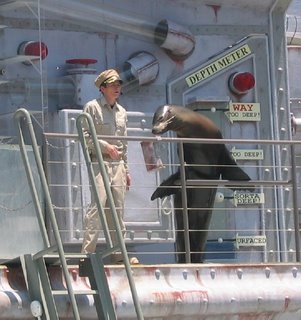 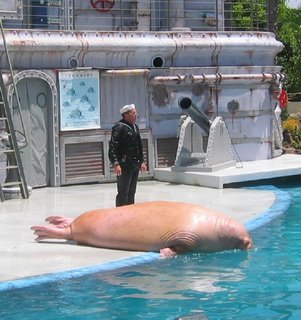 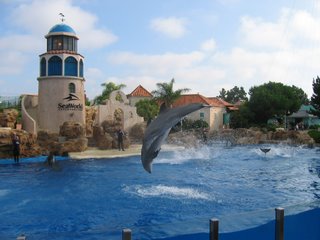 and of course, Shamu! 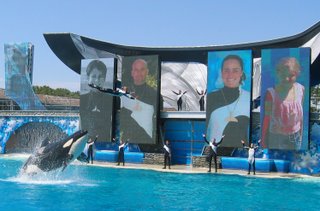 Naturally, Shamu is the star of this park. The kids' meals even came in Shamu-shaped lunchboxes!

The kids blew off some steam at Shamu's Happy Harbor, a huge play area just for kids: 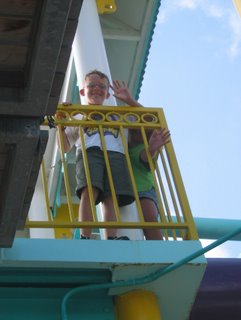 This Sea World location doesn't have a waterpark like San Antonio, but it does have a different kind of rollercoaster: Journey to Atlantis. 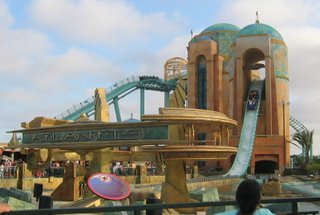 Atlantis begins like a flume ride, but after the big, splashy drop, the boat floats into a dark area and is put on a track. From that point on, it's like a regular rollercoaster. 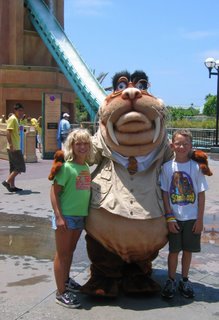 Except for not being able to find our rental car when it was time to go (SCARY!!!), our day at Sea World was delightful!