Another day for B at the Comic-Con, and a third day at Disney for me and the kids!

When planning our vacation, we discovered we could save money by buying Southern California City Passes, which include tickets to Universal Studios, the San Diego Zoo, Sea World and Disneyland. Each pass actually included a three-day Park Hopper ticket for Disneyland and California Adventure, and even though we had only planned on spending two days in Anaheim, it was still cheaper to buy the pass.

That was the plan: Anaheim on Tuesday and Wednesday, then San Diego the rest of the week. But Wednesday afternoon we discovered the greatness that is California Adventure, and our brief taste of that park let us know that yes, we would indeed need a third day in Anaheim! There were plenty of fun things we could do in San Diego Friday, but we just couldn't pass up another Disney day--especially since it was paid for!

So Friday morning, we dropped B off at the convention center and headed north for the 90- minute (or so) drive. I was a little nervous about driving a rental car by myself with the kids (What if we have a blow-out? What if we run out of gas? What if I get lost? What if I lose all our money?), but the drive was so beautiful, I almost forgot my worries. With the Pacific to our left and the mountains to our right, I had a hard time keeping my eyes on the road. It was amazing to see the sights we'd missed driving into San Diego Wednesday night. It may have been the scenery, or maybe it was the traveling music (We listened to the High School Musical soundtrack), but we were there before we knew it. 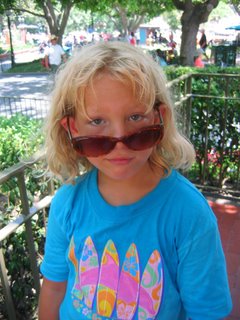 First off, we wanted to ride our Disneyland favorites one more time. We really wanted to hit the mountains (Splash and Space) again, but time (and FastPass) constraints meant we didn't get another spin in Space. We did do Haunted Mansion and Buzz Lightyear again, though, and we took some "last chance" pictures, like this one in front of Splash Mountain. 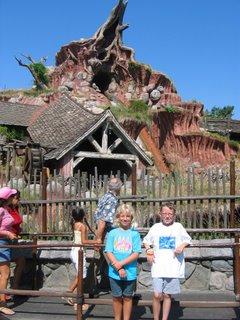 After another lunch at Pizza Port in Tomorrowland and some more shopping, it was back to California Adventure! We LOVED that place! The lines were short or non-existent, and the rides were FUN! We skipped a few attractions like a bug's land and the Grizzly River Run raft ride (below), but we still enjoyed the view of the bear-shaped mountain. Pretty cool! 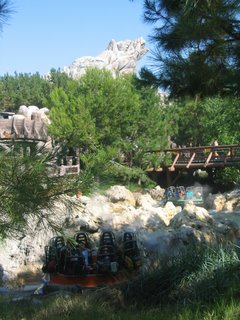 We did get to take plenty of turns on California Screamin': 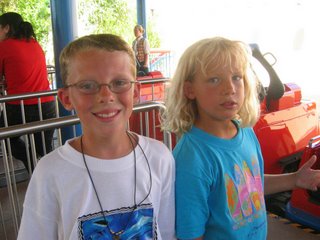 And we also experienced the Sun Wheel: 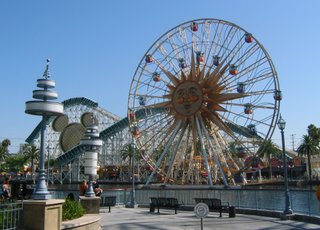 I have ridden tons of rides at theme parks and carnivals, but this one really got me, thanks to the "swinging" gondolas. Most ferris wheels have stationary gondolas, as this one does along its circumference. This one has tracks inside the circle, and the swinging gondolas slide along those tracks as the wheel turns. ("Sliding" gondolas would be a more accurate description.) Of course, we waited in the longer line to ride in one of the swinging gondolas, which I stupidly thought would be fun. And they were. Until the ride started.

Once everyone was loaded up, we started to move and take in the sights. I pulled out the camcorder and had just pushed the "RECORD" button when--WHOOOOOOOSH! We started sliding! Since we basically were in a big cage with no seatbelts or lap bar, I just KNEW R&K were going to start flying around our gondola. Of course, they didn't get tossed around, but they were filled with glee because they could tell that Mom was SCARED. 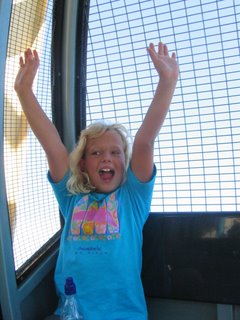 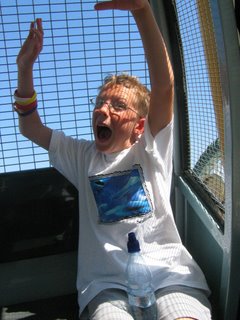 With every turn, we slid some more. I held on tighter, but R&K screamed with delight. What fun. For THEM.

I don't know why that got to me. I love roller coasters; I'm not afraid of heights. There was just something about that sliding sensation that caught me off-guard.

I guess nothing brings siblings together like scaring the living daylights out of Mom: 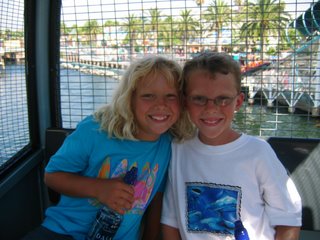 In addition to the Sun Wheel and California Screamin', other Paradise Pier rides kept us entertained: the Maliboomer, Mulholland Madness and Golden Zephyr.

We also managed to catch Soarin' Over California, which allowed us to hang-glide over some of California's famous locales. It was incredible how we could feel wind on our faces as we flew from side to side, and as we flew over an orange grove, we could smell oranges! It was a true sensory experience.

Back in the Hollywood Pictures Backlot, we rode the Tower of Terror again and tried out the new Monsters Inc. attraction. We also saw the phenomenal Aladdin musical. During our three days at Disney, we could barely walk through a turnstile or pay for a souvenir without being asked if we'd seen it yet, so we felt obligated to endure the long lines for this show. And yes, it was worth it! 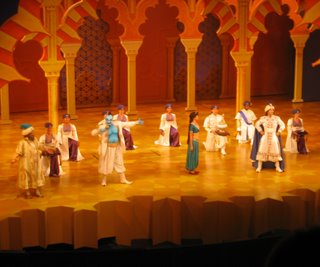 The genie was hilarious with plenty of pop culture references, and the special effects (the parade, the flying carpet) were impressive. 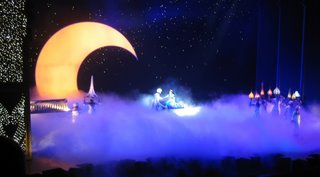 Before leaving we caught the Electrical Parade, which used to be a staple of the Magic Kingdom. It was pretty funky with all the lights! By that time, we were pretty tired, and I still had a long drive in front of me. We took a few more pictures of Paradise Pier before calling it a night: 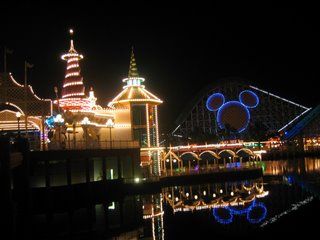 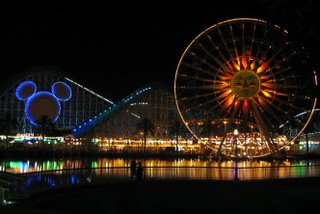 And that was the end of our third and final day at Disneyland and California Adventure. :(

Now it's time to say goodbye

To all our company.

P.S. Because he knew we'd be getting back to San Diego pretty late, B planned to spend Friday night with a colleague he'd met online. It worked out great! B and a couple of guys ended up eating dinner together and then hanging out in their hotel room talking about the convention and other things they have in common. It was probably close to 1 a.m. by the time the kids and I made it to their hotel to pick B up, so I was glad to know he was in such good company!