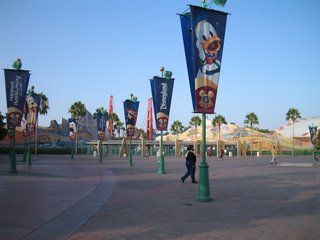 We arrived around 7, bought B's ticket and made use of our early entrance passes. It was great to first see Disneyland not quite so populated as it would be for the rest of our visit. 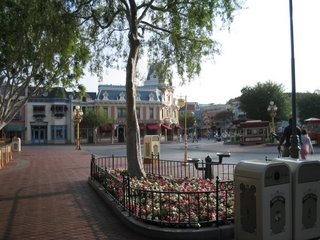 Anxious to ride something, our first stop was the Astro Orbiters. After that fun raise-and-lower jet ride, we took on Buzz Lightyear's Astro Blasters. This was perfect for the gamers among us! As we rode, we used the blasters attached to our cars to attack shape targets along the way. At the end of the ride, we could compare our scores. Great fun! But then again, EVERYTHING we did at Disney was great fun!

Before we left home, I had signed up for RideMax, a computer program that helps you plan your day at the park most efficiently, minimizing your wait times. After we hit those two attractions in Tomorrowland, we crossed the park to get on our printed schedule. First stop: Indiana Jones. This ride was pretty rough since we were loaded into jeeps that bounced through Indy's adventures. We had to face snakes, fire, and of course, a giant boulder. Whew! We also rode Big Thunder Mountain Railroad, a mine train-type ride. 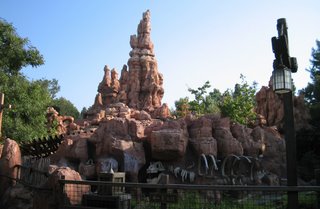 From there we made our way to Mickey's Toon Town. Many of the attractions in this area were for kids under 48" tall, but our main reason for going was this: Mickey's House! 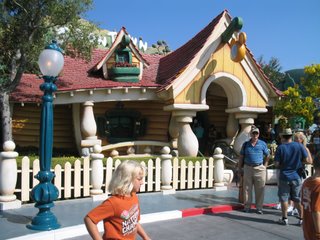 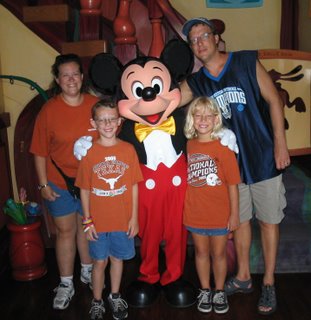 Yep! We got to meet Mickey! We also toured his house, which provided a nice, air-conditioned break after waiting a bit to see the Big Mouse. Down the street from Mickey's house was Roger Rabbit's Car Toon Spin, another spinning ride.

We knew we wanted to ride Splash Mountain later in the day, so I headed there to collect our Fastpasses. Fastpasses are amazing little tickets that make the day so much more pleasant! And unlike other parks that charge a premium for front-of-line passes, Disneyland allows anyone with a ticket to use Fastpasses. When I arrived at the Fastpass distribution area around 9:45, a sign let me know that a Fastpass would allow us to return between 11:30-12:30 that day. That ended up working perfectly! By the time we returned to use the Fastpass, the wait for Splash Mountain would've taken us 50 or more minutes. With our Fastpasses, we just waltzed up a separate line and walked right up to the ride.

Anyway, that morning we also toured the Haunted Mansion, which was one of my favorite attractions. 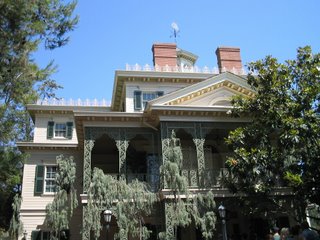 Because of the short wait and the cool spooks (and AC), it was a perfect stop for us.

Since we were there in New Orleans Square, we ate lunch at the French Market. I was especially impressed with the kids' meals served in Mickey plates. 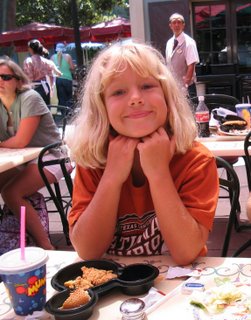 After lunch it was time to use our Splash Mountain Fastpasses and zoom to the front of the line. This flume ride took us through the story of Brer Rabbit (from Song of the South). When Brer Rabbit says, "Please don't throw me into that briar patch," you'd better hang on!

A great hat shop is right next door to Splash Mountain, so K bought her first (but not her last) Mickey ears. 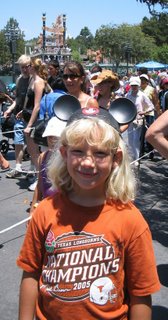 Splash Mountain didn't soak us as much as we'd hoped, but we did get cooled off enough to prepare us for one of the longest waits of the day: Pirates of the Caribbean. Pirates had been closed while new features from the movies were added, so even Disney vets were itching to see this attraction. Even though the line seemed to go on forever, it moved quickly. Some purists may not like the Jack Sparrow additions, but we gave the experience four thumbs up.

Before leaving that side of the park, we boarded the Mark Twain steamboat for a leisurely circle of Tom Sawyer Island. 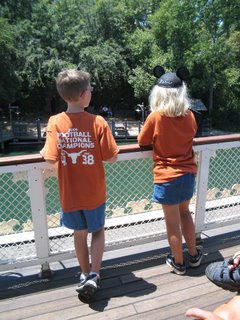 After that, it was time for the 50th anniversary Parade of Dreams. Nobody throws a parade like Disney! 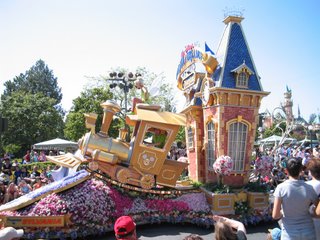 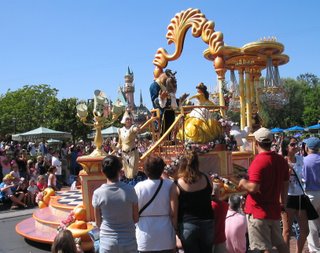 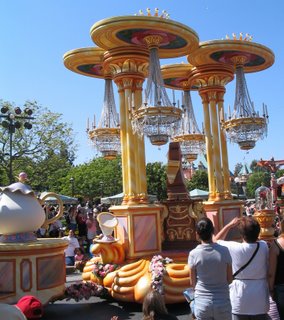 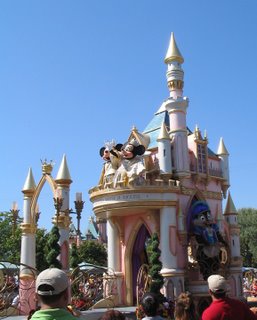 Even though it was only about 2:30 in the afternoon, we had worked our way through almost all of that day's scheduled activities on our print-out. That meant we were free to venture back to Tomorrowland and try more rides like Star Tours, Buzz Lightyear (again), and Honey, I Shrunk the Audience. Then we took on our favorite ride in Tomorrowland: Space Mountain! 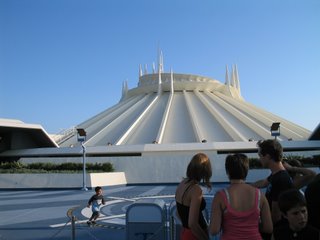 We loved this roller coaster! It's been improved since I rode it in '78, and we agreed that all coasters should come with theme music. Having a speaker right next to our heads to pipe in appropriate music made the ride that much better.

Before day was done, we rode the Matterhorn Bobsleds. Back in the day ('78), I used my E-ticket on Space Mountain, which means I didn't get to ride this attraction, much to my disappointment. It was great to finally get to try it! 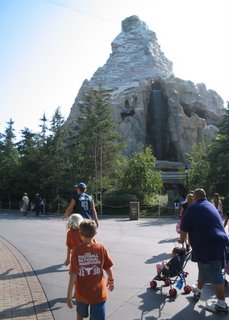 We also stayed long enough in Fantasyland to ride the Carrousel (even though I still don't know why it has two R's in the name), the famous teacups, and It's a Small World. We also had a decent spot to see the amazing fireworks show, complete with Tinkerbell flying overhead.

By the time we left the park and found our hotel (which, thanks to construction, had no parking available), we were pooped!

That sounds like so much fun! Are you going to go into the trip planning business? You sound like a natural at it! I will have to get tips from you next time we plan a vacation.