Four reasons to root for the Tennessee Titans. 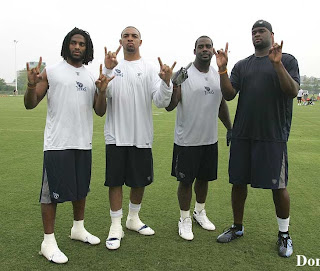 While I'm at it, I just have to mention this cool story I read about two current Longhorns, QB Colt McCoy and WR Jordan Shipley, who spoke at a Dallas church this week:

"From the stage they were both open about their faith and how they try to lead by example on the team. When asked about giving in to peer pressure, Colt replied that he and his friends are the peer pressure - they try to make other folks do right." (the rest of the post on Hornfans.com)

Considering a couple of our players have been making headlines for poor choices, it's great to see positive role models on our team!