Our yearbook publishes senior ads--you know, those little blocks of sweet "We're so proud of you" text along with baby pictures. Today I was looking over this year's batch, just about ready to send them to our publisher, when I happened to notice the date printed on one snapshot of a smiling infant: October 1989.

So I'm thinking, October 1989? But that's only 6 1/2 years before Ryan was born! Of course, since the day we found out he was on the way, we've known he'd be in the class of 2014. In any case, the realization that in six years he'll be a senior in high school hit me. Hard.

How did this happen? Just a few months ago he was in diapers. Several weeks ago he started kindergarten. And now, all of the sudden, we're barreling toward his driver's license and SATs and college apps.

But we're not there yet! Today he's in sixth grade, making his literary element mobile and wearing it! So here's to today. 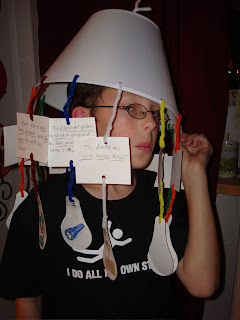 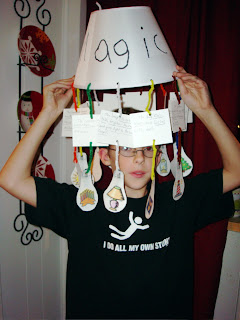 Ryan's element is the Magic Three. Not familiar with that one? My creative, literate and hard-working son used light sources to demonstrate that concept. He found appropriate pictures, wrote exemplary sentences and attached them all to a lamp shade. He could've phoned it in. He might've used a regular coat hanger. Instead, he had a bright idea! Got it now?
Posted by See-Dub at 10:08 PM

wow. so if Ryan will be a senior in 6 years, that means that at that time I'll be 30 years old. Way to go Aunt Charis. I'm officially old. :)

Wow! He is too smart for me!

Huggie, you're talking to a woman who has eight weeks left in her 30s, so you are FAR, FAR, FAR from old! ;)