For a couple of weeks, I'd been looking forward to this weekend. A friend and I planned our great escape to Amarillo for a friend's birthday party, and we planned to leave Friday afternoon so we could enjoy a full day there before the big event. We planned to do some tourist-y things, but mostly we just planned to enjoy some time away from our usual responsibilities.

You can see where this is going.

I woke up at 3 a.m. Friday just sick as a dog. And not just any sick: STOMACH sick.

Later that morning I texted my friend to let her know I wasn't feeling so hot, so she said she'd check back at 3 to see if I could make the trip or if we'd have to wait until Saturday morning to try the drive. I was so disappointed, and I just hated having to disappoint her, too! Around 2 I started packing and got in the shower, optimistic that I was feeling a little better, but no. I could barely even make it from the shower back into bed because I was so nauseous and weak. 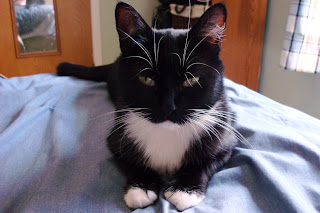 KitKat knew something wasn't right! She kept me company Friday.
After a quick phone call, it was decided that if we made the trip Friday, I would only end up puking all the way up 287. The trip was postponed. I then settled in, praying for quick relief. I was just drifting back to sleep when...

...nothing. The TV turned off, the room went dark, the fan stopped. Just GREAT.

For the second time this week, our power was out! This time there was no storm, just a tree service working near powerlines a few houses down the street. We tried to ride out this outage, but my messed-up stomach couldn't handle the heat. We packed up and headed to Brett's parents' house, and in the frenzy to get ourselves out of the sauna, I just about passed out.

Brett's mom took good care of us, even though she was recovering from a migraine, and she barely had time to make our bed before I collapsed in it and took yet another nap. When I woke up, I called the house, heard our answering machine pick up, and knew we had electricity again!

This morning I woke up feeling MUCH better, which confirmed that the bug was of the 24-hour variety. And as it turned out, my illness helped us surprise our Amarillo friend all the more! He didn't know we would be at the party, so when he opened his front door, he kept looking at me: "But you're sick!"