Our reason for heading to Amarillo this weekend? This guy's birthday! 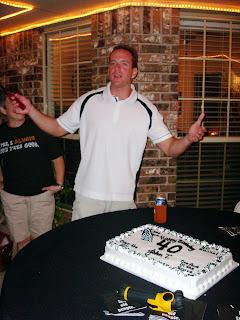 T and I have been football buddies since 1988 when we met at the University Avenue church in Austin. Several of us who lived off-campus would eat lunch in the student center there at the church, and his affinity for ESPN and, of course, the Longhorns, helped us bond. When my friend Greg and I first got our season tickets in the fall of 1991, T was living in Amarillo, but within a season or two, he had joined our motley football crew. Now he's the ringleader, coordinating the tickets and heading up our tailgates. 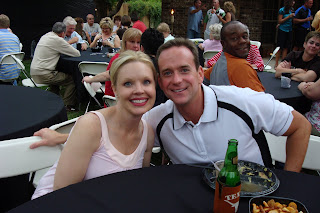 T's wife, Amy, came up with the idea for this backyard party after watching HGTV's Design Star. She did a great job with the decorations and all the food. A local singer entertained everyone with music from a variety of artists, from the Beatles to James Taylor. 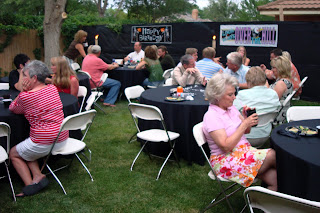 It was great to see a lot of our tailgate friends, but it was more than a little strange to see them in this setting as opposed to a parking lot on the UT campus! I kept feeling like a football game should follow the night's festivities. 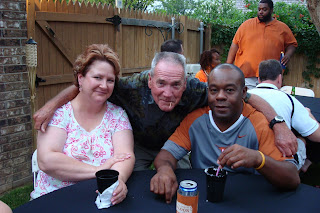 Dede and I surprised T, as did these two friends (shown with T's dad). Ned has been T's best friend since they were in first grade. We were so glad to get to see him and his wife. Ned has accompanied us to more than a couple of Texas-OU games. 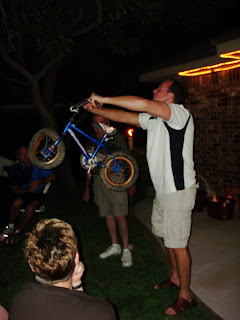 Another highlight was getting to see T's mom, dad and sisters. His sisters razzed him appropriately, and his parents gave him back his first bicycle, a worn-out old thing they'd tracked down. Too funny!