The Dec. 3 #reverb10 prompt: Pick one moment during which you felt most alive this year. (Author: Ali Edwards)

Outer Banks, North Carolina. July 15. The day we swam in the Atlantic Ocean for the first time.

We first saw the Atlantic as we crossed a bridge leading to the Outer Banks, and we could catch glimpses here and there as we drove down Virginia Dare Trail, the road that runs parallel to the shore. But it wasn't until after parking at a public access point, packing up our beach towels and sunscreen, and walking along a sandy trail and down a wooden staircase that we REALLY saw the ocean.

It was the Jaws beach.

OK, not really. The Spielberg flick was shot in Martha's Vineyard to our north. But at first sight, we instantly knew this was not the Pacific and was far from the Gulf. There was something about the clapboard beach houses atop the sand dunes and the wompy sticks that together passed for fences that screamed EAST COAST. 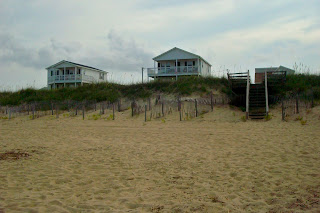 And that was just the sandy part of the beach. Once we actually stepped into the water, we noticed that unlike other beaches that are mostly muddy at their shallowest, this shoreline was predominantly gravel. Our feet sank through the pebbly mixture of rocks and shells. While this was a great exfoliant, it made wading difficult! With each step, our center of gravity would shift, and we'd struggle to stay upright and above water. 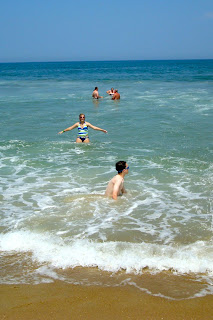 Seeing and experiencing the beach and the Atlantic made it a great day, but the moment I relish was when Brett and the kids were swimming and I was alone on my beach towel, taking it all in. 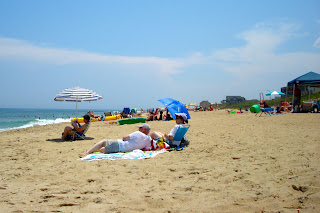 Touching the Washington Monument. Walking up the steps to the Lincoln Memorial. Seeing the Potomac from George Washington's porch. Our vacation was filled with many "pinch me" moments when we all were keenly aware of where we were, so very cognizant that we were standing on historic soil. But I felt the most alive there on the beach. That was 10 days into our two-week vacation. After so much driving and walking and seeing and doing, it was thrilling just to feel the breeze, to breathe in the salty air, to hear my family playing in this strange new place among the constant roar of the waves. 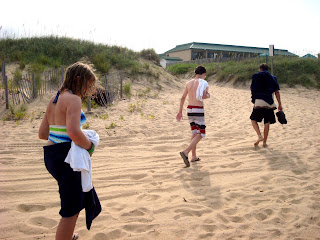