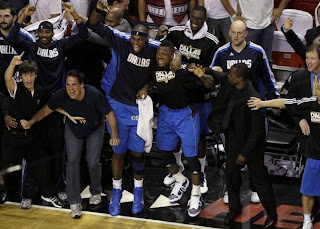 On Sunday, June 12, 2011, the Dallas Mavericks won their first NBA championship. It was such a thrill to watch this group, this hard-working, unified TEAM, bring home the O'Brien trophy.

As we watched the trophy presentation, we were touched when Mark Cuban let original owner, Don Carter, be the first to hold the trophy. Then Cuban was quick to pass it on to Dirk Nowitzki, the team's and the finals' MVP. 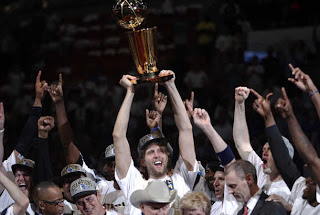 As Dirk lifted the trophy over his head, I said, "There's your money shot!" 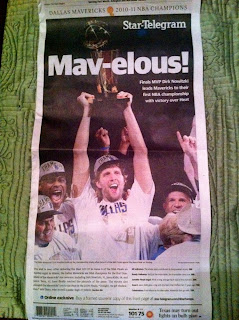 Sure enough, the next morning that money shot was on page 1!

It was great to see all the celebrations on TV, in the paper, even on store signs around town. Brett was especially thrilled to see this team that he has followed since its inception finally get it done. 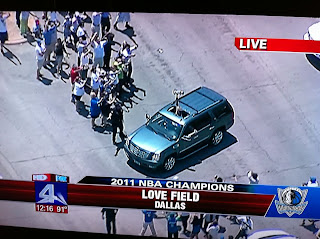 When the team arrived home the next day, thousands showed up at Love Field to welcome them. We stayed home and watched on TV, but I still got goosebumps when Cuban emerged from the plane with that trophy. The players were so gracious, too, reaching out to the fans who had waited for hours in the heat to see the team.

On Thursday of that week, Dallas celebrated with a victory parade. Again, we stayed home, choosing to watch from our air-conditioned living room. And again, it was still exciting to see the joy in everyone's faces, from fans to team staff to journalists to players.

After the parade and before the celebration headed inside for season ticket holders, the team greeted the many gathered outside the AAC. By this point I was driving Katie to a friend's house, so I heard this on the radio. Still, it made me laugh out loud.

What a great moment!