On our honeymoon, Brett and I went to San Antonio. While there, we found no fewer than eight or nine used bookstores. It was fabulous! We hit the streets with a big ol' map of San Antonio, our trusty Half Price Books bookmark, and names and addresses of stores we'd found in the hotel phonebook. 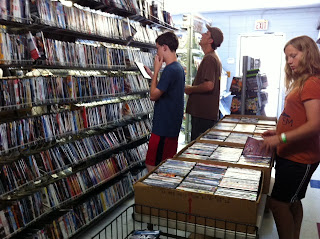 Now, 17 years later, we continue that ritual, just with an iPhone! I know that as we travel, we will include at least a couple of stops at stores with used books and games. On this trip as we cruised New Braunfels, Brett discovered this place, D-Pad. With its used DVDs and games, it merited two stops before we left town. 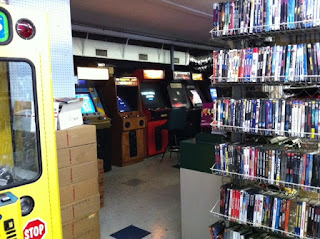 Behind the store's shelves was this quirky little arcade. Around the corner from that was a darkened room where some guys were playing games online. (Kinda freaked me out a little to hear—but not see—people shouting orders!) 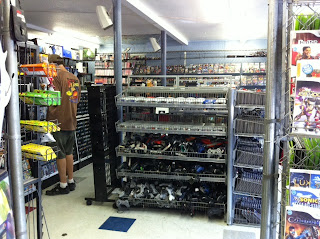 What's cool about these game stores is that they're usually amenable to taking a stack of flyers advertising Brett's book.

Just another part of vacationing with the Dubs!
Posted by See-Dub at 11:51 PM