Friday nights have long been our family nights. We'll grab a bite; we'll watch a movie together. But this Friday we hit Six Flags. It was great! We found short lines, less-than-blazing temperatures, Brett's cousin from Marshall, and a martian named Marvin. 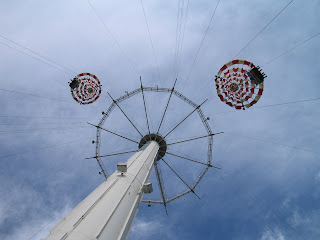 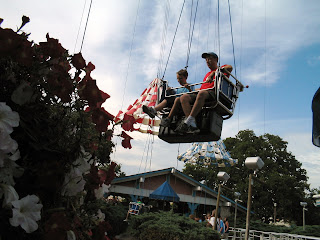 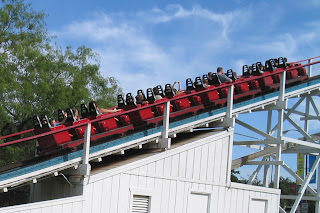 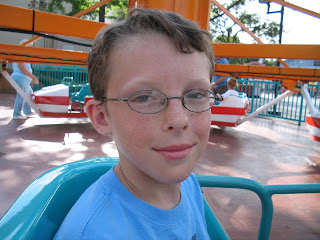 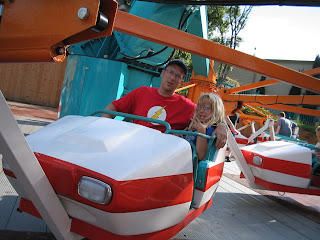 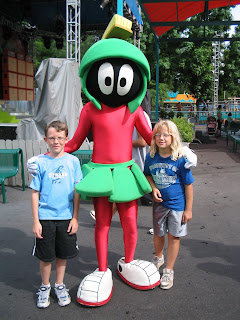 While in Gotham City, we were stunned to run into Rick and Kristen, Brett's cousin and cousin-in-law from Marshall! It was great to see them, catch up a little, and see how big their son Ben is getting. We also got to meet Kristen's stepbrother and nephew. What a pleasant surprise!

Our one near-disappointment came around 8:15. We had saved the Titan--our all-time favorite ride--for later in our visit, but when we walked over there, discovered it had closed at 7 p.m. because of a gala in the picnic pavilions. (VIPs were celebrating Saturday's Coobrila premiere.) Anyway, we were bummed, but we talked about how we'll just have to ride it extra times on our next visit. Well, four turns on the Conquistador later, Ryan and Katie notice the Titan's running again. We head over there to discover that yes, it's running, and NOBODY'S in line! We rode it five times in a row! By then it was dark, and nothing compares to riding a roller coaster after dark!
Posted by See-Dub at 11:35 PM

Yea, Six Flags! Sounds like a great time. My kids aren't into the big coasters yet, maybe this year. How funny you ran into relatives there. It's a small world.

Oh, I love Six Flags. The Titan is the best!! I am so glad that Chase likes to ride it. Dylan has not worked up the courage for that one yet! We will have to go together some time this summer.